After doing an analysis of Justice yesterday, I figured I’d take a look at another upcoming set, X-men Forever, as well as its team packs.

As with Justice, I am not analyzing the meta value of these cards; rather, I’m looking at the spoilers to find any hints as to what was not revealed yet. While we do not have nearly as many cards spoiled from this set as with Justice, there is still some interesting data to be found here.

Before I begin, as I did yesterday, I would like to give a shout-out to two sources I will rely on throughout this article.

The first is DMArmada. He recently made a fantastic video outlining all of the known (and a couple of new) spoilers from the X-men Forever Campaign Box and related team packs. You can check out his video here.

The second is the Dice Coalition. They’ve been providing us with some breaking news about this set from Worlds, and they’re one of my go-to sources of information on Dice Masters. You can check them out at dicecoalition.com for tons of awesome Dice Masters content (including their awesome team builder, which we regularly use in our articles).

Let’s dive in, shall we?

Let’s begin by looking at the campaign box. At the back of the box, it states that it includes “62 Character Cards”. Right off the bat, we can tell that no matter the number of characters, we will not get 3 cards per character; 62 does not evenly divide by 3.

Now, let’s look at who we’re getting in this box. Here are the character cards from the campaign box that we know of:

We also know, from the original ICV2 article, that the following characters are in:

Looking at the description found at the back of the box (originally shown on The Dice Coalition), the following characters are expressly mentioned :

The cards shown on the back of the box also seem to feature (in addition to characters already known): 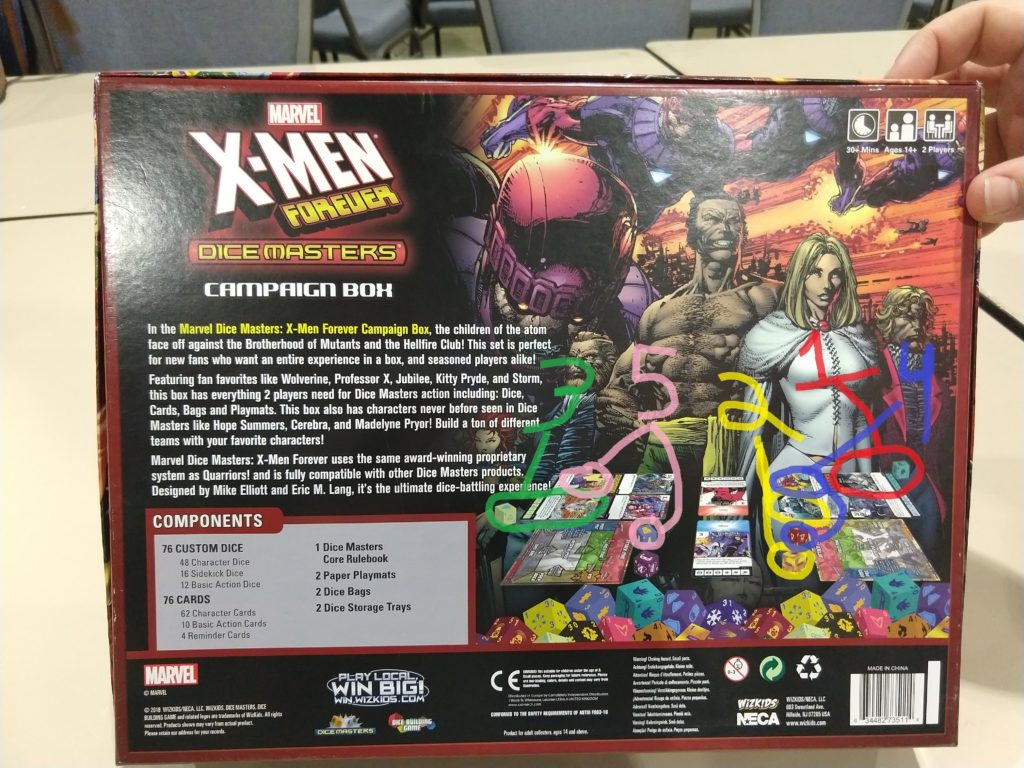 As a side-note: while I don’t focus on the BACs for this, I’d be remiss not to mention that one of the BACs shown on the back of the box (the one that’s right-side up) is a reprint of Teamwork, a classic BAC previously only available in an OP kit. This is a needed reprint for sure; thanks, Wizkids!

Now, looking at the dice found on the front of the box (which we originally revealed here), we can see dice for: 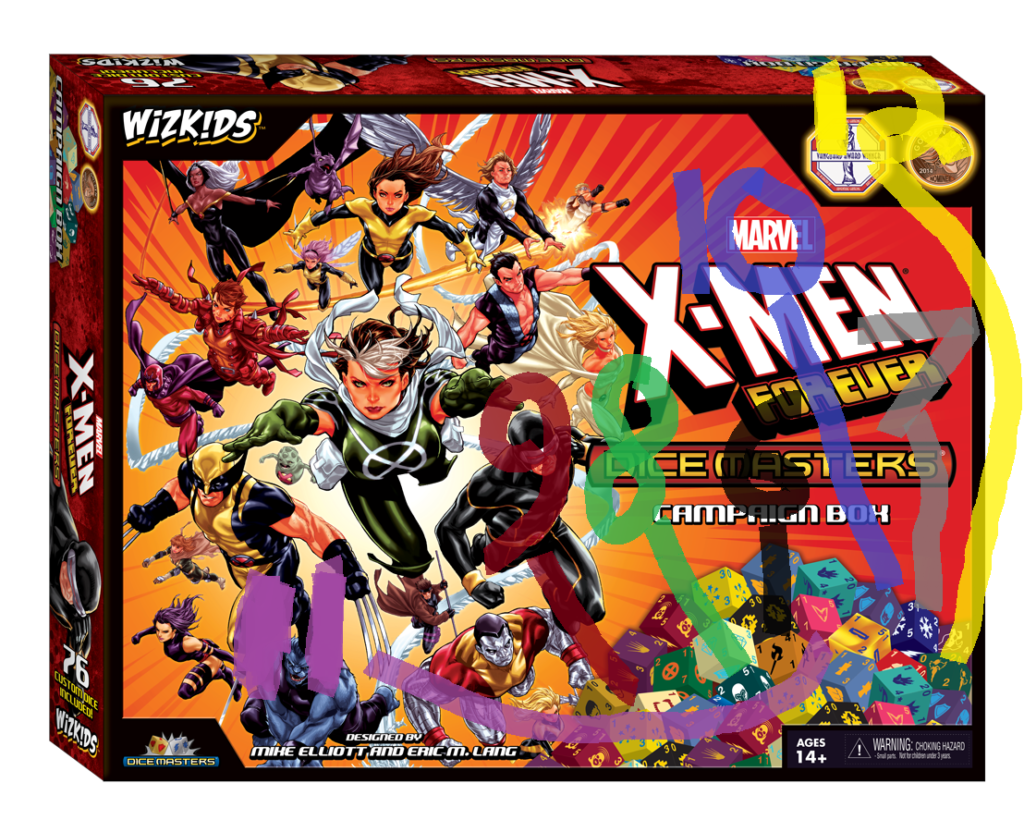 Note that there is a die that looks like the old Phoenix die from AVX (11). While it’s not certain, I believe that this is the die for Hope Summers. I would not assume that Phoenix is in this set as of yet.

As for the new green die (12), I believe this to be Cerebra’s die. I originally thought that it was Storm, but the back of the box shows that her die for this set is a recolored version of her die from XFC and DP.

With all of this information, we know that the following characters are in this set so far:

This means that we have at least 23 different characters in this set. Yes, seriously.

Now, even though we have only seen a few cards from the set, we can still tell, from the card numbering, where some characters may only have 2 cards.

Between Blob (7) and Kitty Pryde (30), we know of 8 different characters, with only 22 cards. This is two cards short of what is needed for 3 cards per character. This means that at least two of the following characters will only have two cards: Cerebra; Cyclops; Donald Pierce; Emma Frost; Hope Summers; Iceman; Jean Grey; Jubilee.

We also know that there are only 17 character cards after Mystique’s last card (from 46 to 62). However, there are 6 different characters, so we’re one card short of the amount needed to have three cards per character. We thus know that at least one of the following characters will only have two cards: Professor X; Sabretooth; Sebastian Shaw; Sentinel; Storm; Wolverine.

Now, there are a couple of other points I want to draw your attention to. First of all, as with Justice, we will only have 48 character dice in a box. With at least 23 characters, that’s an average of barely more than 2 dice per character (with all characters shown so far being “Max: 4”). I would plan, as with Justice, for the possibility that buying two copies of each campaign box will be far more important than with previous campaign boxes.

Another point to keep in mind: somehow, this set has one less card than Justice, but while we know of 22 characters/non-basic actions for Justice, this set has at least 23 characters. Less cards but more characters? That doesn’t sound right. Do not be surprised if at least one more (as of yet unknown) character is shown in Justice.

That’s all we know with respect to the Campaign Box. The team packs, however, have their own secrets to reveal.

This team pack actually has a limited amount of information available. Cards from this team pack are labelled “of 24” with a dark “X” on the top right of each card.

Only one card has outright been shown so far, with another being partially shown in the front of the team pack. We thus know that the following will be in the Team Pack:

Based on the description provided in the original ICV2 article, we know that the following characters will make an appearance:

Based on the dice in front of the team pack, the following character will also make an appearance: 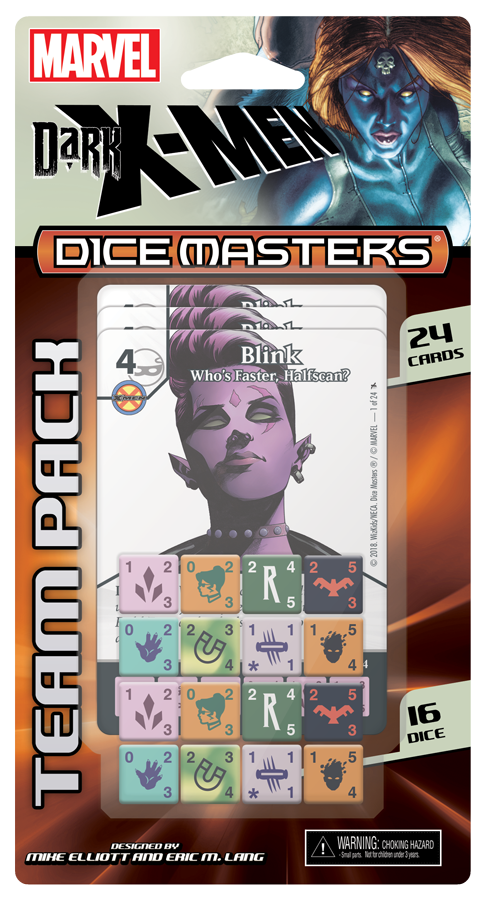 This leaves us with two characters with new dice who are unknown. Looking at the card numbering, we can determine that Blink is, alphabetically, the first of eight characters in this team pack. Rogue, on the other hand, is fifth.

Filling in the other characters we know about, we have the following order:

What should be striking from the above isn’t so much who is in but rather, who isn’t. People speculated that the orange die with green font might be a new die for Mystique, but she doesn’t fit (plus, she’s already shown to be in the campaign box). This also makes it certain that Daken won’t be in this team pack. Both unknown characters’ names must be after Rogue’s.

Looking at the orange and black die on the right, I’m thinking it might be Sunspot based on the logo (he’d make more sense in X-Force, mind you). I’m at a loss as to who the other missing character would be, though. I’m willing to listen to any suggestions.

EDIT: In the comments, Reg suggested Sage/Tessa as the missing character. Now that he said it, I’m sure he’s right. Nice call, Reg!

Cards from this team pack are identified as being “of 24” with a logo matching the one on Cable’s die at the top right of each card.

So far, four cards from this set have been shown:

In addition, the front of the team pack shows dice for: 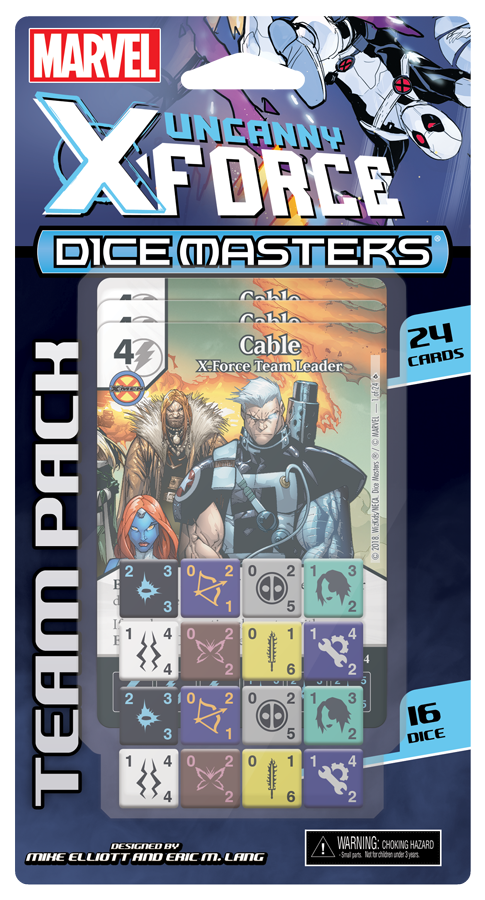 This means that only one character is unknown. However, the card numbering gives us some good hints as to who it may be.

Based on card numbers, in alphabetical order, Cable is the first character, Deadpool is third, Forge is sixth, and Psylocke is the eight and final character. If you fill in with the other characters we know, this gives us:

Looking at the die for the missing character, we see a logo showing a bow and arrow. I thus believe this character is Dani Moonstar (aka Mirage), an X-Force member known to be an expert archer. This is speculation, of course, but it fits almost too perfectly.

And there you have it. Thanks again for tuning in to this deep delve into the spoilers for X-men Forever. This is a set we won’t be seeing until March, but I’m definitely looking forward to seeing more information about it. There’s so much to look forward to (including those sweet black sidekick/BAC dice!).

Again, if I missed anything, feel free to discuss it in the comments down below or over on Facebook. Let’s keep on rolling!

EDIT:  Made the pictures bigger for the old folks like me.  – jourdo.

EDIT: Added a suggestion from the comments that is way too brlliant to ignore. -ccm00007