World Wrestling Entertainment is set to invade the Dice Masters world next week in North America.  This set looks to be sending the game back to a combat damage driven meta (no more skipping the Attack Step).  Lots of cards have been spoiled recently from the likes of DM Armada, and the Royally appointed Ministry of Dice.  Wizkids has been kind enough to allow us onto the spoiler train.  As soon as I saw the die in the early spoilers, I knew that there was really only one character that I wanted to spoil, and Wizkids was kind enough to give us that opportunity.  Queue up your best announcer voice…

The Excellence of Execution…

The One… The Only… 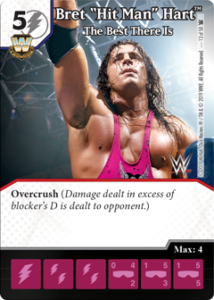 The Best There Is

Let’s start things off with a pretty straightforward ability. Having Overcrush with these stats is actually pretty nice!  He is essentially a bigger Thunderwolf Cavalry with better fielding costs.  With that low D of his, he’s so tempting to block with weaker characters… but then that Overcrush kicks you in the teeth. I love the fact that your Opponent is forced to pick their poison.  Very interesting design choices on this card. 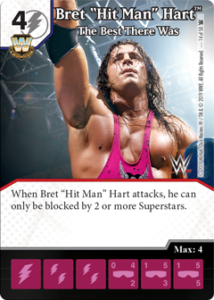 The Best There Was

This one is a pretty solid package. We get 4 to 5 attack on a 4-cost, good fielding costs (good thing too, with his low D on level 1 and 2), and an ability that is tailor-made to sneak damage through. Attack with 2 or 3 of these, and you’re giving your opponent headaches. This is a solid card for sure. 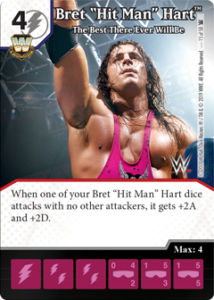 The Best There Ever Will Be

For the third version, we have a card that screams, “Use me with Parasite!” Seriously, if he attacks alone, before any other buffs are calculated, he is a 7A/7D at level 3. On a 4-cost! Throw Parasite in there and he can easily get to 10A. Use him with another ability (e.g. Upgrade – Proton Cannon) to give him Overcrush, and you’ve got yourself a beatstick to be reckoned with.

And now, that’s it for this character…or is it?

As we had originally predicted, Bret “Hitman” Hart is also featured in the Bitter Rivals Team Pack!  We need to figure out where ccm00007 got that crystal ball of his. 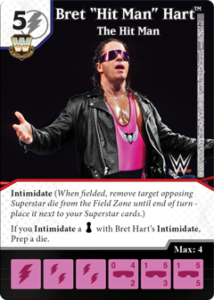 A card that combines ramp and removal all in one?  Yes please! Intimidate as a keyword is becoming increasingly relevant (especially because of a certain action that catches gods), and he combines this useful ability (with no restrictions!) with the ability to draw more dice if you target a Sidekick die. This may sound silly, but if you target a Sidekick, that’s one less Sidekick your Opponent can chump block with, and one more die you get to use the next turn.  Then you can attack with 4-5 damage.  Not bad at all! 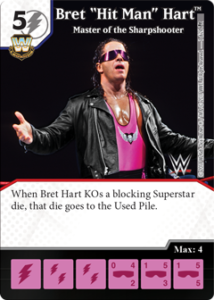 Master of the Sharpshooter

Master of the Sharpshooter? More like master of shenanigans! Sending opposing characters to the Used Pile is always a powerful ability, and here it stands out due to his solid offensive stats.  Are you sure you want to chump-block this guy?  You won’t get your blocker back!  Also, let’s not forget that his ability is not restricted to combat damage.  Use him with Confront The Mighty, or heck, just give him Deadly!  The possibilities are endless.  Don’t sleep on this one. 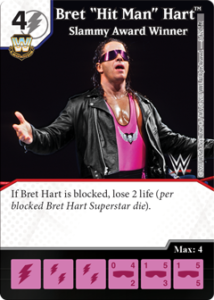 Your Opponent loses 2 life when they block him?  Awesome!  Wait… what do you mean “read it again”?

Ok, this one isn’t for the competitive types, but that doesn’t mean you can’t have some serious fun.  Looking for an easy way to trigger Earth X Captain America or Silver Surfer?  You are essentially telling your opponent, “let him through or suffer my shenanigans”. Considering his stats, I bet your opponent will choose to deal with shenanigans.

There you have it.  An early look at the Canadian contribution to the upcoming Dice Masters sets.  These have been kind of our “first impressions” on what we see here.  I’m sure as we have more time to digest, our opinions may change.  Is there one card that stands out for you?  Tell us what you think about The Hitman in the comments below.

One Reply to “WWE Spoilers!”