Going back a little bit for this one, as a family commitment meant I couldn’t make the weekend event, and while the One Card event was interesting I don’t think there’s much to say about that wasn’t already available in Jourdo’s One Card to Rule Them All article.

This was an Unlimited Golden Age constructed event.

So what happens when you use Rare Black Adam with an assortment of deadly characters? 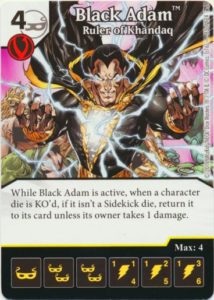 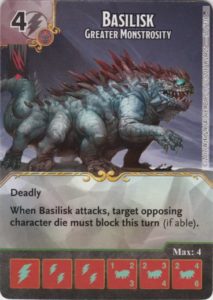 When Black Adam it out, when a non-Sidekick is KOed its owner has to choose between accepting chip damage and returning that character to its card.  Basilisk pairs well with Adam, since if you don’t attack with anything else, or at least everything else you attack with has Deadly you get to impose the above choice on your opponent.

Sidekicks are immune from Adam’s effect, so I added the Doctor Light which prevents my opponent’s Sidekicks from blocking.  That means each time I attack with a character with Deadly I’m going to go at least 1 damage unless my opponent returns a character to their card.

Next I added the Captain American from Maximum Carnage that gives Sidekicks Deadly.  That’s a ‘When fielded’ effect, so might want to get it out of the field, and it’s D is high enough that I can’t rely on combat damage to get the job done.  That was most of the reason I added the Uncommon Free Chimichangas action from Deadpool.  That is a 3-cost mask that gives a target character die +2D and Deadly.  It doesn’t have to be my character, so I was thinking one way to get Cap out of the field when I wanted would be to attack with Cap and use Chimichangas on whatever blocked him.

Fielding costs skew a little bit high on the characters I’ve listed so far, so I added common Nick Fury from the Thor set.  If my opponent had a Villain in the field, my fielding costs become a non-issue.  And if my opponent isn’t running any Villains I can just ignore him.

I rounded out the team with a Black Widow and a Karnak, each with Deadly.  Basic Actions were Resurrection for a bit of ramp and Rally! thinking it might help me get some more Sidekicks out for Cap to make Deadly.

Common Larfleeze, Insect Plague, Golden PXG, and Parallax.  He got Larfleeze out and used the Insect Plague global to pound me with massive unblockable Sidekicks.  I knocked his Larfleeze out each turn by attacking with a Basilisk, but with Parallax and plenty of energy from old school PXG, he came back every time.  Three unblocked Larfleeze-kicks and it was game over.

Teen Titans team with common Wonder Girl (Cassie Sandsmark) and uncommon Ring of Magnetism from YGO .  Used together that means my action dice and abilities can only target Wonder Girl, and she can change the target to one of my character dice.  Annoying as that was, the Rare Cyborg from GAF was worse.  They can block an extra character die, and take no more than two damage from each non-crossover die he blocks.

I got a Basilisk out early, and kept attacking with it for chip damage,  I also bought both my Captain America dice and got some more chip damage when I fielded each, but he kept blocking both my Level 3 Cap dice with his one Cyborg die which only took 2 damage from each Cap die due to his ability, which, since it was 5D, wasn’t enough to KO it.  And the Wonder Girl – Ring of Magnetism combo meant I couldn’t use the Chimichangas action to give Cyborg or either of the Cap dice deadly.

He got enough Titans out that he started buying his Starfires and dealing me significant chunks of burn damage.  I had Doctor Light out, which had allowed me to continue doing some chip damage, but I’d had to be careful about it – he’d built up a decent wall and I couldn’t give  him the opportunity to knock out too much of my field when he’d reroll his KOed characters before I would.

I estimated I had one turn to live when I somehow got enough characters in the field to outnumber him to get to lethal for a very hard-earned win.

This was a use Tabaxi Rogue and burn your opponent to death team.  I’d attack with Basilisk and KO his Tabaxi Rogue and he’d roll a character face on his initial roll on the next turn.  I made a flippant comment about that, and it came up energy on the roll and reroll his next turn.  As I had Doctor Light out, and he hadn’t bought much in the way of other characters and didn’t have any non-Sidekicks in the field that proved his undoing.

If you follow the comments, you may recall Jourdo and True Mister Six describing Rare Black Adam as one of the “Never had their day” cards.

I enjoyed playing this team, but in playing it I think I got a pretty good idea why this card never had its day:  it takes too many other cards too make it effective and/or dangerous.  Adam himself is a 4-cost, Basilisk is a 4-cost, Doctor Light is a 4-cost.

4-costs aren’t exactly unreachable, but if you need to get 3 or 4 of them into your field before your team really gets humming  it’s not exactly a top-tier team.

Not counting the bye, I did won two games with the team, but in both those games my opponent looked to have me on the ropes.  I managed to eke out wins both times, but the team isn’t exactly a juggernaut.