Format – Modern Civil War!
Additional info: Using modern legal cards, craft your team to feature either Iron Man or Captain America! Beyond that, your team may only consist of ONLY bolt or/and shield energy type cards! Crossover characters that include at least one of those types may also be used! 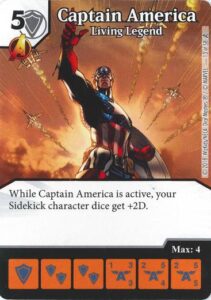 You fine folks get double of me this week for another WHYP article! As you can tell, I chose Captain America. I found his abilities better then Iron Man.
The Cap card I chose was when active, he gives sidekicks +2D, My goal was to get as much sidekicks out in the field, flip the A and D of those sidekicks by using Bizarro global, “Pay ‘shield’. Switch a character die’s A and D until end of turn.”. But how do I get the sidekicks a bit more beefy?. Since I will be flipping the A and D, I found a basic action card that gives all your characters a defence buff, Take cover, which gives all your active characters +2D and if rolled on an asterisk, an additional +3D to a character die. Why not pump some more with Eddie, Tag Out. If the sidekicks have a high D, do I go unblockable or overcrush? I went with overcrush as I can give all my sidekicks overcrush and +2A by using the new Typhoid Mary promo card. I haven’t used her card before, was excited to give it a try. Since Cap and Mary are 5 cost characters, I decided to put Proxima to help discount the cost. Now, I need a card or two to help field sidekicks. I went with Atlantis for the global, “Pay ‘fist”shield’. Move a Sidekick die from your Used Pile to your Prep Area. Field a different Sidekick die from your Used Pile.” which also helps to prep. Lita was a cheaper option and if she KOs a character die, I can field a sidekick from the used pile. Shields, I need more shields! The cheapest shield character that I thought of was The Spot, which has energize that reads “Target character die can’t block this turn”, which can come in handy when I fire off the overcrushing sidekicks. Lastly, to help buff, if I couldn’t flip the A and D and I rolled bolts, I put Invulnerability basic action card.

Nick brought a rush team with Rocket and Groot. My start in this game was off to a slow one as I couldn’t roll characters or field sidekicks. Nick was able to push Rocket damage through for 6 or 8? Plus he was picking off sidekicks with Shocking Grasp. Once I got going, was able to purchase Cap and Mary. Remember I mentioned that I would use the +2D from Cap for my sidekicks and then flip it? Well, Nick popped my bubble! He told me that Cap’s ability is static and won’s get flipped, doh! I needed to buy Take Cover (which is not a static ability) and hopefully roll Typhoid on energize to do some damage. Oh ya, this whole combo doesn’t work if you don’t have sidekicks in the field. When Mary finally came to play, dumb dumb me fielded her without re-rolling her, thinking she was a while active ability, doh doh! Luckly, with Bizarro, I attacked with her and flipped her A and D to get her KO’ed. Things weren’t working out as planned and Nick had quite a field. He was able to purchase 3 Seth’s, “Crosspulse – Deal 2 damage to all opposing Superstar dice.” in one turn to clear my board and go in for the win.

Ross had a similar team to mine but the majority of damage done to me was from Domino energize, “Deal 1 damage to target opponent and re-roll this die.” I think I had taken like 10 damage from her alone and Ross used the Atlantis trick (which I think Jourdo did in his MoDPDM games?). If you rolled Atlantis and had Domino the same turn, use Atlantis to put her to prep and any other dice you want. He was fielding sidekicks galore and everything was just falling apart for me. Energize is a tough one to roll! And I learned, from Ross, that Typhoid Mary, energize would happen at the end of the roll and re-roll step but the effect actually happens when you attack, “…at the beginning of this attack step.”. That’s cool!, you can field as much sidekicks as you can and then they would get their buff and overcrush at the attack step. Once Ross bought his Mary and energized, I didn’t have enough characters to block and/or big D to stop the overcrush.

Ryan had quite the team. He would do his damage by forcing me to re-roll characters. His main character was Foetid Bloat-Drone, “Deadly. When Foetid Bloat Drone attacks, all opposing character dice must block (if able).” He would pair Bloat with, Yellow Lantern Ring, “When a character die blocks this turn, reroll it. If it shows an energy face, KO it and Yellow Lantern Ring deals 1 damage to its controller. Otherwise, it remains in the Field Zone on its rolled level (it’s still blocking) ** Instead, Yellow Lantern Ring deals its controller 2 damage for each character die that rolls an energy face.” and Riddler “While The Riddler is active, when an opponent rolls or rerolls a die other than during the Roll and Reroll Step, deal that opponent 2 damage.”. Again, I was doing poorly and I think he bought every character on his team! Even the SR Thor from IG came out to play. I gave him tons of time to lineup all his characters and he got the win.

Everyone I played was Team Captain America!
I think my brain was tired after a Saturday day of Dice Masters (MoDPDM, my article here). I could have built a much better team but maybe with the restriction, might have been tough? … nope, I got have been smarter lol I would definitely try Typhoid again on another team build without the restrictions.