Guess what everyone: I’m back! In-person events have now resumed in my area, and so I have more to write about. Sorry for my radio silence for the past several months. So let’s make up for it with some fun times here.

This week though, I was hoping I could run something casual and lighthearted, but in the end I…

Now, of course, this guy’s in. The big guns. The craziest direct damage engine in Modern Age Dice Masters. The one-man army of destruction. Thor. Field him, then field 10 characters and win. Yeesh. I never got the chance to run him before, since I only got him after we were forced to stop events last fall. 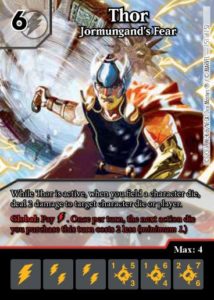 But I was only going to use him if I saw a nasty team on the other side of the table. If someone’s running a friendly team, I intended to be nice. Read on for the “friendlier” strategy. 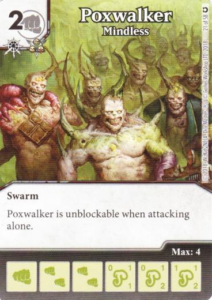 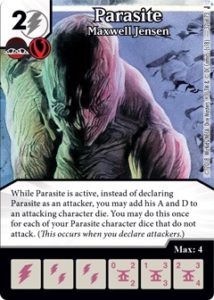 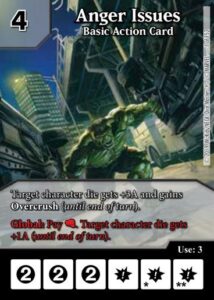 I decided to throw in the Supreme Intelligence global to make it easier to get my Poxwalker dice back. But I didn’t like the idea of saving up two energy for that purpose. So I also threw in Clayface. That way, I can save a mask on my turn, and on my opponent’s turn, Clayface in a die from used on double energy, then spend the two energy to Prep a Poxwalker. 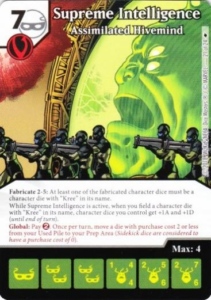 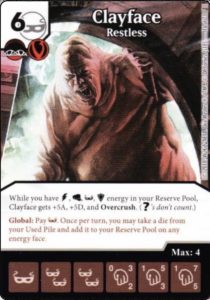 And with that out of the way, the rest of the team serves as utility. I put Drax in as control (primarily as the threat of control, as I’d prefer not having to use him). I also threw in Nefarious Broadcast as a counter to Static Field, with the added bonus that I can prep the Broadcast with Supreme Intelligence’s global if need be. 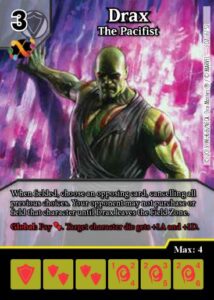 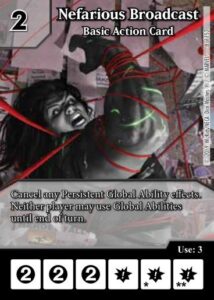 And the last two pieces? Atlas’ global for added ramp + churn (especially since I should have a fair amount of fists), and last but not least, Kree Captain. Two reasons: first, he’s a beatstick in his own right (helps that he’s buffed by my Parasites!), that can get Overcrush if I use Anger Issues. Cool secondary win condition. And second, his global makes it easier to get to Thor if that becomes necessary. 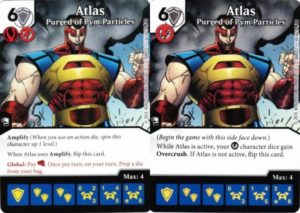 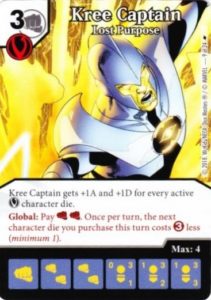 Now, sure, most of the team was built with friendly encounters in mind, but if I ran against a nasty team, I had a clear plan: Turn 1, buy a 2-3 cost (depends whether I go first or second) and use Atlas. Turn 2, I get 5 dice (usually 5 sidekicks). If I get 2 fists (Kree Cap global), a bolt, and 2 other energy, that’s enough to buy Thor. On Turn 2. But I was hoping not to have to resort to that. I mean, people are surely ready for something friendly and casual, right? (oh how foolish I was)

So for round 1, I stare down a team with…all of the nasty removal and control (Widow, Strange, Drax, Spidey, Typhoid Mary, etc.), and Asuka making 1-cost Kangs to rush me down after locking me down…Welp, ok, Thor it is. I bought Thor and got all my Parasites for ramp and to have more characters to field. And that was enough; because my opponent started with Asuka to discount his stuff, I ended up being faster than his control. One missed Typhoid Mary was all it took for my Thor to deal more damage than he could stop. I won.

Ok. Will I have a friendlier team to stop this time? …Nope. A Becky team. With Parasite to buff Becky and some of the nasty control. Also, Obscure (unblockable when using actions) Drow Mercenary as another way to hurt (to be clear, if that’s all it was, I would’ve gone the friendly route). Ooook, I guess it’s Hammer Time again. She did not like my Drax, so she went for an UC Angela early. Meanwhile, I bought some of the Investigation dice she brought and one of her Thrown Brick dice. The dynamic was odd. She didn’t have the energy for Becky, so she went for Drow, but that was almost enough to win; she managed to deal 10 damage with an unblockable Drow (buffed by 2 Parasites). I was trying to get the Parasite dice off the field, so I sometimes used Thor’s triggers for removal rather than for winning; it was an interesting balance. Then, on one turn, I KO’d her characters and the following turn, everything… and I mean EVERYTHING rolled energy on her side. Not the way I like to see a game end, but that happens when you roll dice. On my next turn, I swung into an open field and won.

And for the last match of the evening, Thor vs Thor. Except this Thor team is loaded with all of the nastiness: Spidey, Drax, Typhoid, and so on, with Collector to field sidekicks. This was going to be a rough match, so I went first, and did the strategy to get a T2 Thor. By Turn 4, I had Thor active and started chipping away at my opponent’s life. I knew I had to be the aggro to win since I had nowhere near as much control, and that served me well. She was trying to be slow and steady, and as a result, only got Thor 2 or 3 turns after me. She eventually managed to get a Typhoid Mary to blank Thor, but by that point, she had taken so much damage that all it took was for me to attack with Poxwalker (who, as the sole attacker, was unblockable) and buff him with Anger Issues’ global. I won.

We had enough time for a 4th round. I took the bye to facilitate matchups.

-I’d be lying if I said I wasn’t disappointed. I wanted to try the friendlier strategy, and it was never the right matchup. Ah well.

-Thor…even though he never got featured in my articles, you should already know: the guy’s a monster. A horrible monster. He’s awesome, but it felt dirty using this guy.

-Speaking of which, using Swarm dice alongside Thor just felt like peanut butter and jelly. Swarm triggers + extra characters to field just makes Thor that much more dangerous. As if he needs that. But if my opponents had been a bit luckier with their control, it might have made my life much harder.

-Also, it’s important to plan another damage source outside of Thor (either direct damage or unblockable characters of some kind). Your opponent will always try to shut down Thor, so those last few points of damage need to come from somewhere. Poxwalker played that role in the team, and did so quite well.

-The Clayface + Supreme Intelligence combo is fun; if you haven’t tried it before, I recommend it. Not only do you potentially get more energy during your turn, but essentially paying one energy to prep a die from your Used Pile is no joke.

-The threat of Drax made my opponents think about him a lot, but I never actually bought him; I literally just threw myself into aggro strategies without a care, but my opponents would always have my control in the back of their mind. This is why even if you build a purely aggro team, the threat of control is important to have.

-No, this was not an optimized Thor build. I’m not that cruel.

So, that turned out to be quite the week. That Thor feels like it could be very addictive to use; I’ll have to be careful not to let him become a crutch. But next week, we’ll be doing something far more fun: our entire team must be based around a single set. (No, jourdo, I’m not doing Turtles) What do you think I should try? I have an idea of where I want to go, but I may be willing to change my mind. So sound off in the comments!