For a second week in a row, we decided to run an event where we have to build our team out of a single set. After making Heroic work last week, i decided to try using a set that flew under most people’s radar: the Deadpool set.

By the end of it, my opponents were…

The Team:  This may be from Deadpool, but this team’s no joke.

Format: Single set (every card must come from same set)

Before describing this team, I need to clarify some of our event rules. First, any OP card is considered part of whatever set its die originates from. Second, if you choose a set with no BACs (from GATF to XFC), you must use BACs from the Iron Man & War Machine starter (if it’s a Marvel set) or the Superman & Wonder Woman starter set (if it’s a DC set).

So for the purposes of this team, note that the “Xavier’s School” OP cards count as being part of the Deadpool set since that was where their die came from, and my BACs must come from the Iron Man starter.

Since I went for the Deadpool set, let’s build around the most infamous card from the set: SR Multiple Man, running the full max 6. To make him work, I went for Wolverine (to negate his horrible fielding costs; didn’t expect to use the Regenerate side much) and Flying Car to put on Multiple Man’s card (with how many dice I’m running, that should get crazy!). Remember that per the Rules forum, Flying Car was errata’d to have Continuous. 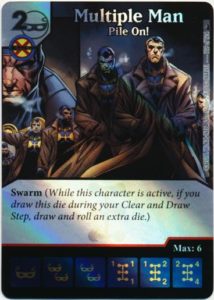 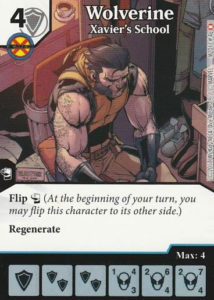 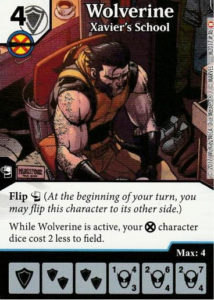 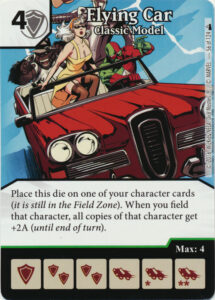 Now…so far, I have lots of Multiple Men, fielded for free, hopefully with big attack stats. But numbers mean little if my opponent has a lot of characters. How do I get damage through to my opponent? Overcrush seems like the obvious solution, and I have some fun options here. First, Colossus (might as well do the full fastball special with Wolverine!), with a big body and the ability to give Overcrush. Second, let’s throw in Upgrade – Proton Cannon to give myself another way to give Overcrush to my Multiple Men (they’ll be KO’d, but since I field them for free, that shouldn’t sting too hard). 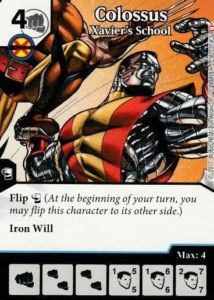 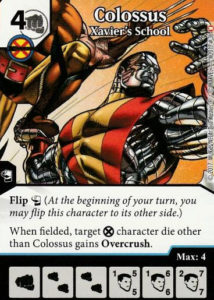 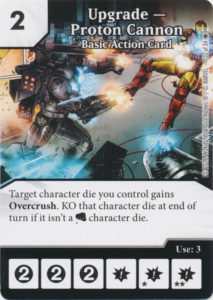 So I can try to win by “going wide” (having more characters) or by giving Overcrush to my characters. I threw in pieces to complement both ideas. First, Agent Carter. By making it more expensive to field sidekicks, my opponent should have less blockers in the long run, allowing me to sneak through more Multiple Men. Sure, it hits me too, but I wouldn’t rely on sidekicks for damage. 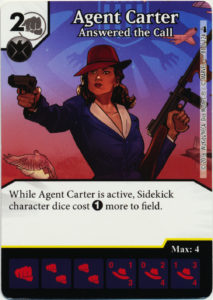 Second, Stepford Cuckoos. Recurring removal that allows me to thin out my opponent’s board each turn with free-ish fielding costs. Added to Agent Carter’s tax, my opponent should have a really hard time keeping characters on their field. 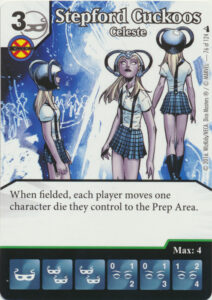 And last but not least, Cone of Cold. It actually helps both strategies. First, the action itself can do mass removal of smaller characters (perfect before fielding the Cuckoos!), Second, the global is a classic piece to help Overcrush. 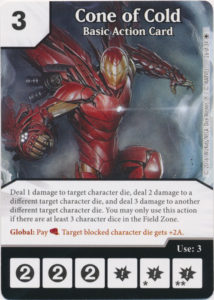 As for the last two cards on the team, they’re complementary pieces. Elektra can counter any Static Field-like globals (but then I can’t use Cone of Cold’s global; however, if she’s needed, that’s a worthy sacrifice to make). And last but not least, Wolverine, Lord of Vampires is a really fun SR I like to throw in when I can. Recurring damage + life gain with good stats comes in really handy. I just wish he had the X-men affiliation so the non-vampire Wolverine would help his fielding costs. Can’t win ’em all… 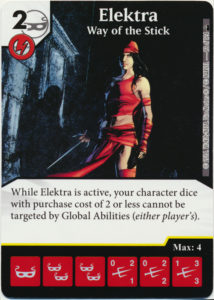 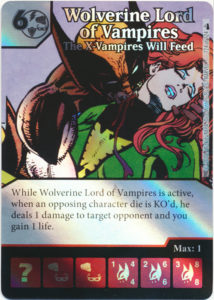 For my first match, I went up against a UXM Villains team (interesting choice!) with the UC Mister Sinister that has a Retaliation-like effect. Now, my opponent brought PXG. Since I rely on low-cost Mask dice as my main strategy, I had plenty of masks to use PXG. Agent Carter was so annoying that my opponent focused on her. That gave me time to focus on setting up my win condition, and since I had Wolverine active, I just fielded Multiple Men and attacked at every opportunity, keeping my opponent’s field thin. On my last turn, I fielded 3 Multiple Men (with one already active) with Flying Car on Multiple Man’s card, while rolling a Proton Cannon BAC and having Wolverine active (plus others). My opponent had only two blockers. We didn’t even count the damage; it was overkill. I won.

For round 2, I went up against a Warhammer build. He had the Thunderwolf Cavalry with Overcrush + Grey Hunter with Deadly, both of which were a real pain in the rear. However, the real pain was his Might of the Astartes. That BAC forces me to pay more to field, partially negating Wolverine’s discount. Fortunately for me, I had the advantage on ramp and churn. My opponent never got his Swarm going, getting his Astartes dice and his win condition early. His bag was more messy, whereas I went for my Swarm dice early. My opponent got a lot of early damage in, but when my Swarm got going and I started getting more characters on the board, he didn’t have an answer. I won this one by relying on Cone of Cold and Stepford Cuckoos to thin his field, then charging in.

For my last match, I went up against someone who was exempted from the team-building rules due to special circumstances. He had a team based on the Thanos that doubles Overcrush damage, alongside some good removal and control (e.g. Pip, Drax, Dr Strange). A more traditional Modern team. I didn’t buy Multiple Man for this one. I tried getting the Lord of Vampires out, but he Drax’d him to avoid having to deal with that nastiness. However, that left Wolverine and Colossus open to do a fastball special. I relied heavily on the Cuckoos for removal, forcing him to make tough choices on what to do with his control pieces. As a result, Wolverine did a lot of damage (my opponent was not blocking him to avoid losing his control). After thinning out my opponent’s field with the Cuckoos, Colossus and Wolverine obliterated whatever life points he had left. I won.

Due to there being no possible match-ups, we could not do a round 4 tonight.

-Let me get that out of the way: Multiple Man and Wolverine feel like peanut butter and jelly. Multiple Man’s fielding costs were always his Achilles’ Heel, and when you don’t have to deal with it, he’s far more fun to use.

-I’m kind of sad that Wolverine, Lord of Vampires never came out to play at a relevant time. I bought him twice (games 2 and 3), and either he didn’t field, or my opponent remembered me using him before and Drax’d him to avoid dealing with it again.

-That Flying Car was always a hidden gem for me. When you field enough characters, your little characters can get pretty huge. I had a 10A Multiple Man at one point (last turn of Game 1). With a BAC to give him Overcrush. It gets a bit busted.

-Those Xavier’s School promos are so darn fun. Not only are the stats great for the cost, but both sides of each card are genuinely worth playing.

So overall, for the second week, that was, again, quite a fun format. We’re doing it again for a third (and probably last) time next week before going back to regular formats. Where will I go with this? Stay tuned next Thursday to find out.

One Reply to “WHYP – Seeing Multiple”