What if Dice Masters Actually gave us enough characters to build a team with for each new Affiliation?

In the past year, with seeing events online where you assembled a team from only one affiliation, I decided to do a fun little project.  I wanted to complete affiliations that do not have at least 8-10 cards.

As many of you have probably seen with my posts, since the Card Builder has been inoperable on the Dice Coalition Page, I have been able to create a new comic book-like alternate card format. This project also allowed me to recreate some alt-art cards and most of the card abilities I have recycled existing cards from Golden.  I tried to adjust older cards that never really got to shine, or create new cards that fit in thematically.  I have play tested the affiliations and I think the game play will be fun for you to print out these and play.  Also for each of the team packs, I have selected 3-5 Basic Action cards. Most are reprints and some I have just renamed an existing ability to make it more thematic.

The list of cards below in this team pack are a theme I wished that Wizkids did with the TOA set.  We were given a character set in TOA naming 2 cards as Pirates.    Lots of us wished there were more swashbucklers to play with, and I decided to give us a thematic build.

So I present to you, The Pirates custom Team pack:
(13 cards, 11 different characters cards (13 in total) and 2 Basic Action cards)
(My team pack would also come with 8 Black Pirate sidekick dice…)

So who did you bring to the Team?

The only True Pirates we have up to this point were Captain Laskilar, and Captain Elok Jaharwon that came in TOA.  Three other cards contain the word Pirate in the card name, and similar to Dragons that mean they count as Pirates.  These were Calliope, Yondu, and Nebula.  All of these didnt have any benefits to the cause, so I decided to make my own.

Cards that are already in Dice Masters that I added to the team were: Captain Laskilar, Captain Elok Jaharwon, and Jarlaxle (They said he’s a swashbuckler, and thats a damn Pirate…)

THE MYSTERIOUS SECRET SOCIETY OF PIRATES

CAPTAIN LASKILAR, and CAPTAIN ELOK JAHARWON
The two pirates we originally got excited about, and then seemed to be buried on a deserted island waiting to be rotated out of our lives.  For this team pack, I am just leaving the version that makes these guys get huge with other Pirates.  When I played these 2, it isnt too hard to get them into the field and with using Super Rare Mimic we had a third Pirate.  Adding +6 to these made them huge, and teamed up with Madame Web they would easily do a OTK. 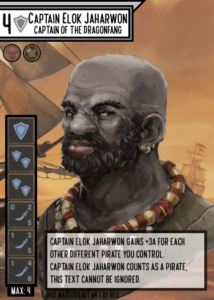 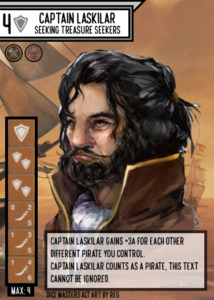 Dice Proxy from – (TOA) Themselves
Ability Inspired By – Themselves

CAPTAIN AL SARYAK – NEW
Did you know that the Pirates in TOA had a third captain?  Yes, its True, Captain of the Emerald Eye that the other 2 captains were associated with never made it to the Set.  He is missing an eye, and the Die that was calling out to me was Bishops.  I gave him the same text as the other pirates to buff each other while they captain the team together. 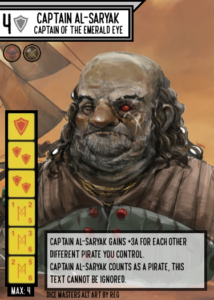 JARLAXLE
Nothing Special here, but renaming the card that should be a Pirate as a Pirate. 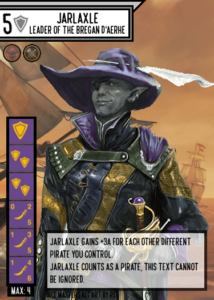 Dice Proxy from – Himself
Card Ability Inspired By – TOA Pirates

JAXPARRO – NEW
What Pirate team doesn’t want a Parrot?  A simple add to the team, but a fun ability added.
Note that this is not a character but an Action Die
Will discount the cost of other Pirates but most are already a 4 cost, but a turn 1 purchase of a Pirate might make things interesting… 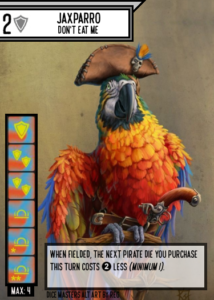 JEZGAR SKENTZIN – NEW
If you wanted anotehr win con, Jezgar and Negruda are your options.  They are a tag team with the other Non-Captain Pirates.  I consider them like the Warriors 3, and they like to be known as the “Pirates 3”. 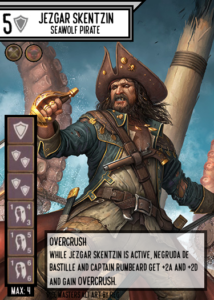 LUFFY
Just like the Parrot, every good Pirate Ship has a Monkey,  Luffy is this Team Packs version and Luffy is loyal and willing to Intimidate out something when needed… 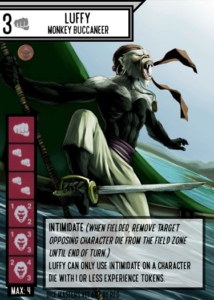 MAD KALITA
Straight reprints of Madame Web.  Its the win-con for the Captain Pirates.  Get them out and you will win. 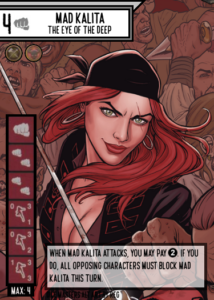 NEGRUDA DE BASTILLE – NEW
Second part to the Pirates Three.  Will give Deadly to the others that join. 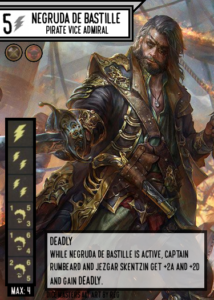 VENGAUL BLOODSAIL – NEW
The Old Pirate at the back of the ship that washed the plank daily… Nobody knew that he’s the toughest damn Pirate of them all, and knows the Skills of everyone he faces…  But can it do it alone? 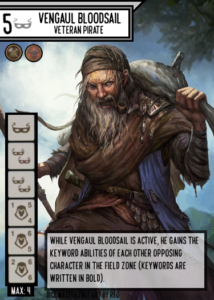 VURGROM REDBEARD- NEW
Last part to the Pirates Three.  Will give Intimidate to the others that join.  Looking for his lost Monkey on the ship… 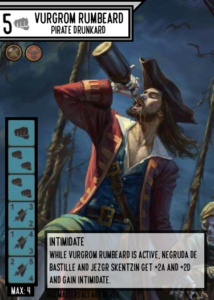 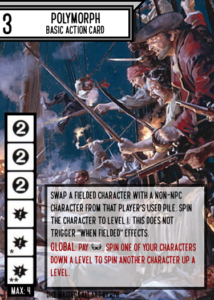 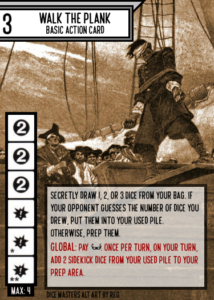 Two simple BAC reprints.  I felt Polymorph will make this build fun and frustrating…  Walk The Plank is just Walk With Elias named…

Post-Mortem:
The Idea for this team pack already was given by Wizkids.  With a third pirate to the Captains, they would have been stronger, and we all know that the Warriors Three can be a thing.  Wasnt hard to make this team pack as it was just renaming and adding one pirate..

Hopefully there is positive feedback to this set, and I can make up some more of these type of articles with proxy cards for people to print and play.

I know these images are posted on this page, (I personally just use them as Card Sleeve images), but I’m sure there is a way you probably can just right-click and save them if you wanted to print them yourself.   If you do, I hope you have some fun to see how well the Pirates can do for you!

Thanks for reading…
Reg