What if Dice Masters Actually gave us enough characters to build a team with for each new Affiliation? 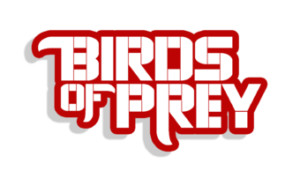 With each new Dice Masters set that gets released, new affiliations get introduced.  While we are happy to see new affiliations enter the thematic universe with recent additions such as The Hand, and Infinity Watch in Avengers, and The New Day, and the New World Order from the WWE sets, I for one, have been frustrated that they sometimes forget about previous affiliations giving us 2-4 and then seem to forget about them. (As they probably will with NWO!!)

In the past year, with seeing events online where you assembled a team from only one affiliation, I decided to do a fun little project.  I wanted to complete affiliations that do not have at least 8-10 cards.

Contiuning in a previous theme I have already posted in the Suicide Squad.  These are cards that I orginally created when the Harley Quinn movie came out.   After a couple community members requested interest in the Birds of Prey, I decided to complete this affiliation.  While most of my builds are thematic, these cards mainly just bring back favorites from previous cards we all enjoyed to play..

So I present to you, The Birds of Prey custom Team pack:
(22 cards, 11 different characters cards)

So who did you bring to the Team?

With this affiliation there actually was none to start with.  It was more a project I was trying to do with the Movie that was coming out.  (Please note that I have a New Mutants Team Pack in the works for when that movie drops…)
For the Birds of Prey, the Movie only had 5 main characters, so I had to reach into the comic for the remaining spots.  I even added a couple villians as you know The Joker was going to show up to help or Harm Harley…

Cards that are already in Dice Masters that I added to the team were: Harley Quinn, The Joker, Black Canary, Huntress, Big Barda, and Harley’s Hyena.

THE BIRDS OF PREY TEAM

BLACK CANARY
One of the Main characters to the Affiliation is Black Canary.  She is a regular to the Dice Masters, But I used 2 thematic abilities for her from previous cards.  Bascially a Breath Weapon to help with a final damage swing, and a favorite brining back the STUN ability… 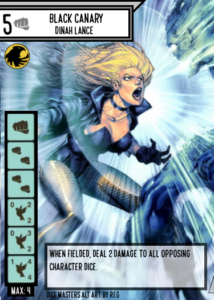 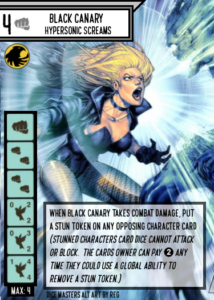 BIG BARDA
While not in the movie, she has been a part of the Birds of Prey.  She was also know to have joined the Brooklyn Bruisers which was Harley’s Roller Derby team.  I brought her ability from the Batman set to be a Blocker, and a new ability based on Destroyer from Thor. 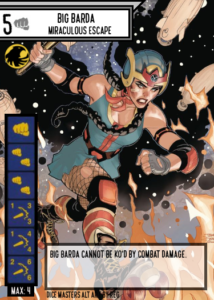 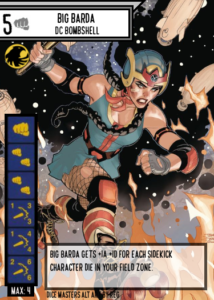 BLACK MASK – NEW
The First Villian to make this team pack and was the main villian in the movie.  Black Mask on both Versions have the Range ability that was a thing in the Warhammer set, but makes sense for any character that carries a gun.  The Global helps with other cards in the Team pack to get stuff to Level 1. 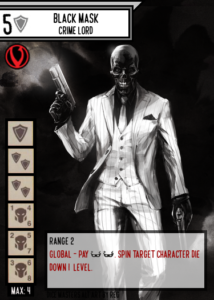 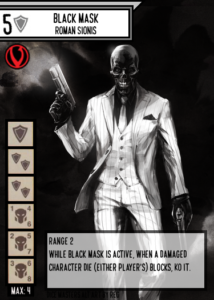 BROOKLYN BRAWLERS – NEW
Needing some quick cheap blockers for the team pack, I was able to just add her friends from Harley’s Local Roller derby team.  Arnim Zola is a blocker that can stay alive, and why not have the other card Create a Token at the start of the turn? 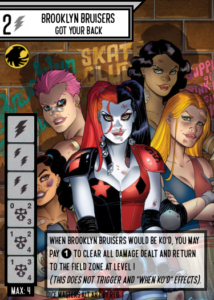 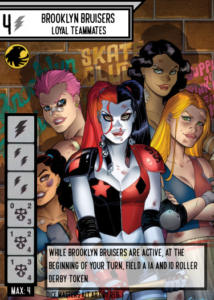 CASSANDRA CAIN – NEW
I know in the movie, Cassandra Cain was a kid that stole stuff and in the comics would eventually become Batgirl… I decided to use the Catwoman Die, and give abilities for both the movie and the comic versions of the character.  The Return of Elf Thief will be great to play to steal an energy, or the other version puts all energy to their used pile… 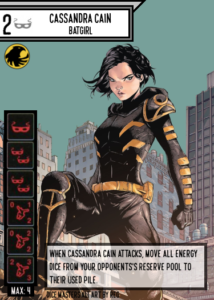 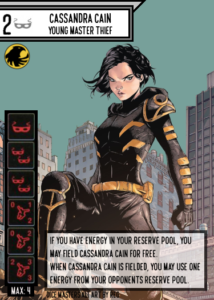 HARLEY QUINN
Straight reprints for Harley, The Tough Cookie will win you a game with her in the field, and the other allows The Joker to play nice on the team. 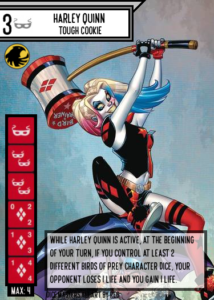 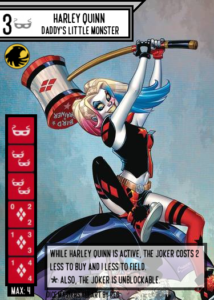 HARLEY’S HYENAS
While the Hyenas made an appearance in a team pack before, its in this team pack that they would actually get used.  The Hyena’s mark the return of a Cold Gun Ability that would have a huge amount of Meta use if it was in the game today…. 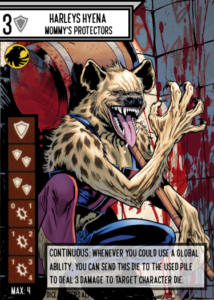 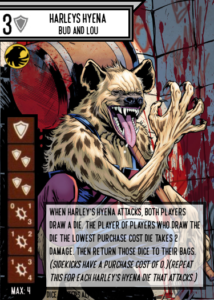 HUNTRESS
Previous Versions of Huntress never messed around with her.  She always had solid abilities and I wasnt going to change a thing. (Well, I gave a Hawkeye Global to a great card already) 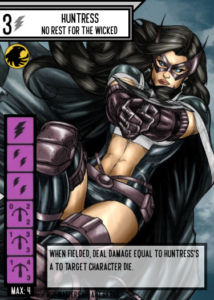 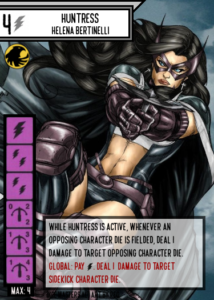 RENEE MONTOYA – NEW
Renee Montoya I had no idea turned into a version of the Question….  Anyways she wasnt the most solid cop in the movie, and always seeming to get in the way, but she is a leader so why not bring back HUSH Ramp..  Alone she is a defender but a ramping machine with others.  The other ability took an ability from Felicity Smoak to be a support piece to reroll an extra time. 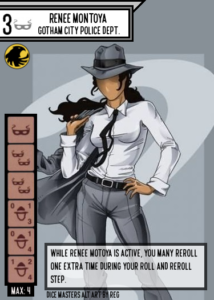 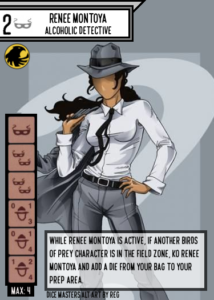 THE JOKER
This Art is my favorite of the whole team pack.  I like the Jack Nicholson version the best… Joker returns to help Harley in this team pack, but not a member of the Birds of Prey.  Joker has lots of previous abilities so a couple are snuck in here. 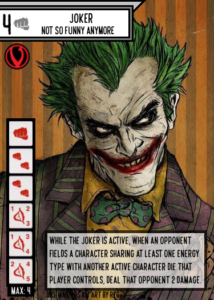 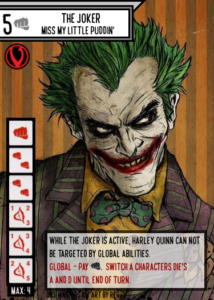 VICTOR ZSASZ
Another Main Villian from the movie, and I think the 2 abilities for him are perfect for this team pack.  Infiltrate and Fast are billiant together, and put a when blocked makes it just amazing… 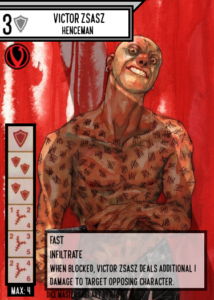 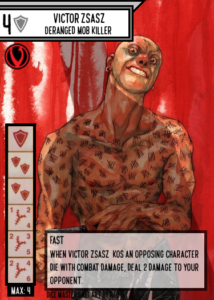 Post-Mortem:
I had a lot of fun creating this team pack.  Always good to bring in a few new characters and especially when the art is solid.  Thematic yes, but is it a solid winning team compared to others?, No.  However seeing all the old abilities return in one Team pack will be fun to print and revisit…

I know these images are posted on this page, (I personally just use them as Card Sleeve images), but I’m sure there is a way you probably can just right-click and save them if you wanted to print them yourself.   If you do, I hope you have some fun to see how well the Birds Of Prey can do for you!

Thanks for reading…
Reg

2 Replies to “What If Missing Affiliations Series – Birds Of Prey”