Wait… Why are you doing a wrap up of the Weekly Dice Arena?  Are things so dire with the apocalypse?  Well… no.  This particular WDA was a bit of a collaboration.  If you are not aware, The Weekly Dice Arena runs an online stream every Tuesday.  They run a wide variety of Dice Masters Formats.  While searching for this week’s Format, I volunteered a TOTM that I have been sitting on since February 2019.  We were going to call it “The Gods Must Be Crazy”, but it goes by Chaos Format, just plain Chaos…  The title doesn’t really matter.  Just realize this is a crazy format.

I decided to dust off the old TOTM article and give you some insight into how this Format works.  I’ll obviously be cutting out the parts that didn’t make it into the WDA (yes… this was originally intended to be even more chaotic than it was).

This was a format run at a local store, and I unfortunately missed out on the original run.  One of our local players (thank you Jason) decided to resurrect this format and he ran it live a while ago.  You can read about my experiences with that here.  It was incredibly fun to play live, so I wanted to try and translate it the best that I could to the online world.  So, with that in mind, let me present to you… 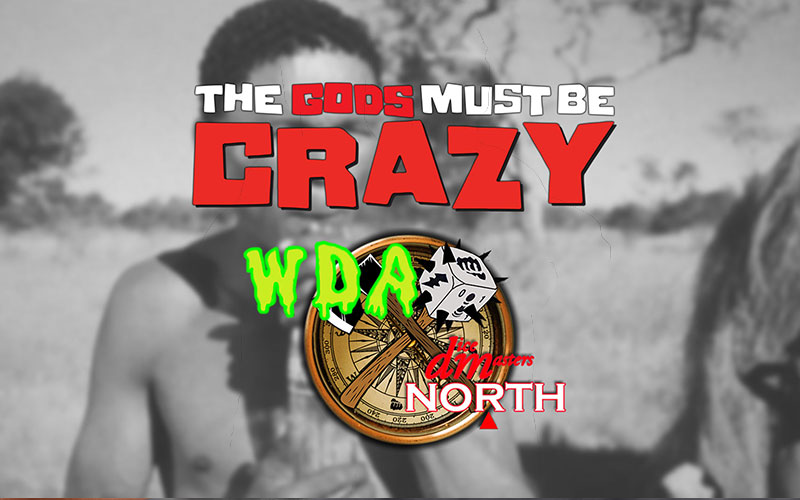 What does this mean?

Here’s to short version:  Starting after 5 minutes, a new “meta” rule will be in effect for all players.  Every 5 minutes after that, a new rule will take its place.  A D20 will be rolled (the gods roll) to determine what rule the gods have determined will be active.

These rules will change the game for everyone during that time period.  Some are good.  Some are terrible.  Unless otherwise stated, these rules will reset when a new one becomes active.  The currently active meta rule will remain active at the start of the next game.  I had to make some modifications for Jason’s original list to make them a little more internet friendly.

** Note that the WDA activated things a little differently, but this was the original intention. **

The following are the current pool of possible meta rules that the gods may choose from:

A little something extra…

We never got to this, but if people wanted to give the Format another go it can get a lot more interesting.  😉

Each meta rule/gift of the gods will only occur once until each one has been exhausted.  If a number comes up a second time, before all numbers have been exhausted, the next highest available number will activate.  (I forgot about this rule during the WDA… it would have saved some time).

The WDA went with a “new” modern build.

With regards to intentional slow play to “reset the clock”, or wait it out for the next gods roll… please don’t.  Don’t be afraid to institute the CR Gameroom “Don’t slow play me brah” if needed.  The whole point of this is to be a little on the chaotic side of things.

Things you will need for these games, as there are certain effects that may refer to these:

If you did not get a chance to see the stream live, Ross normally uploads it to YouTube.  I will update the article with the video link once it is available.  In the meantime, check out the video on Twitch here.

This was a blast to watch.  Seeing a rule change at the most inopportune time for a player was both joyous and heartbreaking.  It is hard to prepare yourself for this type of  Format as the rules are ever changing.  Unless you have a Team that is fast enough to win quickly, you will get hit with one of these chaotic rules.

As an observer, it is not the easiest Format to run online.  I definitely see ways that this can be improved for a future run.  Overall it was fun to watch though.  Thanks to Ross for letting us participate in this week’s WDA.

Did you participate in the WDA last night?  What did you think of the Format?  What improvements do you see that could make this type of an event better for the online environment?  How do you feel about cucumbers?  Let us know in the comments below.