Format – Modern Alphabet Soup
Additional info: This is a modern age event. Green Light Fiasco! All character/action cards/BASIC ACTIONS on your team must start with 10 consecutive letters of the alphabet. Skip letter Q and can loop (eg. XYZABC) 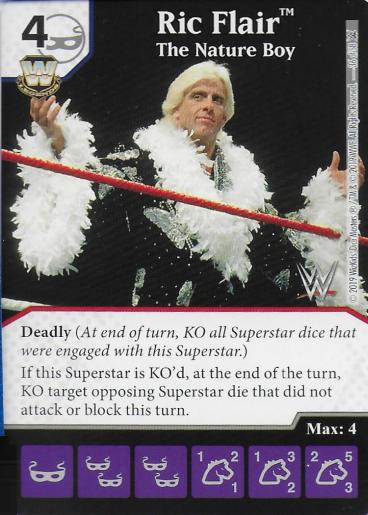 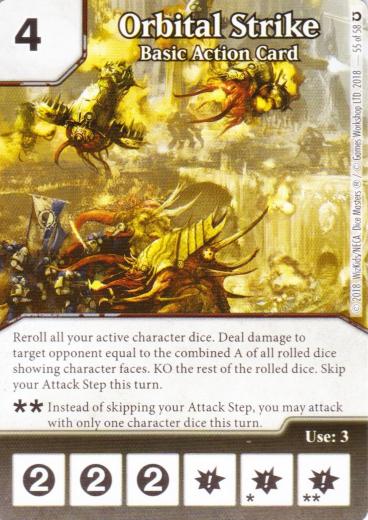 This week, I knew I wanted to use Orbital Strike. Now to figure out the letters to use. We start with …

Nihiloor: Plotting main use was for the global, “Pay ‘mask’. Once per turn, you may KO a character die you control.” as I was thinking for the letter T, I would be using Thunderbird: Buffalo Soldier.

Orbital Strike BAC was the main card and all the other letters, I would be using cards with low cost, high attack value.

Primaris Aggressor: Boltstorm Gauntlets was for the global, “Pay ‘fist”fist’. Once per turn, all character dice get +1A (until end of turn).” to buff all my characters before I roll Orbital Strike.

Ric Flair: The Nature Boy intrigued me. He has Deadly and if KO’ed I can KO an opposing character die at the end of turn. This could happen if he doesn’t roll back from Orbital or if I hold a mask, use Nihiloor global to KO him and KO a character on my opponents turn. I decided to make Ric and Orbital my main focus/combo. He sounds like a fun card.

Thor: Scion of All Asgard only has a global on the card, “Pay ‘bolt’. Once per turn, the next action die you purchase this turn costs 2 less (minimum 1).”. Decided on Thor instead of Thunderbird because OS will be cheaper. Plus, If I decide to buy Thor, he’s got good stats for OS, 5/6/7 (fielding 1/1/2).

Undertaker: Managed by Paul Bearer was the only letter I can use. I have no intentions to buy him. Under Surveillance was my other choice but my other BAC is going to be a prep.

Villainous Pact BAC, for the global to prep, “Pay ‘mask’. Once per turn, on your turn, if you have no dice in your Prep Area, you may Prep a die from your bag.”

Wolverine: Adamantium Fury, added just cause his stats were great, 5/6/8 but his fielding cost would hurt, 1/2/3. He’s a five cost, if I rolled a 5, I would probably buy Thor over Wolverine. Also, his ability is horrible and no help. You can go check it out if you really want to 😛

Xavier Woods: Time for Francesca! has tag out (“After blockers are declared, you may Prep this die from the Field Zone to give target Superstar die +2A and +2D until end of turn.”) which you can’t use with OS (unless you rolled double bursts). But I choose this card for his second part of his ability, “While Xavier Woods is active, you may reroll action dice one extra time during Roll and Reroll Step.”. If I miss roll OS twice, I can re-roll.

My plan is to buy Xavier, Ric Flair and Orbital and go for it. If I can, would buy Thor for extra stats. Use Villainous Pact for prep, Primaris and Nihiloor for the global.

Jay bought an Attune (While this character is active, when you use an action die, deal 1 damage to target player or character die.) team. He had four attune characters, Volo, Wasp which gets buffed +1A/+1D when you use Attune, Zatanna and Doctor Strange. The Doctor Strange would let you re roll your action die and prep them if they rolled action face (which Jay realized during the game, it will happens when you field Doctor Strange. He thought it was a while active). I bought Shawn, Xavier, Thor and Orbital Strike in this game and had some bad luck rolling. Jay was able to buy Volo, Doctor Strange, Xanather, Clayface and even he bought my own Orbital Strike! He was using Big Entrance and Yellow Lantern Ring: Used for Great Good to lower the costs. He was able to gain the victory by having more characters in the field and attacking.

Oh ya …. I didn’t bye Ric Flair as intended to with Orbital Strike. This was the whole plan. I will for my next games as I really wanted to see how Ric works with OS.

Dan had a neat team. He bought Lord of Contagion: Plaguereaper, “While Lord of Contagion is active, when a Sidekick character die is KO’d, all other character dice get +1A and +1D (both players’)(until end of turn).” and Manshoon: Clone Wizard, ” While Manshoon is active, when you use a Basic Action die, deal 1 damage to all opposing character dice….”. He would buy and use Instant War BAC to “Each player draws 3 dice and fields all Sidekick dice drawn this way.” and when he used it, Manshoon would trigger, KO’ing my sidekicks and then all his characters would get buffed and at the right time, attack for a whole bunch of damage. My team is perfect for his team as if I don’t roll back my characters for OS and have no blockers, he can win very fast. He was getting lucky too as every time I pulled from my bag with Instant War, I had sidekicks to field. This time around I bought Ric Flair, Xavier and Orbital Strike and it was working as I was able to do damage with OS. Ric Flair missed once and I KO’ed his Manshoon. I also used Primaris global to buff and I had his life down to 1 but I didn’t have much characters in the field. On his turn, he got the right pull giving his characters +4A and walking all over me for 43 damage!

Orbital Strike always a fun one and I love this card so much because not only is it super cool but I get to experiment with other cards that would work well with OS, like Ric Flair.