Format: Rares, SR, and Promos!
Additional Info: GOLDEN AGE. Green light casual goofy nonsense. All cards including BAC must be rares, SR, or promos (as specified by the team builder)

The Team:  The Vampire Lord Dude 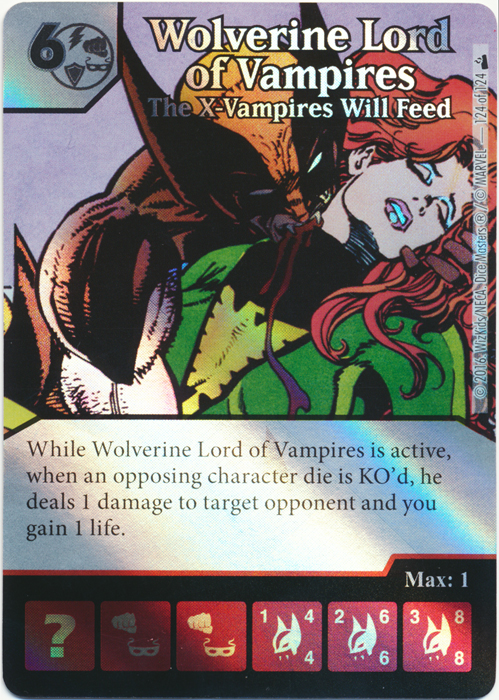 I couldn’t remember majority of the rares, SRs and promos in golden, so I did the scrolling through the list and decided to centre the team around a fun card that I haven’t played in a long time, Wolverine Lord of Vampires which is a what if character. I would need to pair him with characters/actions that would KO my opponents characters in the field. I found a few cards to accomplish this.

Batgirl: Babs, when she is damaged, she will deal 4 damage to target opposing characters divided any way I choose. To damage Babs, if purchased, I can attack with her which will put the opponent in a position of blocking her which would damage her during the combat to trigger her ability or they will let her through 3/4 damage to their life OR I can use Power Bolt BAC that deals 2 damage to target character or player to damage her.

Hawkeye: Avengers Disassembled, in your main step, you can KO Hawkeye to deal damage equal to his attack divided any way I choose to opposing characters.

I put Ring of Winter on the team for the global, “Pay ‘bolt’. Once per turn, the next die you purchase with purchase cost 6 or more costs 2 less.” to help lower Wolverine cost to four and hopefully have two energy left, the bolt to do the global and a mask to prep. To prep, I put on Professor X: Trainer for the global, “Pay ‘mask’. Move up to 2 Sidekick dice from your used pile to your prep area.”. The goal would be to hold a mask turn one and purchase a 2 or 3 cost die (depending if I go first or second), then Professor X global on my opponents turn, and should have six dice on my turn to purchase Wolverine fully turn 2 or if I get the right energy rolled, purchase Wolverine for four with Ring global and have a mask to prep again.

And lastly, the last BAC on the team was Takedown, “Deal 2 damage to a non-‘shield’ character. If it is a Villain, deal 4 damage instead.” Some extra damage to deal to surviving dice and if needed, to do more then 2 damage, this card also has a global, “Pay ‘mask’. Target character is gains the Villain affiliation until the end of the turn”. Make the character a villain using the global and deal 4 damage.

Not sure what Mike had for his win con but he had cards to stop my Lord Dude. Billy Club: Tool of Justice, reroll character and Black Widow: Widow’s Hunt, spin down 1 level and if on level 1, spin to an energy face, which both cards would definitely hurt me. Also, Groot: We Are Groot, when active, all your other fielded characters get +3D and he can gain life with Constantine: Trinity War. Mike bought Billy Club and Widows. I was able to buy Wolverine turn 2 and just went with Nightwing all the way. Mike should have rubbed Billy Club with garlic as I kept rolling Wolverine back!  I was able to KO his characters as they had low defense and chip away for the win. He had brought Groot but he never rolled. I got lucky in this game.

Mike bought an overcrushing Kitty Pryde team. Kitty Pryde: On a Mission, “You may spin down a friendly character with the X-Men affiliation to give Kitty Pryde +2A and +2D until the end of your turn” paired with Colossus: Xavier’s School that “When fielded, target ‘x-men’ character die other than Colossus gains Overcrush.”. He also had spin up/down cards to help. This game fell apart for me. It worked out again as I was able to buy Wolverine turn 2 but didn’t roll twice when pulled. This put me behind but Mike was missing his rolls and with all his energy he also had the same Wolverine which he bought and used Mimic: Calvin Rankin to copy abilities and printed A and D of target character die. Double Vampire! Mike was able to KO my characters. I was pushing Nightwing but Mike’s characters were beefy enough to KO Nightwing, I would lose life x2. Missing Wolverine put me behind but I had no way to stop Mike, unless I went with Hawkeye, Babs with Power Bolt and Takedown instead.

Jay had an infiltrate team using Angela: Asgardian of the Galaxy that gives your character dice infiltrate. He had Black Manta: Artificial Gills, “Black Manta gets +1A and +1D for each other active Villain.” and used Danger Room: Flame-Throwers and Rotating Knives to give all characters the villain affiliations buffing Manta. Again, everything worked out and was able to but Wolverine turn 2 and he didn’t roll!, again. Jay’s team was to fast and he was able to pull off the win.

Vampire Wolverine is always a fun card to play (when he rolls). I always enjoy playing with Nightwing as well. It was my first time playing Nova Corp, Takedown and Poison Dart and I really enjoyed Nova Corp. I would play them again.

What cards would you use to KO characters? or have any other thoughts, would love to hear it!