Format – Modern Constructed – Flexible Bans
Additional info: Modern, Red light event. Bring your spiciest, juiciest build! The caveat for this format is that at the beginning of each game each player chooses 3 cards from the opponents team that will be completely removed for the remainder of that game. Players may select BACs that the opponent brought, if they so choose. 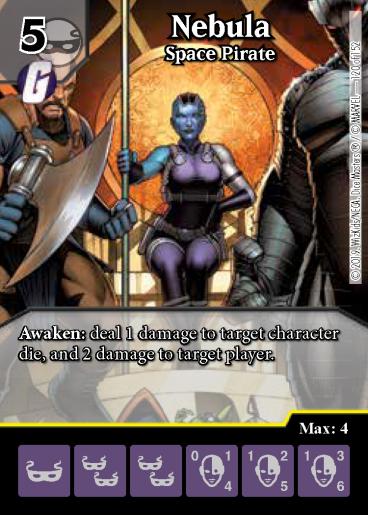 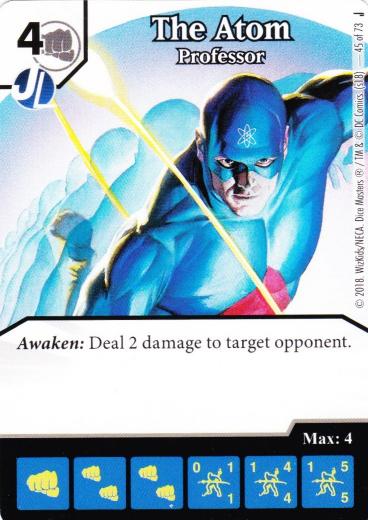 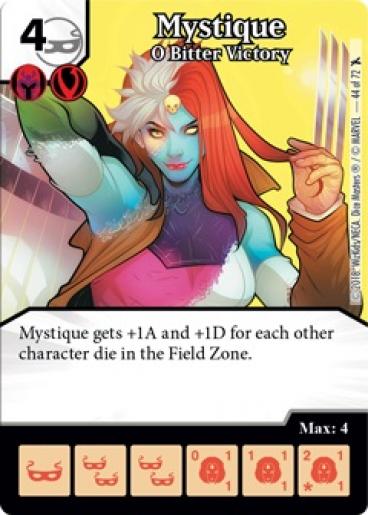 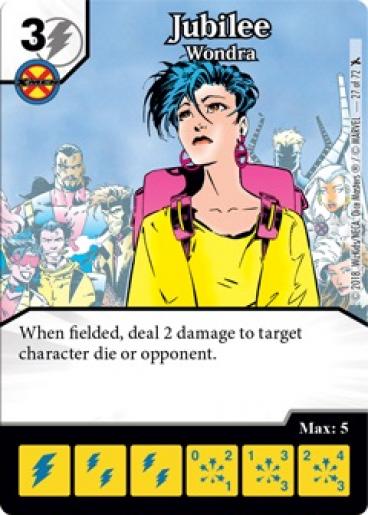 Considering the theme and your opponent getting to turn over 3 of your cards, I just went with a fill of win cons that wont really rely on to many cards to make work. I really enjoyed playing the Awaken The Atom and Nebula combo that I did in a past WDA, I put them on to give it another go. Awaken is when you spin up a character die up a level you can use their Awaken ability. The Awaken will need a spin up and spin down mechanic, I put a double duty of those on the team. Energy Field BAC, allows you to pay a mask to spin on of your active character down a level then spin a character die up a level. I also put Zatanna that has the global to spin character up one level for a fist energy and Under Surveillance BAC to spin down a character down one level with double mask energy which I dont really like as its two energy but its the only spin down global in modern. Since I have Under Surveillance on the team, I will pair that with Mystique. If she gets big enough I can do some unblockable damage. If they take that BAC away and do end up purchasing her, the goal would be to attack with her to try and take out my opponents characters if she has decent stats. To thin out the bag and have more characters in the field to help Mystique, I put The Collector on for the global, pay a mask and you can field a sidekick from the used pile. If my Awaken team gets shut down (card turned over), I went with Jubilee that when fielded she will do two damage to a die or opponent life. I didn’t put an KO global (Nihiloor) if she gets stuck in the field, we will just attack attack attack and hopefully she will sneak through, or I spin her down to get her KO’ed, if the global is available. Lastly for prep, I put on Xanathar that has the global to pay generic energy to prep a sidekick die.
I don’t think this will work out as it’s not really red and the only control piece I have on the team was Black Widow Agent. With all the Black Widow talks (always pay attention to card text people!), I put her just in case and she can get turned over depending on the opponents team, but I am here to have fun!

Jay had some audio issues and we had no game. Tie

EPICat banned my Energy Field BAC, Jubilee and Mystique. He had God Catcher: Famous Walking, Becky Lynch: Maiden Ireland, Thor: Jormungand’s Fear or Hope Summers: Pluripotent Echopraxia (as he had Rachel) to choose from. I banned God Catcher (use action, field 10/10 token), Thor (when active, field a character, deal 2 damage to target character or player) and Hope (She gains the ability of X-Men character when fielded). Dumb me thought it was the 4 cost Becky so let’s say I got slaughtered! I should have banned Becky over Thor as I had Black Widow to help negate the damage and he didn’t ban that. Plus, I bought three Atoms which did some damage the hard way using Under Surveillance BAC global and Zatanna global to do the spins. Should have purchased BW as I forgot she was on the team lol

I got Jay again, re match 🙂 I was suppose to get Mr. Spin but he had to leave. Jay had an obscure (When you use an Action die, this character is unblockable until end of turn.)/Infiltrate (When this character die is unblocked, you may return this die to the Field Zone and it deals your opponent 1 damage.) team. I banned God Catcher: Famous Walking, Angela: Asgardian of the Galaxy (gives all your characters infiltrate) and Thor: Jormungand’s Fear. I knew for sure he would ban my Black Widow, so I had to go Thor. I went all in on Jubilee and bought all 5 dice. I just had to keep attacking with her, using her ability to either KO dice or to Jay’s life as I needed to get her through since I had no KO global. I got lucky as Jay was missing some rolls. If he had his Kuo-toa: Mad Degenerate out early with Black Viper: Notorious Bandit that gives your infiltrate characters an extra infiltrate damage and using his action dice, his dice were unblockable but the main thing is, he could have been doing lots of infiltrate damage as I couldn’t block Kuo-Toa.

That was fun and the format is crazy. I should have put more thought into the team. Most people put God Catcher and Thor on the team as they knew folks would ban it. I would play this theme again for sure.