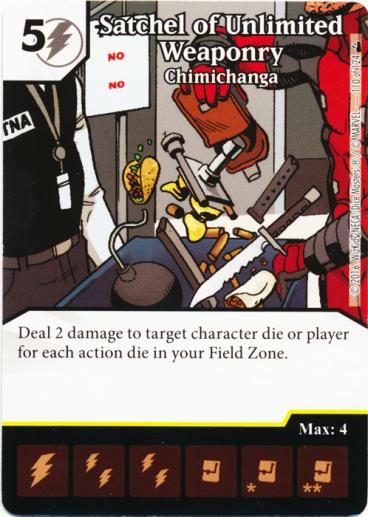 I am back! I have been hosting WDA past few weeks as Ross was taking care of his newborn and I really didn’t play. This week the star card I picked was a no brainer for me as I wanted to play ‘Satchel of Unlimited Weaponry: Chimichanga’ for a while. For Satchel to work, you need to have action cards with the keyword ‘continuous’, “Actions with Continuous are “used” by moving them to the Field Zone. They can stay there past the end of the turn. Usually they’ll either send themselves to the Used Pile for an effect, or allow you to send them whenever you could use a Global Ability. If they are sent to the Used Pile while you are the active player, they go Out of Play first. As with all non-character dice, Continuous dice cannot attack or block.” on the team. I didn’t overwhelm the team with continuous cards and went with low cost cards. I had three continuous action cards on the team, ‘Bat-Signal™: Out of the Darkness’ is a 1 cost shield and ‘Two-Face™’s Coin: 50/50’ is a 2 cost mask. These we all maxed out with dice. The other was a basic action card at a 3 cost just cause I had never used it before, ‘Target Lock’.
I needed to make Satchel cheap and came across two cards, ‘Malekith: 13th Son of a 13th Son’ for the global, “Pay ‘bolt’. Once during your turn, KO target character die you control. If you do, reduce the purchase cost of the next action die you purchase by 2.” or ‘Cosmic Cube: Beyond Imagination’, “Your first Action die purchased this turn costs 1 less (to a minimum of 1). Each other different Action die you purchase this turn costs 3 less (to a minimum of 1).”. I decided to go with Cube as I didn’t want to KO characters as having fielded characters is a must with this team, don’t want to leave the field empty and I can get Satchel for 2. With all these action dice, I went with the lowest cost Attune (“While this character is active, when you use an action die, deal 1 damage to target player or character die.”) character, ‘Volo: Guide Writer’, can hit 1D characters or opponent life and one of my favourite cards to pair with Satchel, ‘Mister Miracle™: Show Must Go On’, “While Mister Miracle is active, your action dice gain Boomerang. (After using this die, roll it. If you roll an ‘burst’ face, add it to your Prep Area.)“. I would hope to be able to Boomerang Satchel. If I had the energy, shield, I would use ‘Rip Hunter™’s Chalkboard’ global “Pay ‘shield’. The first die you purchase this turn is added to your Prep Area instead of your Used Pile.” to bring over Satchel or a character die. For ramp, I added ‘Xanathar: Paranoid Tyrant’ for the global “Pay 1. Once per turn, you may Prep an NPC from your Used Pile.”. Lastly, I had no idea what to put for my last BAC. I went with ‘Reclaim’, maybe it might help to bring over Satchel?? maybe?

Mike brought a Kree Captain/Soldier team that he would buff with Parasite, “While Parasite is active, instead of declaring Parasite as an attacker, your may add his A and D to an attacking character die. You may do this once for each of your Parasite character dice that do not attack.”. I knew he’s going to overwhelm me with high A characters. He also had ‘Billy Club’ that re rolls out characters. I really needed to purchase my characters first and hopefully roll sidekicks to defend. This was a close game and I couldn’t roll sidekicks but Mike did! I started using my Attune damage to take out his sidekicks as he was buffing them with Parasite and attacking. I barely stayed a float but managed to deal the 10 damage I needed to win with Satchel and 4 continuous die in the field and two attune damage.

Mike had an interesting team, using ‘Lord of Contagion: Plaguereaper’, “While Lord of Contagion is active, when a Sidekick character die is KO’d, all other character dice get +1A and +1D (both players’)(until end of turn)” with ‘Seth Rollins: Seth “Freakin” Rollins’, “Crosspulse – Deal 2 damage to all opposing Superstar dice.”, which I actually didn’t notice until he told me “that’s game”. Crosspulse, “Crosspulse is a special version of Impulse found only on Crossover Characters. When you purchase them by only spending their matching type(s) of energy, you get to use their Crosspulse ability.”. He was just building up a field with sidekicks using Instant War BAC which I also field sidekicks. I was getting his life down with Satchel and once he had the damage, he bought Seth and my whole field got wiped and he came in with 40+ damage, crazy.

Jay brought a classic combo, Kree Captain that “gets +1A and +1D for every active ‘villain’ character die”, which also counts my field as well and to ensure I have villain’s, he had ‘Danger Room: Flame-Throwers and Rotating Knives’, all characters lose their affiliation and gains villain affiliation until end of turn. He also had a card that I hardly saw play was ‘Black Canary: Flower Shop Owner’, “When Black Canary attacks, ‘villain’ character dice cannot block (until end of turn).”. I was able to get him down to 10 life but I wasn’t fast enough, once he was setup and rolled his Canary, game over.

Btw, I didn’t notice until this round that I was paying 3 for Satchel instead of 2 with cosmic cube as it discounts by 3, doh!

Satchel team is fun to play but it is a pretty straight forward build. The downside is, it can be a bit slow and you don’t have much fielded characters to defend.