And hopefully, we get some news from Wizkids sooner than later!

The Team:  HELLO, my name is OR-ah-nax 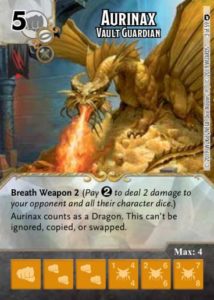 Knowing this was a red event, I wanted to bring a team that I haven’t played in a while but can maybe squeak out a win. No Becky (well, maybe for the global), God Catcher, Thor or Iceman for me. I remembered Aurinax from the MoDPDM event that Nefarious Broadcaster built a team around and I wanted an excuse to play that card. I got my excuse!
Aurinax doesn’t need any supporting cards for his ability to trigger. As long as you have 2 energy in your reserve pool, Breath Weapon (“When a character die with Breath Weapon X attacks, you may pay X energy. Deal X damage to your opponent and all of their character dice. You may use multiple Breath Weapons in a turn, but only one per character”) will trigger. And Aurinax is the only card in modern to have the Breath Weapon Keyword.
For the other 7 slots, I went with control pieces. If anyone does bring any meta teams, I wanted to hopefully be able to slow them down. Side note, the first card I looked up was my favourite card, Black Widow: Agent promo but she wasn’t part of the sets in the format *cries*. Dealing with the 1-2 damage (e.g. Iceman, Thor (SR), Corvus, Dani or Jubilee) would be tough.
Aurinax has a 1 2 3 fielding cost and if I hit the 3rd level, I wouldn’t want to use all my energy for fielding. I put Yawning Portal on the team which fielding cost become free. If I time it correctly and Aurinax would be pulled on my next turn, I would buy Yawning Portal and put it in the prep area using Becky global, “Pay ‘shield’. The first die you purchase this turn is added to your Prep Area instead of your Used Pile.”. Yes, she is on the team, just for the global,  I pinky promise.
Gazer: Evil Familiar has the intimidate keyword which removes an opposing character die from the field zone until end of turn. He’s there to handle the God Catcher token as they are gone from the game if they leave the field zone and Iceman. If I attack with Aurinax with Breath Weapon, I would take 2 damage to life for hitting Iceman, we don’t want that!
Asuka (which I don’t know why I put her on the team as she never helps me) was to help lower the cost of two of my mask characters. Big E: Powerlifter’s Physique which when active “any combat damage to you that is more than 2 is reduced to 2”. This can help with over crush damage and/or I can let damage through if a heavy hitter attacks. Mimic: Flying, Blasting, Slashing which in short form, Mimic and chosen opposing die are re rolled, the opposing die is KO’ed and Mimic possibly becomes a copy of that die if both roll back character faces. Iceman, Thor and Becky come to mind that Mimic can help.
I really didn’t know what to put for my 7th card, I just went with Intellect Devourer for the global, “Pay ‘zero’. Once during your turn you may spin one of your active NPC character dice to an energy face (move it to your Reserve Pool).”. If I need energy for Breath Weapon, this can come in handy.
And lastly, the 2 BACs. I didn’t have any ramp/prep and I thought Walk with Elias would give me more dice in my prep so went with that. Nothing else was jumping out at me for the last BAC and I realized that Aurinax has a gear symbol on the card. What is Gear you ask? “Gear are a special type of Continuous Action Dice that have the Equip keyword. They are “used” by moving them into the Field Zone. When you initially do this, and at the beginning of each turn that this die is active (any player’s turn), you may attach this die to a character with the Equip icon ([GEAR]). You may switch the attachment from one character die to another. If the equipped character die leaves the Field Zone, the Gear die remains in the Field Zone (unattached). As with all non-character dice, Gear dice can’t attack or block.” I put Cloak of Elvenkind that gives the Gear card infiltrate “When a character die with Infiltrate attacks and is not blocked, you may choose to remove that character die from combat (immediately after blockers are declared, before Action dice or Global Abilities may be used).  If you do, that character die deals 1 damage to your opponent, and the die remains in your Field Zone.”.

Dan bought an Iceman team using Turk to do his damage, “Energize – You may deal 1 damage to target character die. While Turk Barret is active, when you spend ‘mask’ energy to use a Global Ability or field a character die, deal 1 damage to target character die.”. He had a couple of mask global to use as well if Turk didn’t energize. I honestly didn’t know what to buy on my turn as it was just a wait and get Aurinax when I had the energy, so I bought Asuka and used her ability to buy Mimic. I was able to line up Yawning Portal and Aurinax. Lucky for me, Dan kept missing his Iceman and the one time he had him in the field, I force attacked him with his own global, taking 5 damage. It was a back and forth game and neither of us had much characters in the field. Aurinax did his job once and went through for 6 damage as his field cleared with Breath Weapon. The turn I could have won, I needed Mimic and his Angela to roll back on faces to get the attack value. But it didn’t work out and in the end, not having a field did it for me and Dan won.

Pink had a really cool team that I never thought of, Promo Typhoid Mary, “Energize – Your ‘sidekick’ character dice and ‘hand affiliation’ character dice get +2A and Overcrush at the beginning of this attack step.” and Spider-Man, “Spider-Man’s card is considered to have the affiliations of all the character cards on your team.”. His dice were rolling great.  I was able to get some Breath Weapon action but I did end up missing rolls on Aurinax 3-4 times! Aurinax was able to stop one overcrushing Spider-Man. Pink had let Aurinax damage through on my turn and had a crazy turn rolling two Mary on energize and his Spider-Man getting beefy. I had only two characters in field at 13 life and he won with Spider-Man 11 overcrush damage, two sidekicks with overcrush, Auska and bolts energy as he had a global for pump, couldn’t stop it.

I had fun playing Aurinax and would do it again. This time utilizing the BAC, Cloak of Elvenkind and equipping it to Aurinax. This would have helped drastically as I could just infiltrate Aurinax and he would stay in the field. If I cleared my opponents field with Breath Weapon, Aurinax is going through for damage and that hurt.

Always a fun night! Thanks for reading.