Format – Limited Single Affiliations – UXM XMF XFC
Additional info: Create a thematic SINGLE AFFILIATION team using only cards/actions/BAC from the following sets: UXM, XFC, XMF (and team packs). Actions can be added to any affiliated team. UNAFFILIATED is also a “team” option. I imagine we will see lots of Xmen teams, but the villians are pretty gross too.
BAN LIST: 3 cost Hope Summers 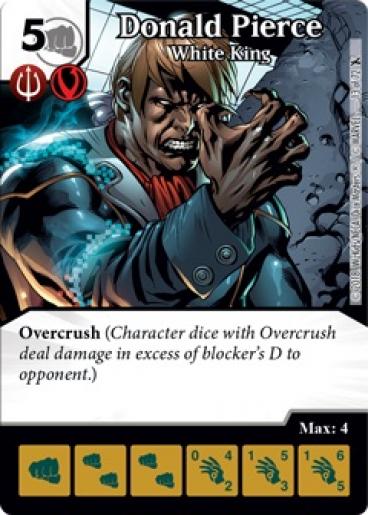 Single affiliation themes are always so much fun. I knew I didn’t want to do an X-Men or pure Villains team.  I decided to run a Hellfire Club team of all characters, no action cards. The team is centred around ‘Donald Pierce: White King’ that has overcrush. There isn’t much Hellfire affiliated characters as I am looking what can help pump up Donald’s attack. ‘Magneto: Grey King’ was a great choice as he pumps all my Hellfire Club characters by +2A/+2D while he is active and he has great stats for defending. One of my favourite keyword is ‘Energy Drain’, “After blockers are assigned, spin each character engaged with a character die with Energy Drain down one level. Character dice at level 1 can’t be spun down.” and luckily ‘Madelyne Pryor: Sinister Origin’ has this keyword but the best part, she gives all the Hellfire Club characters ‘Energy Drain’ as well, bonus!. This should help with Donald and his overcrushing as blocking characters are spun down, hoping for small defence. I wanted to make it a bit hard (or annoy) for my opponent to field characters, I put ‘Sage: Psionic Firewall’ which “your opponent’s non-Sidekick character dice cost ‘1’ more to field.” (I made a mistake, look at post-mortem for why). There was only one ‘Black Tom Cassidy’ with the affiliation and he has ‘Attune’ which is not to bad if I purchase my basic action cards. ‘Counterstrike’, “Choose an affiliation. Prep one die of that affiliation from your Used Pile. Move all other dice of that affiliation from your Used Pile to your bag.” and had the global to help prep dice, “Pay ‘1’. Once during your turn, Prep a Sidekick die from your Used Pile.”. The other BAC was ‘Enrage’, “Choose a character. That character must attack at its next opportunity. Spin that character up one level (if able).” which would be good with Donald if he’s on a lower level and has the global to help pump attack by +1A with a bolt. Sunspot, Sebastian Shaw and Mystique were there for fillers, though it would be interesting to use Mystique on a non-villain team as she gets their printed A/D but at 6 cost, might not be a purchase.

Firebreak brought a Villains team (using IG as that is what he owns). He was growing his field with sidekicks and Kang which had swarm but also using Kang to attack with as I didn’t realize Kang had some beefy stats, 4/5/5 attack. That is damage I didn’t want to take and of course I couldn’t roll sidekicks for blockers. He had Villainous Pact global to help with prepping. I did have time to buy the characters I needed, Madelyne, Donald and Magneto. Magneto was giving me some grief as he didn’t want to roll. I was able to get some overcrush damage through with Donald but I had to defend with my characters which got KO’ed with no Magneto. I was able to KO his Kang but it kept rolling back!!. It was a good back and forth game with the game ending in a TIE.

EpiCAT brought a Brotherhood team. Brotherhood characters has a lot of buffing each other which will help as he had two overcrush characters, Sabertooth and Lady Deathstrike. He had bought ‘Black Tom Cassidy: Plans in Motion’ which has “Fast (Characters with Fast deal combat damage before characters without Fast.) Call Out (When this character die attacks, target character die is the only character die that may block this character die.)”. I had Sage and Madelyne out and was blocking with them as Tom’s stats are also high 3/4/5. I think I did take Tom’s damage as ‘Energy Drain’ did help. It was also hard to get Donald overcrush damage through with the Fast as my Donald wasn’t beefy and was getting KO’ed, yes, Magneto was giving trouble rolling again. Both EpiCAT and I didnt know that Fast also happens on the opponents turn as well which made it tougher. Fast happens during combat damage and doesnt say on your turn.  This was a good back and forth game. I got Epi down to 4 life and I was at 7 (I believe) but he couldn’t get any damage through. Once Magneto rolled, he helped with his stats for blocking.

Armada brought a X-Men team and when I saw the team, my first reaction was “This game will last 5 minutes :)” and Armada said “No, maybe 7 minutes” LOL. I wont spoil to much as it’s worth a watch for this game. I was overwhelmed with Dani, block and reroll, Boom Boom, 2 damage when you use a basic action die and Jubilee that deals 1 damage when you field a sidekick. It wasn’t until half way I realized, he was going to use Angel that gives +1A/+1D to sidekicks when he attacks, which actually I missed when the first swing of 7 sidekicks attacked for the buff but Angel didnt attack. Probably would have made a difference as I might have taken Angel damage to get him out of the field. After that attack and taking 8 damage, I knew I needed a field to block. It turned out to be a fun, super close game and went almost to time.

Hellfire Club is fun to play and would play them again but with some more discounts, buffs and ramp/prep. All the games were very close which made it super fun.