Format – Canadian and USA Holidays!
Additional info: This is a modern age event. All dice must have the purchase cost of 1, 4, or 7 EXCLUDING BACs. These are to celebrate the 7/1 and 7/4 holidays this week in Canada and America! The caveat here is that you must have AT LEAST four 7 costs on your team. That way you can create a few pairs of 7/1 or 7/4

The Team:  An Unlikely Trio, Eh! 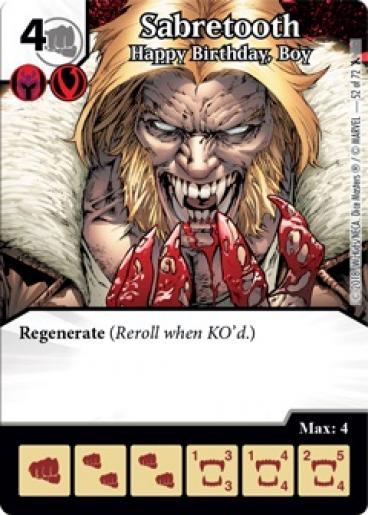 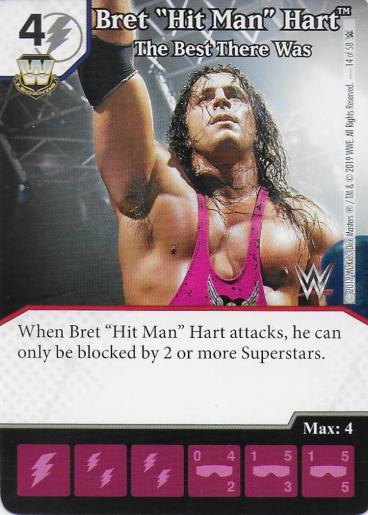 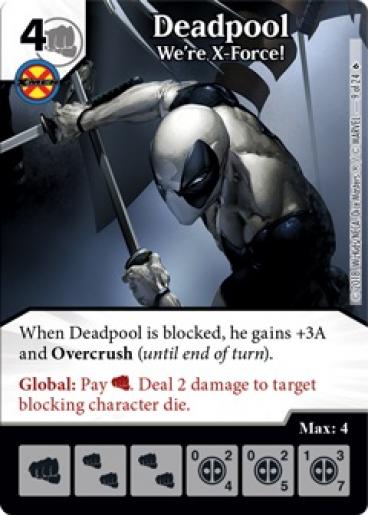 How in the world am I going to make this a 7/1 team (as I want to keep true to Canada) when there are only 2 cards at the cost of 1, Slygar and Poxwalker which neither would help in any way. I would have to stick with four cost characters, so, let’s make the main characters I am going to use, Canadian born!. My main focus would be on Deadpool. Since his stats are better on his defence side, I needed a A/D flip global, enter 7 cost #1, Bizarro, “Pay ‘shield’. Switch a character die’s A and D until end of turn.”. I would want my opponent to block Deadpool as that is when he gains his +3A and Overcrush. I added the Basic Action Card, Booker T, Ringside Announcer for the global, “Pay ‘shield’. Target Superstar must block this turn if able”. Deadpool has a handy global as well. If I wont be getting much Overcrush damage through, I can use his global to deal 2 damage to that characters defence value. Once my opponents get to their 7 costs, it will make it tough for Deadpool to do Overcrush damage as the 7 cost D are going to be high, so I need to buff more and go as fast as I can, enter 7 cost #2, Mortarion, which has a global that “Pay ‘shield’. Target character die gets +1D”. If I can roll lots of shields, I can pump with his D, then flip it with Bizarro global, giving a higher A for Overcrush. Sabretooth, if I do purchase, can be a useful blocker and if he gets KO’ed, I can try for regenerate. I have never played with Bret before and I thought his ability was neat. I would purchase Bret and have him attack with Deadpool. As I am typing this and going through my build, I realize, I need a lot of shields. The only other shield card I have on the team is Atlantis: Vast Kingdom. I put this card on for the global, “Pay ‘fist”shield’. Move a Sidekick die from your Used Pile to your Prep Area. Field a different Sidekick die from your Used Pile.” to help prep and to make my 4 cost cheaper, Enter 7 cost # 3, The Rock, his global, “Pay ‘mask’, and Sacrifice one of your Superstar dice. Reduce the cost of the next die you purchase by ‘2’.”. I could use Atlantis global to prep and field a sidekick, then use Rock global to sacrifice the sidekick to make the 4 cost Trio and Atlantis a 2 cost. If I buy Atlantis, I would not want to roll it on action face but shield to help with the globals. The last 7 cost #4 on the team is Logan Grimnar: High King of Fenris which has Overcrush and he also has the same ability as Bret. If I happen to roll 7 dice, I could use The Rock global to make the 7 cost a 5 cost and probably buy The Rock and/or Logan. And for my last BAC slot, I had no idea what to put, so I went with prep from Villainous Pact global, where you pay a mask to prep a die from your bag if there are no dice in your prep area.

Mike brought a team to clear my board and go in for the win. He had Doctor Strange: Never Have you Known His Like, that copies an action die when used and paired with Thrown Brick BAC to ramp up. He also had the same Rock I had and to make all this work, Captain Marvel: Reality Gem which when rolled on energize (double energy face), I would have to re roll all my characters. He was taking some time to build up to this and was able to purchase Deadpool which was able to do damage, Bret and Sabretooth. I believe I got his life down to 13 and then stalled out once he bought Mantis: This One Knows, “While Mantis is blocking, if she is assigned combat damage equal to or greater than her D, prevent all damage to you from target attacking character die”. He was letting my characters through and not taking damage. He eventually had two Mantis in the field and he was ramping up to buy his 7 costs. I couldn’t really do anything. He was using Thrown Brick damage to KO my characters and then copy with Doctor Strange, once he rolled Marvel on her energize face, I wasnt able roll any characters back. Sabretooth was my saving grace for re generate but failed, leaving my field empty and he got 20+ damage. Even If i did roll Sabretooth, I still had no chance to win as the Mantis shut me down.

Nick also had a Doctor Strange and Thrown Brick combo to ramp. Had Yellow Lantern Ring to discount his 7 cost by 4. I wasnt sure what his win con was, maybe use Under Surveillance to make his character unblockable? I stuck with the same plan as before of purchasing Deadpool and pushing with him which worked as Nick didn’t have a field and was able to get him down to 10 life until he stalled me out with Mortarion: Toxic Presence which “When Mortarion blocks, blocked character dice deal no combat damage this turn.”. There goes my damage. But, Nick brought Under Surveillance (thanks), I bought one of them and used it with The Rock that I had purchased to deal 5 unblockable damage. I had really good bag management and was able to pull Surveillance again to do the last 5 damage for the win.

Mike bought a team with my fav. card Mystique: O Bitter Victory that get +1A/+1D for each other characters in the field zone on both sides and the same Rock card as me. He also had Big E: Powerlifter’s Physique that reduces 2 or more damage to only 2. That is going to cause some issues. I was able to attack with two Deadpools, that I flipped stats to deal 9 damage to Mike’s life which I didnt think he would take. Once he got two Mystique and Big E in the field, then it became difficult to get damage through. I started to use my shields to flip Big E A and D, forcing him to block with Booker T global and also use Deadpool global to deal damage to Big E. At least I can get 2 damage through and chip away, which did work. Bret really helped as well cause two characters had to block him. I was able to win this game but it had taken some effort to get around Big E and Overcrush was tough with Mystique getting up to +10A/D.

The best part about this game was the Battle of the Mighty As$-Tartes! LOL (watch to see why ;P)

Playing the Canadian trio was fun, though I only bought Sabretooth in game 1. Deadpool is a great card but probably not the best in this theme. Bret was also a fun card, forcing the opponent to think about blocking him (with 2 characters) or else they could take 5 damage. I would use him again for sure in a future team build.