Week 94 of the Weekly Dice Arena ran this past Wednesday.  The theme was “A little this, a little that”.  Your Team would be made out of 2 Campaign Box/Team Pack releases and you must build a Team using 4 cards and 1 BAC from each.  This was branded as a “Green” event, which meant you should be building the slower, more “fun” Teams.  The more crazy the combo, the better.

When I saw the build restrictions for this one, there was really only one Team to choose… 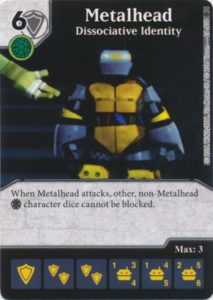 A green event like this was the perfect excuse to break out the Turtles.  When Turtles is the goal of the build, really there is one core piece you need… Metalhead.  Metalhead essentially makes all of your other Turtles unblockable.  That is the win condition.  Get enough stats on board and swing.

The big problem with Turtles as a Team, is the Turtles themselves are not cheap.  Unless you are going with blank characters, they are 5-cost characters.  When your win condition depends on getting four 5-cost characters out, in addition to a 6-cost win condition, you can only depend on one thing… Turtle Power. 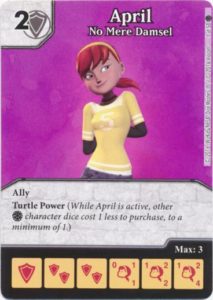 For those that do not know, the Turtle Power keyword will give you a discount on all other Turtle Affiliated characters.  This meant, that for every character in the Field that has Turtle Power, will make buying the next one easier.  This Format should be slow enough to allow this to happen.

To get to the more expensive Fab 4, you need to start with April.  She is the cheapest character with this Keyword.  From her, you move onto whatever Turtle you can afford at the time.

I included Leonardo, Michelangelo, and Donatello with the same Keyword to pile on the discounts.  The only Turtle that did not have Turtle Power was Raphael.  I included the version that prevented my Turtles from being targeted by Globals/Action dice.  In event of something like Static Field, he would be a handy tool to have in the toolbox.

Four Turtles, a sidekick, and a robot left only two Team slots left.  Ramp is fairly difficult to find in the Turtles sets, I chose to include the swarming Foot Ninja.  Swarm is not the best Ramp option out there, but at least it was something.  To finish off the Team, and sort of stick with the theme of the build, I included Shredder.  I really had no intention of buying him.  He just fit with the Foot Ninja.  Theme over efficiency here.

The Team is now set, and I needed some BAC options.  The first one I included was Mutation.  The Global would allow me to spin up my Turtles to higher levels to get to those bigger stats.  The action itself could be used as a source of removal against my Opponent.  Turtles lack removal, so this was better than nothing.  I was stuck with the initial TMNT Campaign Box for my last BAC choice.  There are not a lot of options in this set to be honest.  I went for the closest thing to Ramp here (well churn) in the form of Special Delivery.

Could the boys in green hold their own in the WDA?  Let’s see how it ran.

Game one was against Becky Lynch along with the Jerry Lawler Global.  That is pretty much all you need to know here.  This one made the stream, so you can check out all of the action on the Twitch channel (and YouTube when Ross get’s it uploaded).  With the presence of the Becky Lynch Global, it allowed me to get to the Turtles a little easier.  The game was still slower than I thought it would be, so I was able to get the pieces that I needed.  However, they could not hit when they were needed before the redhead took care of them.  Becky was just too powerful.

This game was against a 50/50 Adventurers/Justice League Team.  He admitted that it was essentially two mini Teams, and he was going to play the Justice League side in this game.  Wonder Woman (Strike), Batman and Watchtower for the stat buff, and Aquaman for the discount.  Two slow Teams here, allowed the Turtles to build their forces.  Strike proved difficult to pull off for my Opponent.  Without the threat of Overcrush, it was not difficult to throw chump blocker in front of the big Justice Leaguers.  Some Mutation shenanigans allowed me to get them into the Field when I missed the rolls.  Once all of the pieces hit at the right time, the Turtle stats were plenty to deal lethal damage.

The final game of the night was against an Asuka Team which was using the Booker T BAC to control the distribution of Blockers.  Both of our Teams were really one shot Teams that took some time to build up.  He did bring the Ric Flair Global, which meant that I really likely needed 3/4 Turtles in the Field to get the lethal (assuming I had the spare 4 energy).  I got close, but he managed to remove much of my Field with Booker T and some selective blocking.  I had the all or nothing turn where I needed a couple things to roll and lethal would be there.  I was one Turtle short of achieving this.  He rolled plenty of dice with Booker T the next turn which gave him lethal.

Even though I went against my own personal advice of never going “Full Turtles”, it was still fun to run.  Better Ramp would absolutely make it better, but that really was not an option in this Format.

The core of April, the Turtles, and Metalhead is fantastic and thematic.  There is not much else to say here.  It works well.

The Foot Ninja really was not a player on the night.  On a slow Team, depending on Swarm as your Ramp mechanic is not really all that efficient.  I bought it once, but I would not really call this a good card on the Team.

Shredder really served no purpose beyond paring with the Foot thematically.  In a perfect world, there would have been a better Splinter or some other Turtle affiliated character to include on the Team.  Really, this Affiliation could use some more members.  How April and Splinter are not part of the Team is beyond me.

Speedy Delivery is… ok.  There are better things out there, but not in the card pool that I had to work with.  It was ok churn when I needed it, but the cost is just difficult to justify.

Mutation is a great card in almost any Format.  The Global is great for spinning shenanigans and in this case, getting the Turtles bigger if needed.  The action itself is where it was at it’s best.  Since missing rolls can be devastating for this Team, this gave another option to get characters into the Field.  Although it was never used for this purpose, the removal option was nice to have.

Overall, Turtles is the definition of a “fun” Team to play with.  The strategy is not that complicated with it.  Field all the Turtles and swing with everything.  One shot Ninja KO.  When it fires, it is glorious.  If it fails… well, you played Full Turtles and you have to accept it will happen sometimes.  There are definitely ways to make this better.  In this Format though, there is not much room for improvement.  It works… or it doesn’t.

What would be your “Go To” Team for this type of a Format?  What did you play in the WDA?  If you have not played in a WDA (every Tuesday night at 9:00 PM EST), why not?  Let us know in the comments below!