A day late on getting this up and I have to apologize for that.  I was licking my wounds after my stellar performance this week.  It was a good 0-3 for me, but I still think there is something to build here.  I will save sharing this team until it is a little more refined.

Luckily, all is not lost though.  Gord, one of my local players, created a thing of beauty.  It was incredible to watch this Team play, and the scariest part was that this version can be much, much better than what he made.  Without further ado, I give you “Spot the Allies“.  Gord is taking the driver’s seat from here on out.

The Team:  Spot The Allies

Sometimes the team you end up building isn’t really the one you were thinking of when you started. That’s not always a bad thing.

This week’s Wednesday constructed event fell on Valentine’s Day, so I decided I wanted my team to include at least a nod to that. But how?  Make a team based on a famous romantic couple? Nahh. Valentine’s Day colors? Red, pink and maybe chocolate? Again, nahh. Ultimately I decided to go with something based on the love fueled Star Sapphire Corps, and ended up specifically choosing the common Wonder Woman – Loved By the Gods. Her ability is when she’s active if I roll three shields, my sidekicks are unblockable.

So I decided to fill out the team with shield characters and allies. 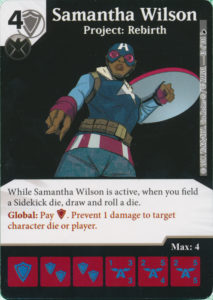 Ever since I saw the common Samantha Wilson I wanted to her pair her with uncommon The Spot. Once they were both active, that would allow me to draw and roll two dice every time I fielded a sidekick. Since I wanted shield characters, this was a great time to try it out.

FUS Ring was there for the global, to minimize the risk of not being able to buy 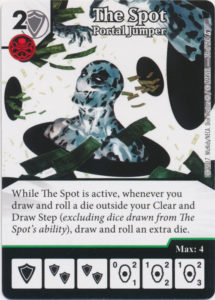 Samantha before my first bag refill. Either of the shield energy fixer global cards would serve the same purpose, but I don’t have either of them. (Also, now that I think of it, Ring fits the Valentine’s Day theme better than Cyborg or The Bifrost.)

The rest of the team was shield energy allies – Jane Foster, April from TMNT, and Alfred Pennyworth.

This was against a Hulk – Daisy Johnson – Fighting team. I wasn’t able to land Wonder Woman the first time I drew her – it didn’t help that I overlooked my opponent having the Parallax global. I got her out the second time around but wasn’t ready to attack. I was outrunning my bag – I had two Ally dice I could field, but an empty bag. I used my last energy to reroll those two dice with Parallax, and they both came up characters. I had been hoping one or both would come up shield energy which I could use as fuel for the Samantha damage prevention global.

Then my opponent used Fighting, and attacked with Hulk and Daisy Johnson. Daisy’s ability went off, taking out everybody’s sidekicks and dealing me 10 damage from Hulk in the process. Because of Fighting, I then had to knock out five more characters – I had two left in the field. Hulk and Daisy had 9 A between them, but he had a fist left for the Hulk buff global. Exactly enough for lethal.

This was against Jourdo’s team with rare Danger Room, Casey Jones: Mutant Hunter, Scarlet Witch: Hex Bolts and other stuff. Unfortunately for him, I’d started to figure how to play my team and I got some favorable rolls.

Once my team gets set up, if Big Entrance lands, it can do a fair approximation of a perpetual motion machine.   Spend two shields for two Allies, pop them in the bag, field an Ally, draw and roll the two dice that had just been bagged, rinse and repeat. Frankly, it was bonkers how quickly I could buy my dice and grow my field. When I landed Team Up on one of those turns he didn’t have anywhere near enough blockers to stop enough attackers to prevent me from getting lethal.

This was against a rare Black Bolt – Deadly team. He had several options for Deadly – Medusa, Karnak, and the Cap that gives sidekicks Deadly when fielded, but he pretty much stuck to Karnak in our game. He used the combo to clear my field a couple of times, but he didn’t send many other attackers through (partly because he didn’t have all that many characters he could have sent.)

Wonder Woman had become an afterthought by this point, my plan being numbers and Team Up. The problem with that: you need to get the action face on the action die. I had a goofy turn where I didn’t land my Team Up die, but had landed Big Entrance. With my bag empty, I bought the second Team Up (and another die). Field sidekick, roll those dice, energy on the action die. Spend those two and one other on the third Team Up, same result.

So my opponent got one more turn, and drew his Black Bolt. It took his Relaxing to do that, however, so he only got one roll and it came up energy. I lived.

On my next turn I finally landed a Team Up.

My Round 1 opponent finished 3-0 on the night to my 2-1, but my team was the talk of the store. I had not actually anticipated how crazy the Samantha-Spot-allies combo could get. Once I saw it in action, it was really impressive.

The core team (Samantha-Spot-allies-Ring or shield Energy fixer) has a LOT of potential, probably meta-impacting. I recommend keeping Big Entrance on the team as well, and a good portion of those allies need to be cheap ones with negligible fielding costs. There’s a variety of options for win conditions that could be attached.  Admittedly I didn’t have to cope with potential problems like Shriek or Green Devil Mask, but this is hardly the only team those are issues for.

Wonder Woman proved to be a less important part of the team than I intended, but as for the Valentine’s theme, I guess I did play matchmaker of sorts. Samantha Wilson and The Spot do make a cute couple, don’t they?