Have you ever had a card where you’re just looking for an excuse to use it? In my case, that’s how I felt about Loki: Father of Mayhem. So much fun, so much shenanigans to be had! 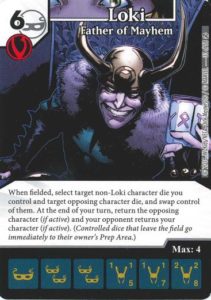 It requires you to give your opponent a character, though, so with that in mind, I set up some…

Now, I’ll be blunt: sure, this team could win if I’m lucky, but first and foremost, I wanted hilarious shenanigans to happen with Loki, and every decision was made with this in mind.

Of course, Loki himself is the key to this whole thing working. But when I use his ability, what do I give my opponent? Enter Nightwing. If I use his flip ability correctly, I can give my opponent a character which is unable to block. On top of this, Nightwing has some fantastic attack stats, which I can steal from my opponent if I use Splinter’s Teachings while I’m attacking. 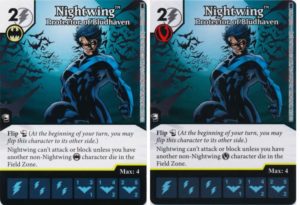 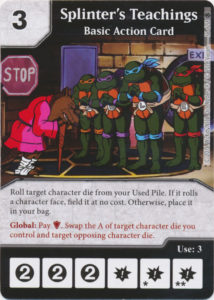 I also decided to put in Villainous Pact. Not only will the ramp and churn come in handy, but the action works as a fantastic win condition, especially with Loki: if I first use Villainous Pact, my opponent must select a non-villain to block with. I can then steal that character with Loki and give my opponent a Nightwing or a sidekick. After all, don’t forget that Villainous Pact, when you use it, also prevents your own characters from blocking, so your opponent will still be unable to block with the character you give him (so long as it’s not a Villain). Yes, at this point I’m doing an evil laugh too.

However, with all of this, I need damage; lots of it. Enter Kree Captain. The global’s helpful to get Loki, but really, it’s the character that serves my goal; he gets real huge, real quick, as you may remember from my Surtur build. It helps that my characters so far are all villains (or they can be, in the case of Nightwing). Side-note: don’t forget that since his buff is static, your opponent can’t stop him with Splinter’s Teachings!

I threw in the rare Absorbing Man to potentially double the fun with Loki. It’s also fun to copy your opponent’s when fielded effects. And seeing as Absorbing Man is in there, I threw in Huntress; she acts as strong removal (especially on a 3-cost) that can get 2 characters off the field easily and make a major change to the board state.

Meteorite serves for control primarily (been meaning to try her out for a little while), though the other side could make a decent buff with Asborbing Man if I can time it right. Billy Club is there for its fantastic combo of removal and sidekick fixing, and Malekith is there for his global, to make it easier to re-field Loki and to get Villainous Pact if I choose to get that backup win condition.

I started off against a team with Batman: Plays Too Rough (the one that gets buffed by sidekicks) and a bunch of allies. Despite my team being based around villains, this was a great matchup. Meteorite was my first purchase (to avoid being swarmed by allies), and I set up Nightwing and Absorbing Man, then used Loki to take my opponent’s Batman while giving him Nightwing (on his Villain side), allowing me to give Batman Overcrush. Between Batman, Wong and the rest of my attackers, I hit him for 18 damage. He managed to get me down to 5 life afterwards (though Meteorite being there was making his life very difficult), but it was too little too late; I used Loki again to give him Nighwings and get enough attackers to sneak the last few points of damage in. I won.

I went up against…Bolt Ring? Yeah, one of our old players decided to hop on tonight, and as usual, we welcome it, even if it means playing against strategies we are absolutely not prepared for. Admittedly, while he made his build strong, he didn’t make it horrifyingly painful. And in the end, I made a big misplay; I should’ve gone for Meteorite again. I didn’t do it quickly enough, and he rolled tons of cheap bolt characters with 6 bolt energy. Yeah, that’s way too much damage; he won. (this happened one turn before I could’ve done some seriously hilarious shenanigans though)

For this match, I was paired up against Hulk + Immortals. Not the best matchup for him; he went for Hulk early, so guess what Loki did; I gave him Nightwing, took his Hulk, hit him for 7 damage and thus forced him to re-field Hulk and start his strategy over again. He then made the mistake of attacking me with Fandral, KO’ing my Loki (I made sure to KO his Fandral) and allowing me to do this again. He was keeping a lean field, trying to damage his stuff for Hulk, and it backfired as I stole his Hulk and attacked with it (and other characters), using Splinter’s Teachings to put Nightwing’s attack on a sidekick. I won.

Attune was my opponent this round. This was not a competitive build; rather, it was a fun (but still strong) Attune team. I went for the whole Nightwing + Absorbing Man + Loki combo again, but this time, I also used Huntress. Outside of Xandala and Gold Dragon, my opponent’s characters had low toughness, and I decided to use that. She had a terrible roll with her dragon (it landed on a 3 fielding cost with her only having 2 energy), leaving her field with only 2 Yuan-tis and nothing else. I had a light bulb moment: instead of giving her my Nightwings, when I fielded Loki (with Absorbing Man active), I gave her two sidekicks, keeping Nightwing to attack with. I then fielded Huntress to KO both sidekicks, thus not needing to save shields for Splinter’s Teachings (which, considering some painful luck in fielding costs, I would’ve been unable to use that turn). I then swung in for too much damage and won.

-Using Loki with Nightwing is just dirty pool. I can’t think of a better option in Modern with Loki; giving my opponent stuff they just can’t use is hilarious and surprisingly effective. Because I would also use Splinter’s Teachings, it made for a very deceptive team (appropriately enough) that would get lethal (or close to it) seemingly out of nowhere.

-This was helped by a mistake I saw my opponents make; they were misreading the table. They saw themselves as the “beatdown” (the player who will win faster if both players come out swinging) and got pieces of their win condition on the board (the only player who was right in doing so was the Lantern Ring team). Problem is, that played into my strategy perfectly, where I could just take their win condition and beat them with it.

-Fielding costs were a huge pain in this team: between Nightwing and Loki, it was tricky to make sure I had the energy I needed to do Splinter’s Teachings and just about anything else. Often, I would purposefully keep double energy rolls with either of these characters, saving fielding them until I could really make it count.

-Huntress + Absorbing Man is an underrated combo. Yeah, I know, doubling Nobby or Firefly is better because it gets you closer to winning the game, but if you’re looking for something strong, but where your friends won’t hate you (too much), this can be a fun one to play with too.

-This team may need some form of mass removal to deal with situations where an opponent fields tons of characters; sure, Huntress helps, but there’s only so much she can do. It wasn’t an issue tonight (except against Lantern Ring, perhaps), but it’s a clear weakness of the team. If I tried making a stronger build with this, I might throw Green Devil Mask on there.

-Madame Masque could’ve completely wrecked this team. Part of the reason I felt comfortable running this is that I knew people stopped using her recently at my FLGS. Beware Masque if you’re planning on doing a similar team. (Billy Club is your friend in this scenario, or you could look into having Black Widow or some other removal)

-This build hardly had any of the more traditional control pieces (Shriek, Blob, Switch, Bishop, etc.) because I just wanted to see how Loki would work; those control pieces tend to become crutches and would’ve distracted me from my strategy. Meteorite really pulled her weight though; I was impressed at how oppressive she gets. She also relieves the pressure of having to field tons of characters against an aggressive team. I may revisit her in the future.

-Kree Captain didn’t get particularly huge, surprisingly enough. His global was an absolute boon, though, and made sure I could always get Loki relatively easily (alongside Villainous Pact and Billy Club’s globals, of course). In most games, he was useful as a complementary piece, but he was not my main damage source; I could often get enough damage on the board with my Nightwings and whatever else I had available. Still, he was useful overall, but putting 4 dice on him was a bit much.

Overall, I had some good laughs with this build. Maybe someone can make something a bit more competitive with that Loki; I’d love to see that happen.

Edited to fix a broken sentence in the early parts of the article.