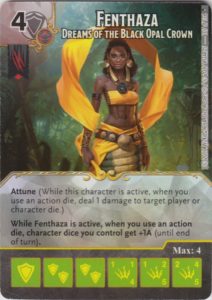 The original plan for this week was to continue to work on more SP//dr shenanigans, but then this little lady fell into my lap.  Once I found out what her ability was, I knew I had to have her and make a Team around her.  SP//dr can wait until next week (maybe).

Attune is a fun ability that lets you ping off annoying characters or  directly damage your opponent.  The choice is yours.  This beautiful lady adds to that effect but giving your characters increased attack each time you use an Action Die.  Now, if only there were some decent cards that your could put together with this…

The Team:  Two Ladies and a Little Elf.

Obviously Fenthaza was the centrepiece.  She was going to make things beefier every single time I used Attune.  There was no question that her partner in crime had to be Yuan-Ti.  Just not the jerk face one.  I went with the common because she was unblockable when I used Action Dice (and that would be a central part of the strategy here) and this synergizes well with what Fenthaza does.  Now to build out from there.

Malekith was there for his ability, and not the Global (although it could help in the right situation).  He would allow me to put the Action Dice back into the bag, which is where I want them.  The big question was what actions.  Investigation was a no brainer for me to add.  Ramp and churn in one handy die, and with Malekith active it should work really well.  I also needed something cheap and useful.  Hello Kryptonite, my old friend.  Goodbye annoying characters.  Now I need some filler pieces.

Mr. Mxyzptlk was a card I have not used much, and because of the temptation of my opponent buying my Investigations, I wanted him for some added burn options.  If my opponent used a BAC, Mxy would copy it and Attune would trigger. Not a bad option to have (but full disclosure, it did not come up once tonight).

Three slots left.  I seemed to have accidentally focused on Bolts and Shields here.  Might as well stick with that theme.  I went with Speedy Delivery for the Global (because Wizkids broke the actual action).  Buffing Yuan-Ti is not a bad thing, and I should have Bolts to spare.  How do I ensure I have Bolts?  Duh!  Energy fixers.  Merlyn is great for this and a great back-up plan for winning if everything else goes to crap.  You know what is better than one energy fixer?  Two!  Why not add Mjolnir?  In addition to the fixing Global, it is a decent action as well.  The last spot was up for grabs.  I toyed with a few options here:  Pseudodragon (to increase Attune damage), General Zod (to copy Yuan-Ti’s ability, but with a bigger body), Crystal (to re-roll actions); but finally settled on Felicity.  She gave the same ability as Crystal, but for all my dice, instead of just the actions.

There is the build.  Let’s see how it ran.

First game was up against a Hulk/Static Team that relied on Jimmy/Superman ramp.  Static would ping Superman and he would Prep dice in addition to burning me to death with Hulk.  I got the core out pretty fast and used early Attune to kill off Jimmy and Static as quick as I could.  I was able to send a 9A Yuan-Ti through pretty early in the game and managed to stay ahead of the Hulk.  The Attune burn was great for softening him up and the simultaneous pumping of Yuan-Ti from Fenthaza was a lethal combination.

The good old Jabroni Axe.  I have such plans for you later.  Now to deal with you hitting me.  The other main pieces of this Team were a blast from the past.  Silver Sable to make things unblockable and Black Panther, who got a +2A bonus when he attacked alone.  Giganta was there to spin things up.  Black Panther is an 8A character on his level 3 face.  Combine that with the Axe and he is a 16A.  When he attacks alone, he is 18A.  I knew where the problem was going to come from.  Now to deal with it.

Let me just explain my Team for a second.  It is an action-based Team.  If I do not have actions, it does not work well.  Well, I had the actions… but I missed some key rolls where I could have removed the Panther from the field before he and Sable were together with the Axe.  Even with my pieces in place, they would not work without those actions.  I took the 18A to the face.  It hurt.

The Warriors Three with Hela for some Immortal shenanigans.  Since Wizkids has yet to address the UC Hela question with regards to what actually becomes Immortal, we ruled it that everything has Immortal while she is active and all discounts apply.  Right or wrong, we will see, but that is how we played it tonight.

I bought my parts early, but Fenthaza did not want to come out of the bag.  I actually checked at one point that I actually placed her in there as it felt like it was taking too long to cycle her out.  It did not help that I missed more Investigation rolls that I feel I should have.  I eventually got some higher level Yuan-Ti’s on the field and built up my board.  When Fenthaza finally hit, I had enough for lethal thanks to her buffing ability.

I know, I know… Cube would have been a much better choice for this Team.  I made the conscious choice not to play that card, but do realize that it would have made an immediate improvement.

Fenthaza and Yuan-Ti are made for each other.  Their Attune abilities are great on their own, but their other abilities make them the Dice Masters Hans and Franz.  Well, mostly Fenthaza… but I needed an excuse to use a Hans and Franz GIF.

Even though I whiffed my Investigation rolls more than I care to mention, I still feel it is the right  BAC here and Speedy delivery fits this build very well.  Malekith proved to be excellent in keeping the actions where I wanted them.  I think he would be an excellent piece in any action based build.  I never used the Global here, but I can definitely see the appeal of that too.

Even though it felt like overkill, I would keep both energy fixers here.  Having the option to pull extra bolts to use on Yuan-Ti was always a nice option to have.  Mxy never came into play, but I would keep him on the Team.  The option to burn on your opponent’s turn is too good to pass up.  Felicity was a nice option, but was not that impactful.  I am not sure I would keep here, but I don’t know what I would exchange her for.  Not a bad piece of the puzzle, but not a great one either.  I am thinking Pseudodragon for version 2.0.

Overall, the Fenthaza/Yuan-Ti machine works very well.  Honestly, Fenthaza alone is pretty good and could work well on other builds.  There are definitely holes on this Team, and Switch could have killed me, but it was fun none the less.