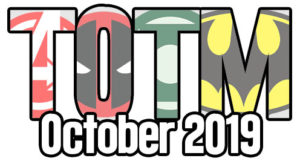 Hello Dice Masters Fans!  Last week (apologies for the lateness of this article, we will keep it short and sweet), we kicked off the Team of the Month (TOTM) Competition for October 2019.  This time around, we decided to welcome our new members, Reg and Kim to DM-North with a single affiliation format.  The goal of this build was to have a team that shared the same affiliation symbol.  Actions were allowed as long as they were thematically linked to your chosen affiliation. If you want to read about the details of the build, you can check out the original article here.

This was a really casual night with some fun games and some unique affiliation builds.  Here were the Teams that participated:

For myself,  I decided to go with the Bat Family affiliation. I always put the promo unblockable Robin on my team but this time decided to leave it out and focus on one of my favourite cards, Nightwing: Flying Grayson. 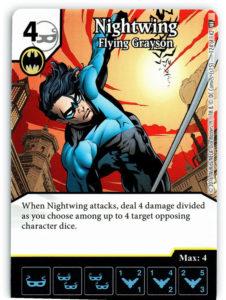 Nightwing’s main job, was to attack, hopefully clear the board and do some decent damage if on his high side. I used Commissioner Gordon: “Good Cop” to help with the fielding cost of Nightwing. Gordon is such a great card as your non-villain character dice cost 2 less to field. He is not specifically for Batman affiliated cards but for anything that is non-villain. 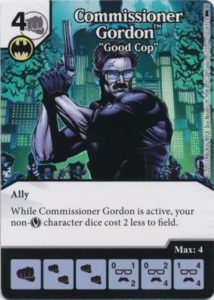 I had two other backup win conditions on the team, Dick Grayson: Brand New Bat and Batgirl: Babs which would be paired with Thrown Brick BAC. Dick Grayson I had never used before but thought I would give it a try. I did manage to purchase him in two of my games and he was able to do some decent damage but my opponents were letting him through. He would have to rotate through the bag again. I brought out Babs once which also helped to clear out the board if Nightwing couldn’t do it all. The purchase costs of these cards are a bit high which I tried to use Trusted Friend BAC to help but that only works for the first die you purchase. Churning through the bag was tough, I should have purchased all of Thrown Bricks. My only win was the bye but I had a fun time playing the Bat Family as I always do.

I didn’t get to see Matt or Reg teams in action as I played against Chris and Laurier. 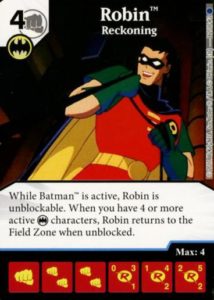 Chris also had a Bat Family team and his main win condition was to get at least four unique Batman affiliated characters in the field and attack with Robin to do the unblockable damage. He was able to bring Robin back to the field after damage was dealt as he had quite a board of Batman affiliated characters. My goal was to get Nightwing and Babs in the field to try and clear his board out but I wasn’t fast enough. Robin is a great card but it does take time to build up to Robin if he is your win condition.

Laurier brought a Guardians of the Galaxy team. He built up a board with Cosmo Space Dogs along side Star-Lord and Drax and to my surprise Rocket 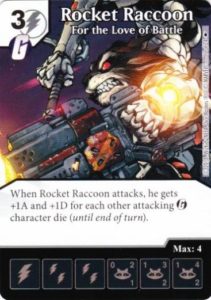 Raccoon: For the Love of Battle who got really beefy with all the supporting Guardian characters. I just couldn’t build up a board myself and he managed to get big damage through. He also had Raised Shields BAC to give additional buffs and overcrush as well as the global on the card to buff characters. Rocket was definitely a highlight on his team.

For those interested in the actual results on the evening, here is how the games played out: 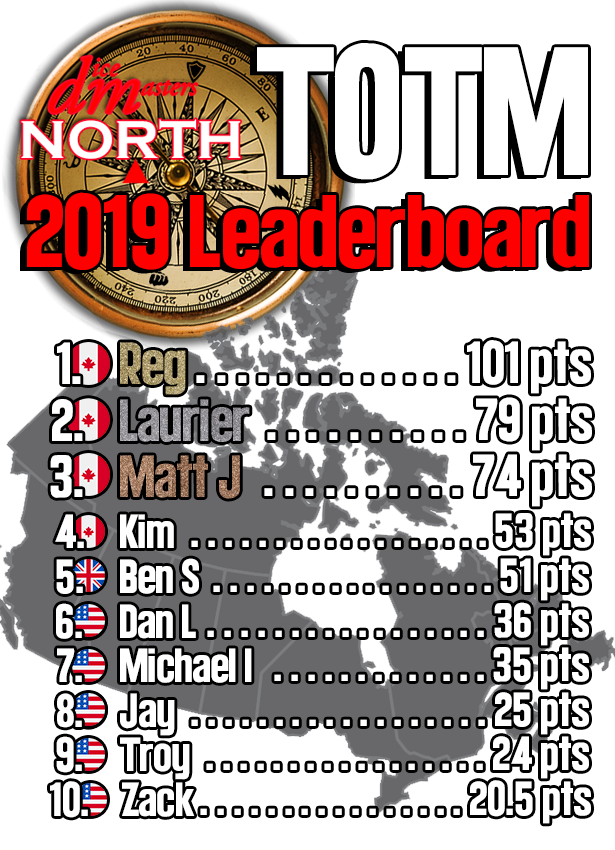 Congrats to Laurier for earning the Gold Star this month.  Thank you to everyone who participated in a fun night of Dice Masters.  Looking forward to the next one.

Until the next TOTM,

One Reply to “TOTM October 2019 Results”