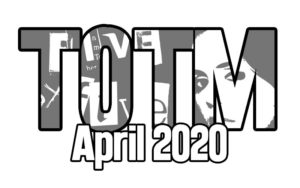 Hello Dice Masters Fans!  This past weekend, we ran the Team of the Month (TOTM) Competition for April.  For this month, we shook up the game by running the 5 x 5 Format.  For details on the build challenge, you can read the original article here.

The build was limited to only 5 cards on your Team.  This was a Golden Format.  Here were the Teams that participated:

We hit the ground running with the Twitch thing and we were able to broadcast the event live (you can check out the whole event while it is available on VOD on Twitch).  Check out, and follow us on Twitch at twitch.tv/dicemastersnorth to stay up to date on future TOTM Events.

I really did not know what to expect with this Format, as there are so many fun 5 cost characters that do not normally see play.  That was kind of the point of the Format… to dust off the cards that you have WANTED to play with but have been unable to do so.  Unfortunately, due to some technical difficulties on of the players was unable to participate and to make the numbers even I chose to drop as well.  The Satchel will have to wait to make its return. 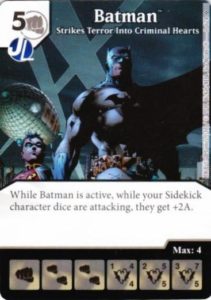 With our preview video giving some Team ideas, I suspected there would be some of those options showing up.  Batman made his presence know by showing up on three of the Teams.  Combined with the PXG Magnus Global, both the Sidekick buffing and the Batman buffing versions were quite effective in dealing ample amounts of damage. 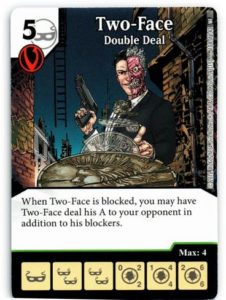 A card that I completely forgot about made a return on a couple of Teams.  Two-Face was such an effective card back in the good old days, and he was no less effective in tonight’s Format.  Unless you have a way to bounce him back, you are taking damage one way or another.

One Team that I wanted to to see fire, but unfortunately it did not cooperate on Stream, was the Villain Team of iamawalrus.  Lots of shenanigans on paper, and it appeared to be effective for him on the night.  Maybe it was just camera shy. 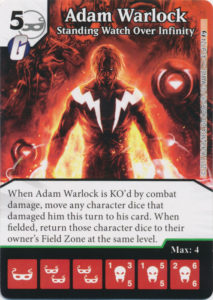 Speaking of shenanigans… Mr. Jackalopespam himself brought a, by his own admission, no win condition Team.  His goal was to steal all of your stuff and let the bag burn take care of the rest.  In this Format, that was a legitimate possibility.  I believe the record for captures on the night was 8, which is not bad.

Another blast from the past made a triumphant return.  The OG Iceman, Nova – The Human Rocket showed why he was so effective back in the AVX days.  Spoiler:  Nova is just as effective today as he way back then.

Surprisingly, the Warriors 3 did not come out to play tonight.  I thought for sure they would have been on at least one of the Teams.  Even with a little overlap of win conditions, there was an overall nice mix of Team Builds.  If you are interested in seeing the individual match results, you can see them on Challonge here.

The entire night was broadcast live on Twitch.  You can go to here to follow us and check out future TOTM.  The video is kept for a while on Twitch, but if you are not up for replaying the live broadcast, I did break up matches for YouTube.  Those are posted below.

Sorry, but there were some audio issues in the Round 2 match.  Working out the kinks on a new computer.

Hopefully, some of the other participants who did not make it onto the Stream will be willing to share their thoughts on what they brought to the table.  Please feel free to leave them in the comments below.  Reg also tried to record his matches, so watch for those on our YouTube Channel (while you are there, please take a minute to like and subscribe).

A huge thank you goes out to everyone who participated in the games and joined in the chat.  Your support is greatly appreciated.  It was fun to see a Format where some of the higher cost cards get to spend some time in the spotlight.  There was a nice variety of some old favourites along with members of the New Modern.

Would you run this Format locally (when there is a locally again)?  What would you run?  Anything that you would add to the Ban List?  Let us know in the comments below.

Thanks, as always, for reading!  Hope to see you back for next month’s TOTM!