If you listened to Episode 62 of A Double Double ‘n Dice today, I know why you are here!  It’s to check out our exclusive reveal of the final core member of the Fantastic Four, who will be joining Dice Masters this fall when Secret Wars releases.  If you haven’t listened to the podcast, well…spoiler alert?

Yes, The Invisible Woman:  Susan (Sue) Storm-Richards herself will finally be appearing in Dice Masters this fall when Secret Wars releases, and WizKids gave us this exclusive spoiler to share with you.  The matriarch of Marvel’s first family will be joining her husband, Mr. Fantastic; her brother, The Human Torch; and her good friend The Thing on your Dice Masters mat after far too many years. 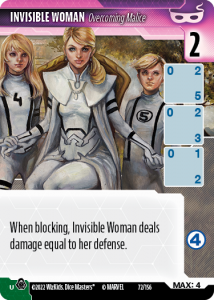 For our first look at Invisible Woman, we have the Uncommon version to share with you, subtitled Overcoming Malice.  One thing I have taken note of recently is how thematic the Dice Masters card names and abilities can be, if you’re familiar with the source material from the comic books.  This particular storyline is one I was not familiar with, but with the help of the Marvel Wiki I was able to do some research, which you may have heard if you already listened to the podcast.  If not…during this time, Invisible Woman had not fully come into her powers, and was struggling with her self control, when Psycho-Man used his emotional control panel on her to amplify her negative feelings.  She eventually attacks her friends and family before overcoming the Malice inside her.

In her Dice Masters card, we see this represented in her dice levels, which start with a low attack and defense, and then gradually increase for attack but a larger increase on defense, making her a good blocker, especially on level 3.

For her ability, it triggers when she is blocking – so only on your opponent’s turn, when your opponent has triggered an attack step.  It reads “When blocking, Invisible Woman deals damage equal to her defense.”  To me, this also seems thematic for Invisible Woman – she is protecting herself and those around her.

Other items of note are that she is 2 cost mask die, and masks are historically quite important to the game, particularly for Global Abilities.  Finally, she is a 0 to field on all sides, which is amazing.  It won’t cost you anything to put her in the field as a blocker.

How can we use her? 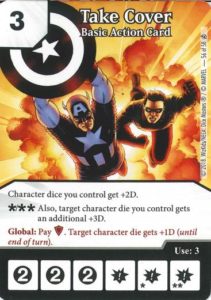 On her Level 3, dealing 5 damage when blocking is significant.  You could also buff her defense global abilities, such as:

With enough shields in your reserve pool, you could take out some big attackers.  Of note is that her defense and attack stats don’t flip – she just deals her defense when blocking.

Speaking of stat flips, if you bring her, and want to turn her into an attacker as well, bring a stat flip global ability, like:

Bizarro: Less Than Perfect, which reads: Global: Pay shield. Switch a character die’s A and D until end of turn.

Of course we can only speculate based on currently released cards – perhaps there is something in the Secret Wars set coming that could make this ability even better!  We will have to wait until the fall to find out.

I love that the die does not have an icon on it, to represent Invisible Woman’s power.  This is the first die ever to not have an icon of some sort and seems like a perfect decision on WizKid’s part.  The colour of the die, from the image, appears as though it may be a translucent light blue, and that would be amazing if it turns out that way; it’s exactly how I picture her force fields and invisibility power.

In the initial reveal of the redesign for Secret Wars, we saw that Franklin’s Galactus will be a character in the set, and I am making hoping that we will see the rest of the team as well, since they have not been printed since Avengers vs. X-Men.

The Fantastic Four are one of my favourite Superhero teams and I cannot wait to get them on my mat.

We’d love to hear from you, let us know your thoughts or questions in the comments below, on the Socials (@dmNorthTV), or join the conversation on our Discord.

3 Replies to “There’s Nothing To See Here…Or Is There?”