Full disclosure:  I decided on this Team in order to make some Highlander cracks in this article.  Seemed appropriate.  I haven’t played much with the Immortal keyword yet, so I decided to give it a go.  I decided to focus on this young lady: 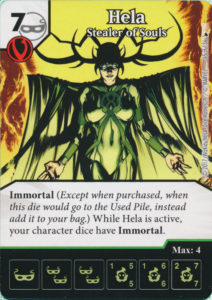 I figured she would be a good focal point because it wouldn’t matter what else I had in the field.  Everything would be Immortal.  Now to make it work.

The Team:  Hela McCloud of the Clan McCloud

So Hela was the main part of this Team.  The pieces around her had to work well with Immortals.  I decided on Jane Foster to basically make everything free to field.  Not a bad economical decision.  I passed on the discount version of Jane for two reasons:

The Global on Ring of Winter was going to help me get Hela as well as any other big boys on the Team.  Speaking of big boys, Heimdall is here for both his Global (HXG) and character ability.  Field Heimdall and spam away with him.

Thorbuster Iron Man was put in the Team because he is an incredibly big body that will be super cheap once Hela and some other stuff is out.  Bishop was for protection while I tried to establish my field in the case of non-combat damage Teams.

That is a pretty decent core, but not a win condition on their own.  Sure, beating down your opponent can work… but do you know what works even better?  Overcrush!  Hello Jarnbjorn!  Every single character gets a buff and Overcrush while Hela is out when this action is used.  Not bad at all. The final slot went to Mjolnir mostly as the energy fixing option, but the action could work in a pinch.

Resurrection was there for the Global to help with ramp.  Momentum was here because sometimes you make bad choices in life.

I was up against a fairly classic Teen Titans Team with the fan-favorite Wonder-Ring combo with a pinch of Wasp to prevent my Global usage.  Fun.  Early Bishop purchase in this game.  I was not going to get myself burned to death here.  The fun part of Bishop here was laughing in Wasps face as I continued to use Globals as I wanted.  After the defense went up, I could focus on Jane and Hela.  Eventually built up with other characters and added in a Jarnbjorn for the killing blow.  Not one turn lethal, but my bodies were bigger, so I could swing more freely here.  I got lucky that he missed all of his Green Devil’s Mask rolls in this game.

Immortals vs Immortals.  Jarnbjorn vs Jarnbjorn.  He had that pesky Volstagg to have some built in Oversrush and was using the Rare Jane Foster to make his Immortals naturally cheaper.  This was a LONG game… I am not even kidding.  The other group played 3 games while we slogged through this one (I don’t think anyone was watching time on this one).  The big problem here is we both had enormous bodies and it was hard to clear things out.  He hit me, I hit him.  Eventually the axes started flying along with all the Thorbusters and I came out on top.

Hulk burn looked to be the biggest threat on the other side of the table.  The Staff of the Forgotten one was there and could clear me out easily.  No long game here.  I would have to move fast.  No messing around.  Jane and Hela were purchased as fast as I could.  The next purchase was Jarnbjorn.  He missed some key rolls and Hulk never showed up.  I spammed with Overcrushing Immortals and got him to zero fairly quickly.  If Hulk had rolled, this would have been a very different game.

Immortal is pretty fun to mess around with.  Jarnbjorn is almost a must add when focusing on this type of a build.  You could have gone with either version of Jane Foster here, but it made more sense to save on fieldings costs overall.  Heimdall’s Global is really tricky to use efficiently.  His character ability was great here.  If he got knocked out, I either got a free character or Prep.  Win-win!

For these big bodied Teams, the Ring of Winter is helpful to get a bit of a discount.  Bishop was not essential to the build, but sure helped out in that first game.  Mjolnir was fine for what it did.

Resurrection is great ramp when HXG failed me (and that happened more than once).  I still have not cracked the HXG code.  I want it to be great, but it is just “ok” for me.  Momentum was excellent in jamming up my bag for my opponent.  It was a terrible choice on this Team.  Scorching Ray would have been a much better choice and would have synergized well with this Team, as expensive characters would likely live in the bag.

This is not a bad mechanic to play around with.  I did mess up a few times forgetting to put the Immortals back into the bag.  Rookie mistake right there.  I think this type of a Team has some potential in the new Meta.  We shall see.

What do you think of Immortal?  What alternate builds have you made with this Keyword?  Let us know in the comments below.

As always, thank you for reading!

2 Replies to “There Can Be Only One”