“Spider-man, Spider-man
Does whatever any Affiliation can!”

When Infinity Gauntlet was released, we all fell in love with the Rare Spider-man… and with good reason.  Do you remember that Spidey also had a super-rare in that same set?  Spider-man: Superior Team Up got some attention, but not nearly what his Rare brother saw.  The card states:

Spider-Man’s card is considered to have the affiliations of all the character cards on your team.

Those who have been around the game for a while know that this card was made to work with the Basic Action Card, Team Up.  As a reminder, Team Up reads:

This is a pretty simple combo here:  load up on affiliations for Spidey to gain and fire away with Team Up.  The more different Affiliations on your Team, means that Spider-man can hit that much harder.  That is a great basic strategy… but what if you could break the combo?

Look at that Global on Phoenix Force Cyclops.

on your turn. Move a Phoenix Force die from your used pile to the field at its lowest level.

Since Spider-man has the Phoenix Force affiliation, because of his ability, this Global should potentially allow you to field him on the same turn he is purchased.  Yes please!

Like I said, there is really not much magic here.  I want to put as many different Affiliations on the Team as possible and buy Spider-man and Team Up.  Let’s see if we can make the best use of these choices to make the Team somewhat functional. 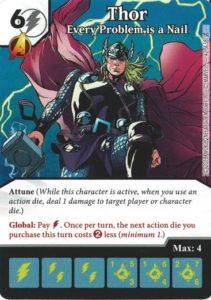 The main play is to buy Team Up itself, so we want something that will help with that first.  There are lots of cards to choose from here.  Thor (from Infinity Gauntlet) and Red Dragon (from Battle for Faerun) would be good choices, but I ultimately chose to use Thor from Avengers Infinity.  They all have the same basic Global Ability, which we plan to make use of, that states:

. Once per turn, the next action die you purchase this turn costs

With this at my disposal, Team Up drop from a 4 cost basic action, to essentially a 3 cost.  That one extra energy savings is always good.  Why this Thor over the shiny new one from Infinity Gauntlet?  This Thor is an Avenger, while the other one is unaffiliated.  Old Thor is in for that reason.

The next big issues that I see are things like Static Field to bounce my attackers back and negating the whole Team Up strategy.  Gladiator (from Dark Phoenix Saga) is the key here.  We get a unique affiliation from the Shi’ar, but more importantly access to the ultimate defensive Global Ability for an attacking Team:

when you attack. Your character dice can’t be the target of Action Dice or Global Abilities (until the end of turn).

I chose the Intimidate version here, mostly to give me a form of removal for anything that might have shut down Spider-man.

We’re sitting at 3 Affiliations so far.  It is high time to start taking advantage of the multi-affiliated characters that the game of Dice Masters provides.

Poxwalker is purely there as a source of cheap fists in order to power the Phoenix Force Global Ability.  Batman is there to give me an option to get more Sidekicks into the Field Zone, which will give Team Up more targets.  While I don’t expect to actually purchase Black Adam, he does give me an ability to really annoy my Opponent by sending his KO’ed characters to Used instead of Prep.  I have now upped my Affiliation game from 3 to 11.  When Team Up hits with Spider-man in the Field Zone, all of my character dice get +10A/+10D.  Not a bad buff at all.

With two spots left, I really have not addressed Ramp or Bag Control.  Enter the classic Ring-Res combo.  Resurrection will give the Ramp I am needing to get the engine running and hopefully allow me to control my bag decently.  Ring adds to that by allowing me to remove a Sidekick die from my Used Pile to set the numbers right.  9/10 times, I am going to use it to field a Sidekick to get my army size up quickly.

There’s the build.  The basic strategy for this Team is:

Will the spider spring from its web for some big hits?  Let’s see how it ran.

Up against some Energize shenanigans with good old Domino (from X-Force Team Pack), Magik (from X-men Forever Campaign Box)) for some direct damage, and Rare Black Widow (from Infinity Gauntlet) to spin out my stuff.  He also was kind enough to bring Clayface, which might make Poxwalker that much better to bring out Spider-man.  Oh yeah… and Parallax to give me some extra chances at Team Up.

I followed the plan and got Spidey out early.  With the threat of Black Widow out there, I went for a second Spider-man so that I guaranteed myself a spare if the first would be spun out of the Field Zone.  With the Field set, it was a matter of fielding Sidekicks and cycling back to Team Up.  When it hit, I had more characters than he did and there was really nothing he could do defensively.

Super-rare Jubilee (from Dark Phoenix Saga) and Mary Shazam (from Superman Kryptonite Crisis) were the big hitters here.  To make matters a little worse, he had the defensive God Catcher (from Trouble in Waterdeep) that would prevent me from using Team Up until after the Attack Step is declared.

The early turns went according to plan, and Spider-man was lined up with Team Up right away.  Then Team Up whiffed and I decided bag control was for chumps and went into buying more Team Up dice in lieu of using the Resurrection Global properly.  He was able to get Jubilee out early, and with my Globals in addition to his Collector Global, he had the ability to ping out 4 damage a turn if he wanted to.  My Sidekicks fell as fast as they fielded.  While I tried to stabilize my side of the board, I used the “life is a resource” strategy to take a bit hit from Mary.  I managed to get Team Up to fire a few times to clear out his Field, but never had the board presence to get the damage through.  I ran out of life, due to the Jubilee pings, before I could get that one big hit in.

Unfortunately, we had a small turn out, so we did not really get that many games in.  1-1 is fine, but I would definitely like to see how the Team could do against some other builds.

This is one build where everything just kind of worked how it was supposed to.  Spider-man and Team Up are a match made in heaven.  Just slapping characters on the Team with any Affiliations make this combo work.  Adding in the Phoenix Force Cyclops Global breaks it wide open.  Full credit to World Champion ccm00007 for actually pointing out this Global to me (and showing me a much grosser version of this Team).  I can honestly say I have never looked twice at it before, but now would include it on any version of this Team I built in the future.

Thor could have easily been Red Dragon for some added damage and the Team would not have suffered from it.  You still get a unique Affiliation out of either character, and the Globals net you a cheaper Team Up die.  Pick your poison here.

Poxwalker, Batman, and Black Adam all served the purpose of buffing the Affiliations.  Poxwalker was the only one of the characters that I ever purchased and definitely nice to have access to the fists for the Phoenix Force Cyclops Global.  I did not need Gladiator on the night, but would absolutely keep this character on the Team.  In the event of Static Field showing up, you need something to allow you to try and get your damage through.

Ring-Res is such a great combo for controlling your bag.  Too bad I chose to ignore how useful it was in the second game.  I would love to see this make a return in Modern.

I knew that as soon as I saw Spider-man, I wanted to give him a try with Team Up.  I’ve done that now.  Would I play this again?  Yes and no.  I would not bring this to a casual night.  It can fire off too fast for something like that and will make you feel bad.  I have always loved the Team Up action and enjoy playing it.  Spider-man makes it a little too easy to pull off, but is still fun to pilot.  Maybe for something in a more competitive event?

Questions about the Team.  Let us know in the comments below, or on our Socials (@dmNorthTV), or join the conversation on our Discord.

Finally, if you are in the Calgary area, feel free to join us every other Wednesday at Shoebox Games & Cafe, starting around 6:00 PM local time. If you want to join a great group, get in touch with us on the Calgary Dice Masters Facebook Group. Come join a welcoming community and play some Dice Masters live!!

One Reply to “The Superior Spider-Phoenix”