In this week’s episode of, “let’s make a terrible card work”, I really wanted an excuse to make Noxious Blightbringer useful. Such a cool ability, but he never gets any love. I had actually tried playing with a TMNT card with a similar ability before (Spike), but it hadn’t worked too well. Since then, though, I’d been brewing around it to make it work. And with Blightbringer now easier to play with than Spike, time to take out…

The Team:  Give your opponent energy…and give them death.

Ok, to explain this combo, I first have to mention an important rules nuance with Batman. When he forces opposing characters to be rerolled, if those characters land on energy faces, they can’t stay in the Field Zone. Because Batman does not say where those dice go, they go to the Reserve Pool. And this is where the Blightbringer comes in. Since I’ve just (hopefully) sent energy to my opponent’s reserve pool, he turns that energy into damage. 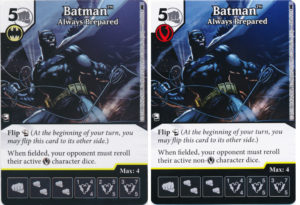 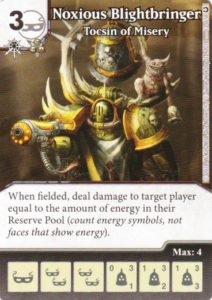 Absorbing Man, in this context, is self-explanatory: I get to double when fielded effects: that’s two rerolls for Batman (with dice on energy faces leaving the Field Zone between rerolls) and twice the burn with Blightbringer. Once this fires off, I just need to attack into a mostly empty field, so there’s a clear path to victory here. 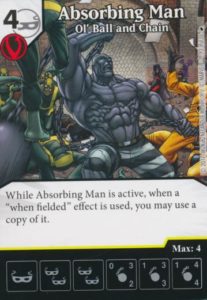 For anti-blanker tech, I went with Confront The Mighty. It’s an awesome removal tool as a 2-cost, and not only can it deal with blankers, but it can pick off any stragglers that would be left after a double Batman reroll. It’s an obvious fit.

For re-fielding, I went with Stone Golem. In Modern, Fabricate is probably the best way to KO and refield 2 characters, and with Batman’s stats, there’s no way he gets KO’d easily. It’s just the easiest option to use.

As for adding to the characters rerolled by Batman (since he can only reroll villains or non-villains, depending on which side he’s on), I went with Ra’s Al Ghul. He’s by no means the only way to make Batman better, but he’s the best option that doesn’t clog up the bag. Against most teams (especially with the state of my local meta), that global should be enough to make every opposing character into a non-villain.

As for the rest of the team, Kree Captain is there because I really need the global (since I rely on a 4-cost and a 5-cost). Plus, it’s a 2-cost, which is useful in a pinch. Scarlet Witch is there so Confront isn’t used against me, Resurrection serves for ramp and churn, and Meteorite is there to make sure my opponent attacks me as little as possible, so that their field can be full of characters when the Batman + Blightbringer shenanigans happen.

I started off the night against a Dreadnaught + Staff team. (use Dreadnaught + Staff for removal, and charge in) This was an interesting matchup, in that I was repeatedly setting up my combo, and…it wouldn’t work. I literally had to buy two Batman dice and try on three separate occasions to get the combo to fire off. Thankfully, my opponent wasn’t much luckier; he was getting the whole removal thing going pretty well (I should’ve bought Scarlet Witch), but he didn’t get enough high-attack characters on the board to want to attack. This allowed me to use Meteorite in an unexpected way; my opponent would KO her with Range, then I would flip her, field her, +2A to everyone (Absorbing Man was active) and charge in. Meteorite survived, so I’d flip her on my following turn for control, after which he’d KO her on his turn… It made for some interesting back and forth. After a couple of attacks like that, I had softened up my opponent quite a bit. So when the combo finally fired off, my opponent had no way to stop it. I won.

One of our occasional returning players, he brought along an SR Ultraman team. This was actually a funny matchup; he had Hellblazer to make my life hell, and I had Scarlet Witch to make his life just as bad. This came down to me using Confront The Mighty to KO his Hellblazer pretty much every turn and hope he didn’t come back. It worked one turn, and his field was mostly empty. However, I hadn’t bought the combo yet. And so Meteorite, with Absorbing Man, came to save the day. I fielded a bunch of sidekicks, used Meteorite, made my characters really strong, and charged in for the win. Not how I expected to win, but I’ll take it!

For my last game of the night, I went up against Hulk + Immortals…oh wait, not anymore. He switched out Immortals for Dreadnaught, Kree Captain, and the double-overcrushing Thanos. Yikes! This could’ve gotten nasty real quick; however, he had some bad luck with his rolls and could not buy Thanos. While he did buy Hulk, he rolled her on level 3 without enough energy to field her. That was the only opening I needed. After a couple of awkward attempts to get the combo to fire off (thank goodness for Confront The Mighty to get my stuff off the board; was also quite funny to get rid of his Dreadnaught that way) I managed to get the Batman + Blightbringer combo to fire off for 8 damage, and it emptied his entire field. I then attacked with everything I had and won.

-I actually had multiple builds of this. Originally, to make Batman more effective, I was going to make everything a villain with R Danger Room, field Batman on his non-villain side to reroll all their stuff, and I was going to run the usual 3-cost Kree Captain for extra damage. I decided against this; it was too hard to get Batman, Noxious Blightbringer AND Danger Room on the same turn. Could still be funny though.

-I know it would be unreliable for the same reason as Danger Room, but I wonder if Instant War could make this combo better…

-Meteorite was definitely my surprise hit of the night. I knew from prior experience that the control side of her was fantastic. However, the offensive side was surprisingly potent, especially with Absorbing Man active. The more I play with this card, the more I like it.

-An interesting, if not entirely unexpected consequence of my strategy: my opponents didn’t like to keep many characters around. Probably because they didn’t want the Noxious + Bat burn. This actually made Meteorite more useful though.

-With Villains decreasing in relevance in my local meta, Ra’s Al Ghul was definitely a fantastic tool to use with Batman. Definitely a good combo to keep in mind.

-I don’t think I used Fabricate all evening. Confront The Mighty was my #1 tool for self-KO shenanigans for sure (it was quite good at doing that too!), as I rarely had 2 dice to KO at once. Stone Golem could easily be switched out, probably for Malekith (though I don’t tend to buy many high cost actions in this, so take this suggestion with a grain of salt).

Overall, that combo was clunky but fun. I liked how it forced my opponent into making bad choices (keep a lean field or take a bunch of damage). Too bad Blightbringer wasn’t around when the old PXG was in the meta; he would’ve been destructive as heck. He still hurt quite a bit as it is. While this is definitely more of a casual build, it’s still a lot of fun.