Do you like randomness?  Do you like chaos?  This is the format for you.  The basics of it are that every 5 minutes, a new rule will be introduced that will affect the game state/play until the next rule is introduced to replace it.

These were the  global rules we would be up against:

To sweeten the pot, the organizer added in a series of special abilities for everyone’s favorite character, Common Vixen.  When the Global Rule was activated, Vixen had the chance to gain some fun abilities.  These were the possibilities:

Here is how the whole thing works:

After five minutes,  and every five minutes thereafter,  three dice will be rolled. One D20 for Global shift rules,  one D10 for Vixen abilities and one D6 for Vixen triggering. If the D6 is an odd number then the vixen ability will activate.  Each global shift will only occur once until each shift has been activated at least once.  The same will apply to vixen abilities.  If a number comes up a second time,  the next highest available number will activate.

This night would be difficult to prepare for, so I took the easy way out and grabbed something I already had made and threw Vixen on it.  I went with the Team that I have been playing in the CR Gameroom Invitational Tournament, Fixit/Hellfire.  I made just a few changes to make it fit this format a little better.

The Team:  Fixit/Hellfire… and Vixen.

This Team is pretty simple:  I field Beholder to use the Kree Captain Global & either Blue-Eyes or Ring of Winter to purchase Mr. Fixit for a fist.  I then get Mr. Fixit out and roll Hellfire Club with some other characters and hopefully swing in with a very big Fixit after the KO buffs.

Everything else on the Team was to help that happen.  Kree Captain, Blue-Eyes, Red Dragon, Ring of Winter were all for discounts to get to Fixit and Hellfire.

The Ring of Winter gave me a pivot if Fixit got shut down by anything.  There were plenty of Dragons around to make this viable.

Anger Issues was there to help pump Fixit in case there was someone bigger than him before triggering Hellfire.

Resurrection was my only source of Ramp.

Vixen was there… well, I hope you read the above section to understand that.

Let’s see how the night went.

Sidekicks, Sidekicks, and more Sidekicks.  Neither one of us went for Vixens here, and we missed out on some decent abilities.  He was building a Field, which worked well for my plan.  Unfortunately, he had new PXG to bring out a blocker when Hellfire cleared the way.  I managed to set up this board state and was proceeding to the Attack Step… 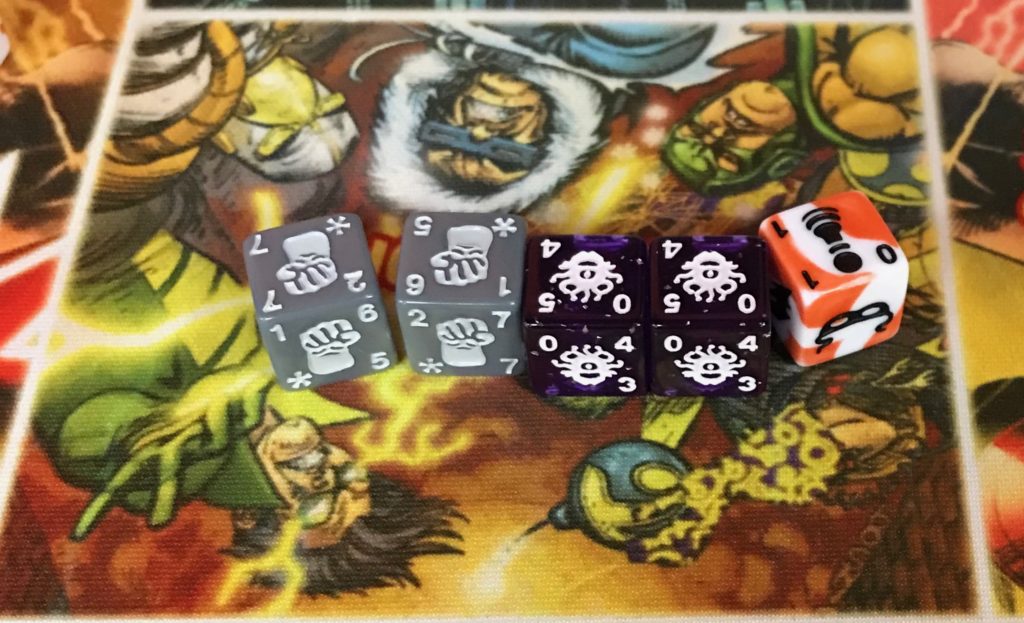 … exactly when the rule activated where we switched seats.  Now, this was my board state:

I fielded another Sidekick with new PXG, but died from my own Team on the next turn.  He fielded a Red Dragon and another Beholder plus fists galore to pump on that turn.  We laughed at the timing of the switch as he was going to die right at that moment.

Gord brought some interesting shenanigans with Villains and a big ol’ Harley Quinn… plus Shriek.  Set-up was the same here.  I knew he would be building a Field so I would work my way to Fixit.  I figured Shriek would be an issue here, but he never bought her (by his own admission because he said he was stupid).  It took longer than normal to get things going as I had trouble getting more than just a Sidekick in the Field.  I took lots of pokes in the eye before Beholder finally showed.  The rule that hurt in this one was being able to pay the purchase cost of your Opponent’s character to put them back on the card.  Gord used my discounts to put Fixit back, so I returned the favor to his Harley.  Eventually Fixit hit along with Hellfire for an quick board clear along with a lethal buff thanks to a lot of characters getting KO’ed.  Vixen was not a factor again in this one.

This last game was against a bit of a mish mash of characters, including OP Iron Fist and a Gold Dragon.  He also was nice enough to bring old school PXG for some ramp/churn help.  I decided this was going to be a speed game as these rules were messing with me.  The one I feared the most was the Penguin rule, and I knew it had a chance to come up in this one.  I went hard on the PXG early to burn myself for 2 in the early game.  That let me buy all of my pieces very quickly.  A couple of Red Dragon pings while buying Hellfire Clubs and some bag burn of his own, brought him down to 16.  He was building a nice little Field for Hellfire to burn.  Then the rule change hit… and it was good.  You could place one die on any face you wanted each turn.  Hello level 3 Fixit on one turn.  Hello Hellfire Club on the next turn.  A 20 attack Fixit marched across an empty Field.

The Team was great.  I have been playing it for the past few weeks and it is still fun to pull off the combo.  Hellfire is excellent removal if you are playing with large stats on your side.  It is a little dangerous as it weakens your side as well.  This is why it pairs so well with this Fixit.  Also, Beholder is what makes this engine run… and man does it run when the rolls work out.  Fielding Beholder and buying a Fixit for a single fist is so very satisfying.

Let’s talk more about the Format.

Despite getting screwed a little bit, I really enjoyed the unknown part of this.  So many times throughout the night players would be ready to do something big only to be foiled by the new rule that just activated.  Although it never happened in any of the games I personally played, some of the others did get to experience the power of Vixen.

It was an interesting idea to make such a garbage card into something that could be used.  However, I think the consensus was that it was not really needed if we go another round with it.  The basic rules were random enough.

I look forward to trying this again.

Let me know what you think.

One Reply to “The Gods Must Be Crazy”