Hello Dice Masters!  Welcome back to our second TOTM for 2018.  We were impressed with what you gave us with the Green Lantern theme last month and are excited to see what you can give us for April.  Before we get to this month’s challenge we need to give the proper attention to what happened last month. 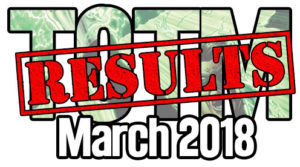 For the March 2018 TOTM, we challenged you to give us your best Green Lantern builds.  The centrepiece of the the Team had to include cards with the Title Hal Jordan or Green Lantern.  The rest of the Team Build was up to you.

We got some excellent entries for March, and to be honest, there were some really difficult choices to narrow it down to two.  These were the Teams that were nominated to be played on Dice Masters with James and Zack:

The fact that Paul managed to put Hal Jordan: Green Lantern AND Green Lantern: Hal Jordan on the same Team is what hooked me.  The win condition itself was intriguing as well.  There are lots of moving parts here and I really want to see how they play out.

I’ve always had a soft spot for Hal Jordan: Fearless, with his beefy stats and strong removal. In my view, he’s very underrated. But what put this team over the top for me is using Cosmic Cube with Hal and Jocasta; the damage is buffed both from Hal to Jocasta, and from Jocasta to the opponent. It makes for a snowball effect that reminds me of my Vicious Raccoons team, and it’s a great new way to use an old classic.

Check out the duel between these two Teams here:

Steve’s Team proved to be the victor in this video, but who won the TOTM Title for March?  After tabulating the votes, the Winner of the TOTM for March 2018 is…

James and Zack both gave Steve their votes, and had this to say about their choices:

We liked how Hal Jordan was a great centerpiece for the team, and really enjoyed the combo with SR Jocasta. The control pieces really helped it out a lot, and the different elements really worked together. If we could change anything about it, we would replace flying car with common Sp//dr to have hal jordan deal double damage to Jocasta, making the team a little bit more deadly.

Congratulations Steve!  We will be reaching out to you to get you your prize pack.  Enjoy your title reign!  Also a big thank you to everyone who submitted a Team Build for this.  They were all great and we look forward to what comes for the next TOTM competition.

This competition will be open worldwide.  The submission deadline for this round will be 10:00 PM Mountain Time on April 20, 2018.  Submissions should be sent to mailbag@dm-north.com with “Team Build Challenge” in the subject line no later than the deadline date.  In the event that multiple Team builds are identical, the first one received will be considered as an eligible entry.  Rewards will be sent via regular letter mail to the recipient.  If you require tracking information, you will be responsible for any additional costs.  Members of Dice Masters North and Dice Masters with James & Zack are ineligible to submit Teams.

Here is the challenge for April 2018:

March brought us a Rebirth and showed off some interesting uses of Hal Jordan.  What would be a suitable theme for April?  The first thing that comes to mind is April Fool’s Day.  A day to play pranks and tricks on your friends and loved ones.  Who better exemplifies that than one of the best Tricksters in the Marvel Universe? 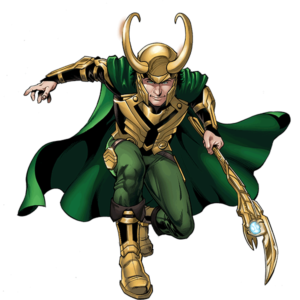 That is right boys and girls, we are going to focus on Thor’s little (half) brother.  Let’s see what you can do with Loki.  This, again, can be a Golden or Modern build.  The only stipulation is that Loki must be an integral part of the build.

Sticking with the theme, this month’s prize pack will have an Asgardian flair to it.

Can you outsmart your competition and show that you are the greatest of tricksters?  We all cannot wait for the Team submissions and seeing what you can come up with.