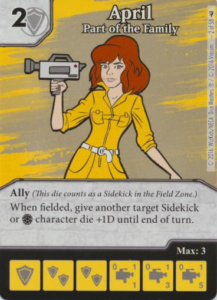 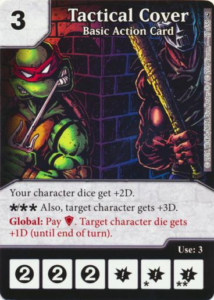 The most important pieces of this team are April: Part of the Family and the Tactical Cover Basic Action.

The former is a 2-cost Ally with 5D on Level 3.  The Tactical Cover action ( a re-named reprint of Take Cover from AvX, which has since been reprinted twice  more (SMWW, AI) under the original name.  Using it gives all of your characters +2D.  When it’s on burst or double burst (which on average it will be 2/3 of the time the action is used), you can give one character an additional +3D, so one of your characters can get a total of +5D.

So, with a Level 3 April die in my Field Zone, I can use Tactical Cover to make April 1A, 10D.

This does lock me into using Insect Plague as my other BAC, and needing one of the stat flip characters on the team.  I went with Ant-Man over Kal-L or Bizarro because, unlike the other two, my opponent cannot use it on my characters.  The inclusion of Wonder Woman: Child of Clay is practically a foregone conclusion on any team planning to do all or most of its damage from solo unblockable characters, but if I use Kal-L or Bizarro I’ll probably need to buy her.  Using Ant-Man, I’ll only need Wonder Woman if my opponent brings Static Field, or something else with a similar global. 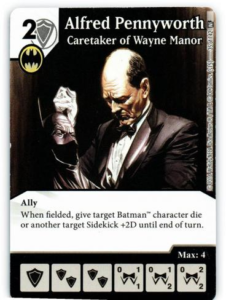 That’s both BACs and three characters accounted for.  What to put in the other five slots?  First choice is the common Alfred Pennyworth.  Yes, the common.  The Uncommon is a great card, but not what I’m looking for here.  The common has a ‘when fielded’ ability that allows it to give a target Batman or Sidekick die +2D.  And step one in the recipe is to increase the D of an April die as much as possible.  Remember, April counts as a Sidekick and can be targeted with this ability.

Also, Alfred is a 2-cost shield, which means if an Alfred die comes up energy, I can use that energy for the global on Tactical Cover.  So on five of six faces, when I pull an Alfred die, I can buff the D of an April die by 2.

The version of April I’m running has a similar ability, except that it’s only a +1D buff.  April is also a shield character which means if her dice can be used for the Tactical Cover global if they come up on energy faces.

It also helps that both April and Alfred have 0 fielding costs on all levels. 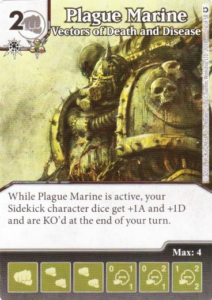 The next piece was Plague Marine: Vectors of Death and Disease.  It serves three purposes.  First, as a low cost fist character it’s a source of fuel for the Ant-Man global.  Second it’s a potential buff for my attacking Aprils.  Finally, it’s a method of KO’ing my April and Alfred dice so I can re-use their ‘when fielded’ abilities.

As long as I don’t field it on Level 3, I should be able to attack with it to get it out of the Field Zone if I want to keep some Sidekicks around to block.  (OK, a clever opponent could use the T Cover global against me to keep Plague Marine alive despite the 1D, but it’s a risk I’m willing to take.) 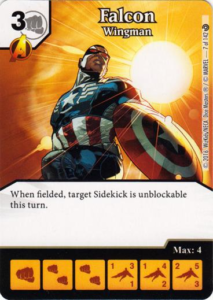 Next, there is Falcon: Wingman from the Civil War starter set.  His ‘when fielded’ effect is another way to make one of my Sidekicks unblockable.  Fist energy, and 1D on Level 1 on a character with a useful ‘when fielded’ ability are good.  The 1-1-2 fielding cost, not as good, but not a deal breaker.

The next to last slot goes to Rare Hawkgirl.  She gives me the ability to spin up any non-Villain character die when it attacks, and I do want my attacking Aprils on higher levels.

The final card is something of a flex spot.  I went with Rare Bishop, who I’ve been rather partial to since X-Men Forever came out.

My first round opponent was our group’s resident youngster, who is not a particularly sophisticated player.  She was running an X-Men and Villains team with characters from the recent X-Men Forever box – including the Blob who prevents opponents from buying or fielding 2-cost characters.  Also, she was running Brave Sacrifice as one of her BACs, and it has a global that allows the user to spin a target Sidekick (i.e. Ally) to Level 1.

She didn’t buy Blob until after her first bag refill, and it was one of the last dice out of her bag after the next refill.  That gave me time to get two April dice into my field (Level 2 and Level 3) and buy one Alfred die.

We both walled up.  I bought my Wonder Woman due to the silly Brave Sacrifice global, then I started using the Insect Plague Global to poke her for small amounts of damage, while I waited to get Tactical Cover on a burst face, a mask and a fist on the same turn.

She eventually attacked en masse, getting several Sidekicks through, but I was in control the entire game.  Shortly thereafter, the dice lined up for me to deal double digit damage, but since I’d already bled her down to 5 life by that point, it was somewhat anti-climatic.

Orbital Strike team that was using the same Plague Marine as I was (although he was really using it for ramp) and more important, the Invisible Stalker from the original D & D set that is unblockable when attacking alone.

I never managed to use the Tactical Cover action this game.  The Red Dragon global and a couple of hits from Level 3 Aprils buffed by the T Cover global and/or Alfred’s ‘when fielded’ effect before the stat flip let me get him down to 5.

I should have won there – his Plague Marine left his field Sidekick-free and consequently on the thin side, and I had sufficient advantage in numbers that I could have gotten the five extra damage, but I didn’t realize it in time.

He’d switched tactics to buffing the D of his Invisible Stalkers and using the Ant-Man global on them.  He got one more swing with one of them, which actually got me down to 2 life, but another unblockable Ally with buffed D and a stat flip got me the win on my next turn.

Jourdo’s Hela Immortals team.  I got near perfect rolls this game.  The Red Dragon global, Tactical Cover on a burst face, and April on Level 3 had him down to 9 life by Turn 4.  Buffing a generic Sidekick twice before flipping the stats got me another 3 damage.  And I had another Level 3 April in the field when Tactical Cover game around again.

It came up on the no burst face, but with Jourdo down to 6 life, I didn’t need the extra +3D from the burst/double burst faces.  (Embarassingly, it took a while for me to realize this.)  I did have the mask and the fist I needed to use the requisite globals.  Game Over.

This is a fun and fast team.  Buy one April die and one Tactical Cover and you’re ready to start swinging.

The dice rolls were favorable to me on the night. A disproportionate number of my April dice came out on Level 3, so that I only bought one Hawkgirl die on the night, and I don’t think I ever fielded her.

Falcon is a borderline card on this team.  He was useful at times, but his fielding costs are a nuisance on a team that is lacking for ramp (well, outside of Plague Marine).  But, it’s a team that doesn’t actually need much in the way of ramp – except to pay for Falcon’s fielding costs.

I like Plague Marine a lot on this team, even if I never fielded it once on the night, using the dice exclusively as energy for the Ant-Man global.  Still, I can see some circumstances where I would have fielded it had some of the games gone differently.

This is a team largely based around globals and action dice – tools that are available to your opponent.  So there is some risk there.

A team that was running action dice hate or global hate would cause some problems for this team, although Falcon should mitigate them some.  If someone is running Rare Wrecker, you can buy and field an Ant-Man die so you can use his global, and field Falcon dice to get unblockable Sidekicks.

Still, I went 3-0 with it, including one game that had a couple of good tools to spoke my wheels (Round 1) and a character that could use the tools I brought against me (Round 2, Invisible Stalker).

It’s not a perfect team (what is?) but I think the pluses outweigh the minuses.  And, as I said, it was a lot of fun to play.

What’s your favorite Ally or Ally team?  Let us know in the comments.