Long time no see!  Things have been a little crazy as of late, and as a result I am just now getting around to my regular Wednesday article.  What do you mean it is Sunday?  Time has no meaning any more.

I may not be attending a weekly live event right now, but I am still trying to get some games in when and where I can.  Right now, that means Online Play!  You have probably seen lots on this lately as it is our only real option to play with others.  I’m not going to hammer you more with this.  I’m just going to try and bring back some “normal”.

Last Tuesday, I finally had a chance to participate in the Weekly Dice Arena.  It is a weekly online event hosted by the one and only Ross.  Check out the link to his Twitch channel here.  On this night, the rule of the night was:   “Every time a die is KO’d, its controller loses health equal to that dies printed Defense.”  There were some limitations and bans put in place, and you can read about those here.

I had a few ideas as to where I wanted to go with this build, but I settled as this as my win condition: 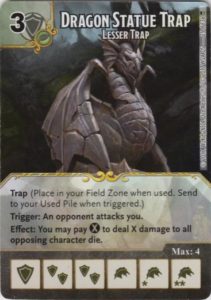 While not a card that will win on it’s own, in this Format it has a high shenanigan potential.

The basic ability of this combo is fantastic in that it can spray damage to opposing dice fairly easily.  With enough energy, you can KO almost anything.  This was my first hurdle.  In order for this to work, I would need an ample supply of energy.

What else would I choose here except Mimic Ramp.  There is little that compares to what this can produce.  I committed fully and threw all of the pieces onto the Team:  Mimic, Professor X, and Billy Club.  You should know by now how it works, but if you are looking at a top notch lesson on running Mimic Ramp, please check out this video from World Champion Ben Scott on Dice Masters with James and Zack.  So, this solves my main energy production requirement. 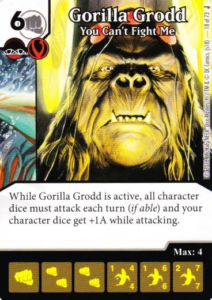 The other big issue with using Dragon Statue Trap as your win condition, is you need to be attacked.  What if you came up against a Team that is not planning to do this.  I added two tools here to help with that.  The first was Black Widow for the Force Attack Global.  In the event that the Global was shut down, I decided to run some monkey business… Gorilla Grodd.

Grodd forces EVERYTHING to attack.  Great on an aggro Team.  Also great on a Team that wants to draw you into a Trap.  The only problem here was that he would also remove my Mimic Ramp in the process.  The other issue is the 6 cost.  Yes, Mimic Ramp will give me the energy I need, but I like my discounts.  I decided to give The Rock a try for his Global.  Specifically, the Sacrifice component of the Global will work in my favor here (as it will not lead to life loss).

So, I had a win condition and a way to pay for it… as well a way to trigger it.  I now needed to protect myself from it.  Here is where I added a couple tools to help my situation.  Odin’s Fury has a Global that can remove one of my dice (Grodd) from the Field Zone until the End of Turn.  This will keep Grodd out of my hair, but also bring him back to frustrate my Opponent.  In case I need a reason to keep Mimic around and I am short on energy, the Kate Bishop Global (Bishtraction) will let me brin g him back.  As I am planning on running a lean Field, I will also be able to push back big attackers from my Opponent.

One spot left and I decided to double down on the Ramp.  I decided to give Walk With Elias a go for the Global.  The WWE Global is nothing new, as we have seen it on Heimdall and Professor X.  The real nice thing was that this takes up a BAC slot instead of a character slot.

So, the plan for this one is get Mimic Ramp up and going as fast as possible.  Get a good cycle of Dragon Statue Traps going through the Bag.  Use either Black Widow or Grodd to bring things into the Trap (whichever is more efficient).  Spend a crap load of energy to cause my Opponent to lose lots of life.

My first game of the night was up against Dan with good old SR “Never Say Die” Thor (I love this card).  Mimic was set up pretty fast and producing the energy he needed.  I needed to save insane amounts of energy to deal with the stats I would be staring down.  I believe Grodd was uncooperative in this game, but thankfully Widow’s Global was enough to get the ball rolling to bring his characters into the Trap.  It took a few rounds of the Trap, but it eventually did the job.

Game 2 was against Nick and his Tabaxi Rogue Team.  There would be very little (planned) attacking here).  He was going to burn me when I prepped dice and I wanted to Prep ALL THE DICE.  This one made it on Stream, so do check out Twitch for that one.  Once Tabaxi hit, it definitely slowed the whole Team down as producing the energy would also damage me.  Although Nick had little problem doing that to me with his Tabaxi throughout the game.  I took a little too long to pivot to Grodd, and the Traps had some difficulty removing the larger defense characters.  I eventually fell to a buffed Asuka (and friends) swing.

Comicsmike was my next Opponent, who was running the Fast War Machine and Black Tom Cassidy.  The higher defense of War Machine made it difficult to get rid of with the Trap.  Balancing Grodd with saving energy for removal became tricky in this match.  Eventually Mimic got KO’d with a level 3 Grodd in the Field.  He was able to return for some bulky stats.  A missed pull and roll from my Opponent meant it was game over no matter what happened.  I had enough energy for the Trap to take out the lower defense characters.  Grodd and Mimic were big enough to deal with his Fast War Machine.  There was no magic tricks for him to get out of this one.

There were definite holes in this Team, but for the Format… it worked pretty good.  The Widow Global and Odin’s Fury Global worked against each other, so I needed to depend on Grodd more, and I was sometime slow to buy him.

Grodd was fun to finally play around with and worked great in this build.  The biggest problem was keeping sufficient energy to remove Grodd on my turn, while also keeping energy to trigger the Trap on my Opponent’s turn.  Definitely a double edged sword here, but I was able to keep him in check for the most part.

Without Mimic Ramp, there is no way this machine could have worked.  Maybe with old school PXG… but not much else.  This Team was a huge energy sink.

The Rock was the perfect way to get to Grodd on this Team.   Sacrificing the character synergized well with the Format.

I have loved Dragon Statue Trap since I first drafted it.  It was always a fun card to mess around with, and seemed especially suited for this particular Format.  If you are not needing to spend your energy, it is a great defensive sink to have on your side.

Overall, this was a pretty fun Format from the Weekly Dice Arena.  I love the stuff that bends the rules of the game and forces you to think differently.  If you are free on Tuesday nights, I highly recommend check the WDA out on Twitch and join in the fun.

This coming week, it looks like they are running Ladie’s Night.  Hope to see you there!