A double dose of Team Building this week as I fit in 2 days this week at the local store.  This one was too fun not to share. 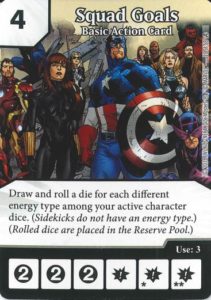 Have you ever looked at a card and tried to find the most ridiculous way to use it?  Enter Squad Goals.  This is one of the new BAC’s from the Avengers Infinity Campaign Box.  It is an OK ability, but not something that will likely see much play.  However, I was determined to make use of it… even if it was just for the memes.  So, the first challenge is how can I maximize the energy production from this card.  That was actually an easy call.  The first card to combo with this would be one of the “What If”‘s.  The best choice for this was none other than Captain Britain Iron Man. 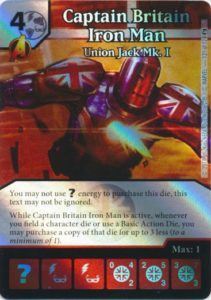 Full disclosure:  I decided on this Team Build before I heard the most recent episode of The Ministry of Dice.  It was just a happy coincidence that they tried to make Captain Britain work as well.  So, Andy and Chris… this one is for you.

The main purpose of Captain Britain was to make other things cheaper.  Also, each Squad Goals that came out while he was active would get me an additional 4 dice AND I would be able to buy another Squad Goals for cheap.  To finish out this combo, I added in the UC Spot from GOTG.  Now, Squad Goals would get me 8 dice.  That is a nice little energy engine there.  Now I needed some pieces to go with it.

Read on to see how it came together.

With the Crossover character being key to this Team, I went for the easy route and added in SR Katana from GATF and R Knowhere from GOTG.  Katana can usually be fielded on Turn 1 thanks to her Impulse ability, which sets up the swap to Captain Britain by Turn 3 or 4.  So far, I have 5 cards dedicated to my combo, making it a little overly complicated (maybe it would make the Doubleburst Guys proud?).  The core was set, but really did not have a win condition.  It was just a way to get massive amounts of energy.

I decided I needed a second 3 cost that did something other than get in the Field fast.  I went to the Common Kate Bishop… sorry… the Uncommon Kate Bishop.  My Field would likely be pretty lean and the Global gave me a way to protect myself if needed.  I still needed something to make use of Captain Britain’s ability.  BLOB!!!  I went for capture Blob here, as it would allow me to purchase a second one cheaper when the first one hit the field.

Lots of shenanigans, but still not really a win condition sitting among them.  I looked again at Deadman and Captain Britain and it hit me.  Lantern Ring.  ANY energy I rolled with these guys out would make things really bad for my opponent.  Not the most efficient use of the Ring, but definitely worth a shot.  Another bit of disclosure:  This was really my first (and last) time playing Lantern Ring with our Group.  I felt a little bad including it to be honest, but it fit the build well.

Lots of pieces in play here.  Let’s see how it worked.

This first game was against a X-Men Awaken Team.  He bought two of my Squad Goals early as he knew what I was up to with the combo.  This was one of those games where everything rolled well.  T1 Katana, T2 Knowhere, early Captain Britain, etc.  Everything just went right.  I used Blob to capture his Doop before he could capture one of my characters.  I managed a Squad Goals roll with Spot and bot Deadman and Captain Britain out with the Ring and had over 10 energy sitting in the Reserve.  Attacked with both and the Ring hit for lethal.

You know what is great to have back in Dice Masters?  The force attack Global.  This was basically a Black Widow/Deadly Gamora Team.  I could not keep my pieces in the Field much at all.  Anything that was there just got forced into the Deadly Gamora and was taken out.  I never got set up enough and got out-manned and out-gunned.  I forgot how efficient that Global was.

This Team was centred around unblockable stuff (Namor, old UXM Falcon) and a Blue Eyes for good measure.  I struggled to get set up in this game.  It took quite a few turns before I got anything out and I went with Deadman first to slow down the PXG ramp.  I had to keep my Field fuller than I wanted due to some BEWD in his Field.  Eventually Blob took out a Dragon by sitting on him, but I was still not set up.  I took lots of damage and wasted a lot of energy on Bishtraction.  Eventually, I hit with the Ring and Squad Goals for the massive energy burst.  Again, over 10 energy sitting in the Reserve and that mean instant death.

Hey look, Black Widow’s back with her Global.  This time, she came with the Batari who happen to be carrying their Avengers ID Cards.  You know how I said in that first game everything rolled just perfectly?  Well this game was the opposite of that.  I could not get Katana.  I actually had to use Knowhere on my Spot to get to Kate Bishop.  I never saw Spot for the rest of the game.  I managed to sit a couple Blob’s on the Batari, but that did not last long with the Widowmaker available.  By the time I managed to buy a ring, I was trampled by a hoard of Avengers punching through.  Ouch.

Meta Team, this is not.  Goofy combo, this is.  I loved this Team.  Sure, developing the engine to produce the energy was a little convoluted, but it was satisfying to pull off.  Drawing and rolling 8 dice thanks to Squad Goals and Spot was awesome.  The Ring did feel cheap, but I have always wanted to use it with a Crossover character and this Team seemed right for it.

Blob was a good add to combo with Captain Britain.  I was able to get cheaper Blobs which was a plus.  I was actually tempted to include Absorbing Man here to increase the Blob effects, but I felt I did not have the room for it on the Team.

There is not much else to say about this Team.  It was a combo players dream.  Have you ever used Captain Britain?  Any other uses of Squad Goals that you can think of?  Let us know in the comments below!