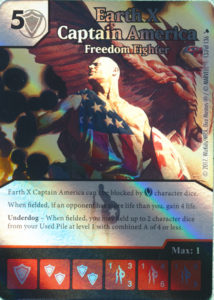 Sometimes you come up with this great idea that works well in your head and doesn’t necessarily translate into something good.  I was messing around with another Team Build, and had Earth-X Cap thrown on to see what I could do with it.  This version of Captain America actually has some decent abilities.  Built in life gain, free fielding of little guys and most importantly… he cannot be blocked by Villains.  With so many good Villains out there, he could be a good piece to play around with.  However, one die is really difficult to make work.  If only I could have more… 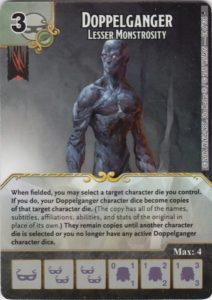 Ding!  Now I have up to five!  This could be good now.  Get Cap out, and copy him with Doppelganger.  If I am playing against Villains, these could be kind of nasty.  If only I knew that my opponents would bring a Villain Team, I would be set.  Hey… wait… Danger Room is a thing.  I could play against all of the Villains that I could ever want.  I really think this is going to work here!

With the solid concept in place, I moved on to the actual build.

So, the main image and Team name might be a little bit of a spoiler as to how my night went.  I will still walk you through the build though (because it worked in my head).

Cap, Doppelganger, and Danger Room were the core.  Ideally, I have enough of them out when Danger Room hits and I run through for unblockable damage.  I put in Jarnbjorn to basically double up any damage that went through.  Simple plan.

Mister Miracle was put on the Team to try and make the action dice cycle better as they were a big part of the plan.  Eye of Agamotto was there mainly for the Global to be able to get a key action die into the bag at the right time.  SP//dr was there purely for defence.  Some players like to play the non-combat damage game here and I thought I would see how the SP//dr handled it.  Dormammu was there because I hate the Green Devil Mask with every fiber of my being.

Seeing as I was going big in cost, I needed some ramp.  I chose to go with Cake as my first BAC as it has helped me in previous games get to the big players.  Resurrection is always a good play as well.

For what it was worth, let’s see how it ran.

Believe it or not, this was a mirror match of sorts.  They were using Rare Danger Room as well to do bad things to their opponent.  This was using Casey Jones who sucks up all the Villains when he attacks and Batari Battle Stacks to punch you hard in the face.  I was able to get Cap out pretty quick here, but could not attack with him until I had at least a Doppelganger out.  His Madame Masque made things a little difficult, but I was able to use the Danger Room Global to remove her and get the copy effect.  Now I had all the Caps I needed.  However, his board was building faster than mine.  I did manage to get a second Doppelcap out and used Jarnbjorn to do 8 unblockable damage (I could have hit for 7 more, but was not willing to weaken my field at the time).  I knew the writing was on the wall as his Danger Room was going to come out the next turn and his field was big enough to punch through.  If I rolled 3 bolts, I could have survived by taking out Casey before he could attack.  I rolled 2.

SR Yuan-Ti/Tabaxi Rogue cut you to death.  I made the mistake of buying all the Improvised Weapons on Turn 1.  If I was going to die by Yanti, I was not going to make it easy.  Unfortunately this, along with Tabaxi, made it really difficult to ramp and churn.  Cake became a liability.  I did manage to buy Dormammu and SP//dr, but they never made it through the bag before I died a horrible death.  Cap didn’t even come out to play.

This was some old school PXG, Imprisoned, Parallax, Elf Thief shenanigans.  I tried to keep my field a little on the lean side once he bought Imprisoned.  On the turn after he bought the first one, SP//dr came up.  I chose to burn SP//dr and bought the final two Imprisoned dice instead.  This quickly shifted him to buying his other BAC… The Front Line.  Needless to say, with PXG ramp, the ability to reroll with Parallax, and using Elf Thief to steal your energy to power your train… you can get a whole mess of Sidekicks out fast.  Again, my Team could not keep up with this.

Well, you can’t win them all.  I really want Jarnbjorn to work… I really do.  However, this card has failed me a few time now.  I think it is time for me to give up on it to be honest.  Mister Miracle was not purchased all night.  Even though the idea of Boomerang is attractive, I would not put this one the Team again.

SP//dr is a card I need to try again.  I honestly did not get a chance to use it all night.  Same with Dormammu.  With so much Action love out there, I like the idea of a card that just says “No!”  I might keep one of them on the Team, but definitely not both.

Eye of Agamotto just did not work for me.  It is truly the poor man’s Chalkboard.  If I redid this Team (and I will), I would sub this out for the OG Chalkboard.  Way better use of the extra energy when purchasing.

Danger Room, Cap, and Doppelganger are a great trio.  I just need better ways to buff the stats to make them more effective.  I might opt for a simple buff Global on another build.

The Team definitely did not perform how I wanted, but this Cap had way too much potential to not give it another go.  I went through a few drafts of this, so I might check out some of my original cuts to see if there is something there.

So, what would you do with Earth X Cap?  Have you made a good build with him?  I would love to hear it (because I didn’t).  😛

One Reply to “Spoiler: I Wasn’t Playing Iron Man”