Tonight, we tried something a little different. Rather than our usual Casual Golden Age, we did a Theme night with the following rules:

So with these rules, I took this chance to finally build a team around a really cool super-rare.

That’s right, I built a Guardians team. So without further ado, let’s dance.

Star-Lord is the piece I wanted to build around. Giving other Guardians characters Call-Out is awesome, and I wanted to use this as a way to practice using the keyword. 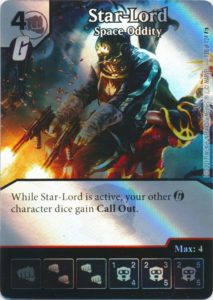 Obviously, I wanted a cheap Guardians character to throw at my opponent with this. Enter Rocket (yes, I chose the blank text; I didn’t want to damage each player in case I ran into a Green Goliath). Forcing my opponent to choose between losing a key character or take a large chunk of damage (3-4 damage at level 2 or 3) leads to tough choices all around.

And to reinforce this notion, I added three key pieces: Moondragon, to make sure I never deal with Rocket’s level 1 face, Starhawk, to make Rocket stronger (hey, Golden Age was legal!), and Drax, to buff up my guardians.

And there’s one really important piece to complete the offense: Thrown Car. Overcrush is a must if using Call Out. Think about it: Call Out means your opponent can’t gang up on a big attacker. So Call Out a sidekick, and you’re certain to get a lot of damage through even if your character is blocked. 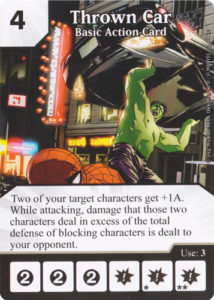 Groot served as protection against mass removal, Adam Warlock served to blank any defensive powerhouses (Adam was pretty much always level 3 thanks to Moondragon), and Nebula was there to mess with my opponent’s bag.

So with that said, on to the games!

Game 1 was against a C Hulk+Babs team (worth noting: this one player was exempted from building a theme team as he has a visual handicap). The one non-theme team on the night. But it worked out quite well; I used Call Out with Rocket to get key pieces off the field, and by the time Hulk was on the board, I had a pretty big advantage in life points. He did bring me down to 2 life, but by that point, Hulk was the only blocker he had left, so I managed to overwhelm him with sheer numbers.

I was up against X-men, this time, featuring Wolverine: Weapon Ten and the Colossus that gives an X-men character Overcrush. Star-Lord + Rocket, to call out Wolverine, was a really effective way to force him to take some damage early on. Once Moondragon hit the field, Rocket was always big enough to KO Wolverine. By the time he started blocking with Wolverine, the fielding costs really hurt him and stopped him from buying characters he needed. He did do a big swing for 12, but too late. I set up a big attack and overwhelmed him with numbers.

This time, against Bat-Family. With Alfred, Bruce Wayne, the whole shebang. That was a painful one. She smartly used Alfred, with Magic Missile, to get my characters off the field and get some big damage in. At some point, I had one chance to win if Star-Lord rolled, on any level, but he didn’t. She won the following turn. Bah, that’s life.

For the final round, I faced Teen Titans. This time, Star-Lord was functionally useless; with my opponent using Wonder Girl and Raven, I had no reason to try to target characters with Call Out. So I went for early damage to wear him down, and then I just went for a big setup: Moondragon, Starhawk, Drax, Rockets aplenty, and a Thrown Car. He did get a Cyborg in anticipation of Thrown Car, but I created a huge attack on one turn by fielding Rockets and other guardians, making Starhawk and those Guardians huge (Starhawk had 11A, and others had 7-8A). I attacked with everything, waited for blockers to be named, and used Thrown Car where it could deal the most damage. This dealt enough damage for me to win.

-For a theme team, this was awesome. Call Out hurts a lot in the right context. Using Rocket to do this was especially effective given Rocket’s high attack and great fielding costs.

-Moondragon is the sleeper hit here. Holy crap that ability is strong. Functionally, in a Guardians team, everything is at level 3, all the time. Do not underestimate her. 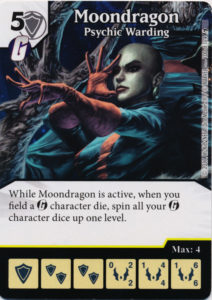 -If using this in a non-theme context, I’d definitely want a force block like Wasp, and a cheaper Overcrush mechanic like MJ. Call Out with a force block (used on the character you Call Out) guarantees that your big Overcrush guy is blocked, deals huge damage, and comes back. Nasty.

-I debated using C Groot to protect myself against globals, but then I couldn’t have used Thrown Car (because that Groot blocks actions too). If I could use something like MJ to give my characters Overcrush, C Groot would definitely be better than the rare.

We’re doing another theme night next week. I’ll probably go for a different theme for variety, but I like this one. 🙂 Maybe I’ll revisit this later in a proper Modern team.