What did you Play?

I’ve been looking at a lot of different options for the new Modern meta recently. One card I keep going back to is R Danger Room. A 2-cost action with a unique ability that gives everyone the villain affiliation. And another card I look at a lot is SP//DR, that makes villains take a lot more damage. Hmm, do I smell a combo brewing? Enter…

The centerpiece of the team is, of course, R Danger Room. Making everyone a villain is just a great starting point for crazy shenanigans.

Enter SP//DR. Once everyone is a villain, everyone takes double damage; that can hit hard really fast. And this brings me to Gold Dragon (the UC; I was expecting a dragon team to show up, so I wanted anti-Breath Weapon tech). Breath Weapon 2 deals 4 damage to everything. There won’t be much that survives that. Whatever would survive can be hit with Danger Room’s global. 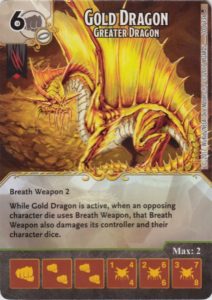 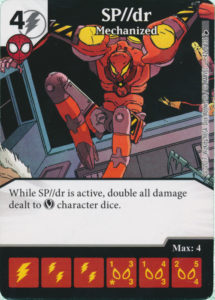 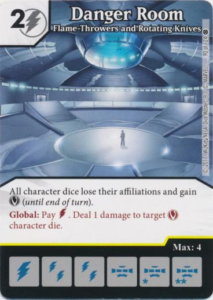 Bishop serves for defense, Nightwing as an alternate damage source (and is my only card that’s about to be Golden Age in this whole team), Res serves for ramp, and Team Up’s a way to make my characters huge (pro tip: remember to use it before using Danger Room!).

And finally, Cosmic Cube serves as churn, so that I can get my Danger Room dice back reliably. And no, I didn’t put Shriek; I wanted to try and play a bit more casually this week.

Up against C Boom Boom, U Morph, Magic Missile, R Cube…yeah, it’s as nasty as it sounds, especially in a casual tourney. My early rolls were rough, and I couldn’t get Bishop until really late in the game, at which point his Boom Boom + Morph combo had brought me down to 2 life. I kept his team at bay as best I could, but eventually he just snuck in the last few points of damage in and won. Side-note: if he had an adventurer to take advantage of that double burst on Magic Missile (e.g. Tabaxi Rogue), this team could be even nastier.

For this game, I was up against an all you can hate buffet of nasty Golden Age control. Jinzo, Hellblazer, Babs, AVX Hulk (with Magic Missile to ping him), Toad…yeesh. It turned very much into Conner Kent swinging for the fences with Danger Room, but Hellblazer slowed Conner so much, that at some point I just bought all of my opponent’s Magic Missile dice, cycled them through with Cosmic Cube, and I eventually burned her down before she could win (but just barely!).

For my final match of the night, I was paired up against all of the weenies. Jubilee, Yuan-ti, etc. Everything was a hard-hitting low-cost, and relatively low toughness. Gold Dragon saved my bacon here. I bought him ASAP, made him free to field with Nick Fury + Danger Room, and went to town. With both dragons cycling through my bag, I managed to set up a big enough swing to win before my opponent could do any serious damage with his strategy.

-C Cosmic Cube is really good at getting dice back, but it really, really hurts in terms of ramp. Because I didn’t end up rolling that many dice at once, it was really hard to get my 4+ cost dice. It’s a cool card, but this team wasn’t the good fit for it.

-Not putting Shriek really hurt me, especially against Morph. I shouldn’t do that if I know my opponents won’t do the same.

-Conner Kent was worth a try, but without a way to spin him up, he’s not that good. Rolling him on his level 1 side is just painful.

-I have a lot of other good villain hate pieces to experiment with; expect R Danger Room to show up again in a few weeks in a new build.

So overall, I still think R Danger Room is worth it in this new meta; there’s just too much it can do. However, this team wasn’t it. Definitely need to work on this concept some more.