Weekend Achievement League, but save for being Modern Legal, the team I was running wasn’t really about Achievements.  It was just something I’d been wanting to try.

If you’ve read many of my previous posts, it won’t come as any suprise to you that I regularly include Uncommon Acererak on my teams for his global.  That card is not on this week’s team.

That’s because one day, on a whim, I asked myself “What do his other cards even do?”.  So I looked at the common, and decided to build a team around it.

The core of the team is these two cards: 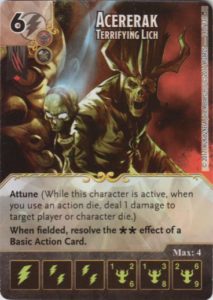 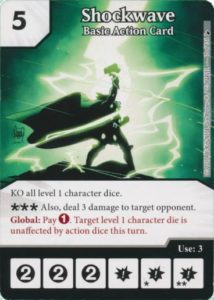 If I remember the rules forum rulings correctly, using the effect of an action die is considered using an action die for things like Attune.  I built the rest of the team to take advantage of that.

First I added the Uncommon Dragonborn Sorcerer,  This is a 4-cost bolt with Attune, whose ability increases the amount of damage dealt by action dice by 1 (to 1 target, which can be a player or character die).  Next came Rare Pseudodragon, a 2 cost mask who lets my characters with Attune deal 2 damage instead of 1 when they use it.

Heimdall was added for his global, so I’d be able to afford the 6-cost Acererak.  Uncommon Scarlet Witch from XFC was added so I could manipulate the level of my characters, particularly Acererak, when fielding them.

Acererak has a ‘when fielded’ ability and a D of 6-8-9.  If he’s in the field, it probably won’t be easy to get him KOed.  Of course, if he’s Level 1 when I use Shockwave he will be KOed, giving me the opportunity to field him again next turn.  The down side of that is I don’t get to use Acererak’s Attune ability that turn.

I added Reclaim as my second BAC so that if I whiffed rolling a character, I might be able to get it back faster.

Rounded out the team with Yuan-Ti Pureblood, for more Attune, and common Adam Warlock.

If I get Adam Warlock in the field with Dragonborn Sorcerer, Pseudodragon and Yuan-Ti Pureblood and field a Level 2 or 3 Acererak, I deal 4 damage from Shockwave and 2 each from the 3 Attune characters, and then I repeat the process.  Yowza.

Green Lantern team with Uncommon Kyle Rayner for discounting.  He was relying on Hal Jordan:  Test Pilot as his heavy hitter.  He bought a variety of lanterns early while I bought the pieces for my combo.  With buffs from Common Lantern Battery and the other Blue and Green Lanterns in the field, Hal Jordan’s A was usually in the double digits.  Fortunately my opponent wasn’t running anything with Overcrush or Unblockable, and I was always able to chump block the one Hal Jordan he got out fairly early.  He managed to buy 3 more Hal Jordan dice, but his Used Pile was pretty full at that point and he never got any of them out before I got my chance.  I managed to field Acererak on consecutive turns, on Level 1 both times, and helped out by a now Unblockable Level 2 Yuan-Ti I had enough to swing for lethal.

X-men team.  SR Multiple Man, OP Flip Wolverine, AvX  Beast, and a few of their friends.  He was running Investigation as one of his BACs and I wound up going first and buying two of the three Investigation dice.  That helped me get all the pieces for my combo out.  That included Adam Warlock, partly because I had trouble landing Acererak on a character face.  My opponent was building up his field, but wasn’t attacking much.  Eventually I landed Acererak while all my other pieces in the field.  I’d already dealt my opponent some Attune damage, so I didn’t actually win the game by dealing 20 non-combat damage in a single go.

Another War of Light team.  The Supergirl with Overcrush looked to be his big gun, but despite buying one of her dice fairly early he never got her out.  He either couldn’t land a character face or he’d roll her on level 3 when he didn’t have the 3 energy to pay her fielding cost.  He’d taken four damage from Attune when I got a Level 2 Acererak out, dealing him 10 damage and KOing four of his Sidekicks.  That left him with only two blockers, not enough to prevent me from getting the 6 damage I needed when I attacked.

Shockwave and common Acererak (or Shockwave and Uncommon Morph) is nuts.  If you’re part of a scene that bans overpowered cards/combos this is something you need to talk about adding to your ban list.  It’s that good.

I mean I thought it would be good, and I wanted to see if it would work like I expected.  It wound up working even better than I had anticipated.

I’d consider taking this team to a high level competitive event (if I were going to any in the near future).  I do have Batgirl on the team as a way of dealing with Shriek, Blob or Madame Masque, but I’d probably swap Adam Warlock for another control piece.  For his cost and how much use I’d likely get out of him, there look to be plenty of other, better options.

The other thing about this week’s team is it led me to a conclusion I’d already been leaning towards:  The TOA designers went overboard with Attune in this set, giving it to too many characters, or at least too many cheap characters.  When you can put 4 different 4 or less cost characters with Attune on one team, that’s too many.

Have you had any great successes with “Off the Beaten Path” cards?  If so, let us know in the comments.