This build was born out of one of those throw away cards I used a couple weeks ago.  I had built a Brotherhood Team for our Affiliation League and basically filled it with every Brotherhood character I could.  One of them was this guy… 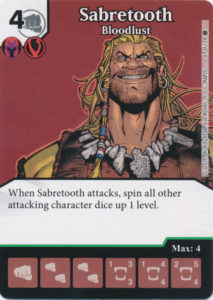 I never really had a chance to use him that day until my last game.  I suddenly realized he would fit really well on a Team that likes to attack.  The first card that immediately came to mind was Red Hood:  Jason Todd.  Todd gets buffed for Attackers and Sabretooth makes him even bigger when they all attack.

The combo was chosen.  Now to find some pieces that will help make it work better.

Take a look to see how the puzzle went together.

So, the basic construction of the Team is to get as many copies of Red Hood out as possible and attack with Sabretooth for a buff and a level-up spin.  Giant Red Hoods will help clear out things or cause some major damage.  Either would work.

Since I was going with an all out attack strategy, I decided to give Hypervelocity another try.  Attacking would not be an issue for me, but maybe it will mess with my opponents strategy.  To pair with this action, I added in Malekith for the Global.  A 5 cost action is tough to get, but Malekith makes it a little easier along with some ramp.  The elf would help me get it, but to make better use of it I went to the Golden Age and brought in Captain Cold.  Cold has some decent stats, but I liked him because my opponent had to pay 1 energy in order to declare an attack.  Not a big price to pay, but if I could mess with the economy, I would be happy.  Also, there are always those games that you forget to keep that one energy behind and may prevent an alpha strike.

So far, so good.  The one big thing that I have noticed so far is my Team has some brutal fielding costs.  Nick Fury to the rescue!  As long as there is an opposing Villain, I would be paying nothing.  Well, what happens if there are no Villains?  The Lantern Power Ring Global fixes that.  For the cost of 1 mask, I can field anything.  Not bad at all.

With just a few slots left, I needed some ways to deal with those nuisance characters.  Since I had Malekith on already, I added in Doop to take something annoying off the board for a while.  They pair well, so why not.  The final piece was Billy Club.  The Global was to help with fielding in the case where I whiffed on rolling a mask, but also if my opponent chose to use it to pay the Cold Tax.  That would be one less blocker to deal with if they used it.  Also, the action itself is not too shabby.  The final BAC that I added was Released From The Ice.  I have had a chance to see it used a bunch in the Online Thor Draft and wanted to take it out for a spin and see how it worked.

Robin: Reckoning was the big problem here.  Unblockable damage that returns back to the Field.  This Team was actually built to make use of Batmobile, jus tot show it was possible.  Every character had either Batman or Robin in the Title or Subtitle.  I was impressed, but Batmobile is still a terrible card.  Full disclosure:  We messed this game up pretty bad.  We both thought Batmobile discounted multiple dice and fielding costs, but it is only the first one.  We also forgot that Robin is still unblockable with Batman on the Field.  He was playing it that he needed the 4 Bat-Family characters to bring him back.  He would have had me easily if he remembered the first part of the ability has nothing to do with the second.  I did get to make decent use of my Cold Tax engine to prevent some attacks when he forgot to save the one energy.  Eventually, my buffed Hoods along with spinning up my entire field was enough to swing in for lethal.  Technically a win, but I shouldn’t have won this one if we had remembered how Robin worked.

Prep Burn damage with Tabaxi Rogue and Parademons.  He admitted to making a building error when I asked why he didn’t put Hogun on his Team instead of Fandral.  He grabbed the wrong Warrior.  He was going to burn me to death, so I needed to punch him to death.  This game, I got out Nick early and rushed my way to 4 Red Hoods and a Sabretooth.  The Hoods were up to level 3 very quickly and that managed to keep his Field thin.  I swung in one turn for 17 damage and failed at the maths when I had more than enough to get lethal.  Lucky for me he couldn’t do much on his turn and I was able to get the remainder of the damage in.

A very cool Knowhere Team that was using Baron Zemo to bring in lots of different What-If’s and White Lanterns.  This was a game of the dice gods not allowing my opponent to roll.  He didn’t get much of a Field at all and I was able to build up to lethal with one Hood, one Cat, and some other stuff.  I know this Team works better than that, so we played a second game for fun.  This time, the gods laughed at me and I struggled to build a Field at all.  His shenanigans worked well and I took a Punisher and Colossus to the face.

Sabretooth and Red Hood worked as well as I expected.  Hypervelocity and Captain Cold were also a fun combination to use.  Nick Fury and the Power Ring were the saving grace of this Team.  Without them, I would have had major issues fielding what I brought.  Here’s hoping we get some Global based Villain makers down the road.

Doop was decent, but I didn’t use him as much as I should have.  He proved more useful as a big body than as a tool to capture.  Maybe on another build I can make better use of this guy.

Billy Club was used once as an action to remove a pesky Robin, but otherwise functioned as you would expect.

Let’s talk about Released From The Ice for a minute.  I admit that I overlooked this card when Thor first came out.  That was a mistake.  This is a cheap action that lets you Prep whatever you want (assuming it is in the Used Pile).  It proved extremely effective tonight as I could get my Hoods over to Prep quickly.  It is an action that I would recommend you play around with if you have not already.

Overall a fun Team to play around with.  Definitely some holes in this build, and I am not sure it could run with the big fish in the competitive scene… but a decent casual Team none the less.  Sabretooth gives instant buffs to your low level attackers and pairs will with an Aggro type Team.  I would love to try him, Hood, and Guy on the same Team and see what happens.

Have you played around with Sabretooth and/or Red Hood?  How did you build your machine?  What would you have done differently?  We would love to hear from you in the comments below!