It was another regular, unlimited constructed at our FLGS.

Canada’s a big country, and for the members of our local scene the Canadian Nationals are simply too far away for us to be able to make the trip.  So a lot of the brewing in these parts recently has been focused on the newest stuff – the X-Men Forever campaign box and the X-Force and Dark X-Men team packs. 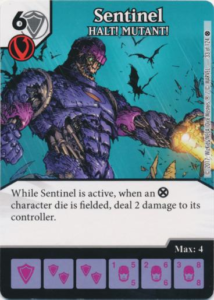 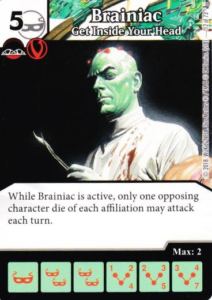 The first’s ability is useless if you aren’t playing against X-Men, and the second’s is only useful if your playing a team that only includes one or two affiliations.  But hey, that’s been fairly common in our local scene since the X-Men campaign box came out.  So, no time like the present to give it a whirl.

Of course, neither of those cards really qualifies as a win condition, so I needed to include one of those in my other 8 slots (that includes the 2 BACs).

I decided to go with the board wipe route this week, mostly because it was something I hadn’t done in a while.  Specifically I opted to go with Seething Corruption and Grey Hunter. 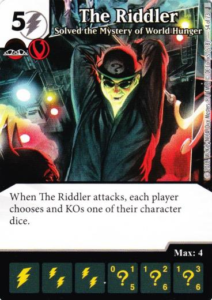 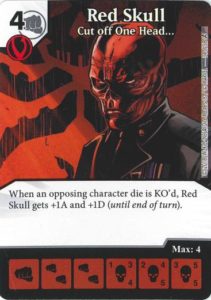 Misdirection went in as my other BAC, because the fielding costs on Sentinel, Red Skull and Brainiac are fairly ugly, and Bishop and Grey Hunter aren’t a whole lot better.  An alternative method to getting some of these characters on the field without paying gruesome fielding costs might be very useful.

This was something of an experimental team for me – five of the eight character cards were ones I’d never used before.

It turned out to be a very thin field tonight – only 3 players.  So I only got two games in.

I began the night matched up against our group’s resident youngster – who was running a pure X-Men team with characters from the X-Men Forever campaign box.  Pretty much the type of team my own team was designed to chew up and spit out.

It took me a while to set up the big finish, but since I got Brainiac out early, her ability to go on the offensive was badly hobbled for most of the game.

She did some burn damage with one of the new Jubilees, but I managed to avoid KO’ing it before I got Bishop and Sentinel out.  She was running the Professor X which gives life gain when Sidekicks are KO’d (yes, she bought and fielded Professor X) which mitigated some of the damage she was taking from fielding X-Men.  Then she KO’d Sentinel with a Too Big To Fly action die, and I couldn’t get the character face on Sentinel on my next turn.

Still, a turn or two later I got the Rube Goldberg machine to fire.  Activate Seething Corruption, attack with Riddler, KO Grey Hunter, deal 1 damage to all opposing character dice,   That wiped his field, and gave my Level 3 Red Skull +7/+7 from the 7 opposing characters that were KO’d.  Among the other attackers was a Kree Captain who was +4/+4 himself.

As the turnout was only 3 for tonight, I basically got to be an observer as the X-Men team played against a Scorching Ray/Venerable Dreadnaught team who was running a 9-cost Stompa.  He actually managed to buy both dice he had on the Stompa card.

Almost all of the damage in this game (both ways) was from Scorching Ray.  The other adult was running Polaris: Strange Stirrings Within which allowed him to use a copy of Scorching Ray whenever his opponent did.

He pulled a Stompa once that way, and after some pulls of Sidekicks and some low (but non-zero) cost characters, he pulled another Stompa with his own action die.  That ended the game.

NOTE:  When I asked the youngster which of the two teams she’d faced was meaner, she said the other guy’s.  Scorching Ray-Stompa is apparently worse than an explicitly anti-X-Man team.

Mr. Stompa/Scorching Ray/Venerable Dreadnaught admitted to me after the game that his real goal on the night was simply to pull Stompa with Scorching Ray (preferably more than once).  He didn’t manage to buy any Stompa dice against me, but the game still wasn’t much fun from my end.

He got Sage out early, as well as Shriek (blanking Grey Hunter).  I’d bought two Seething Corruption dice quite early, because I was well aware that said action offered great synergy with Venerable Dreadnaught.

And then with the action itself of little use me, those dice stubbornly came up on the action face on what seemed like 90% of the rolls for the game.  On turns where I drew one, it felt like it remained on an (unwanted) action face about three turns out of four.

I needed some character dice to put up a wall of some kind, given the one he was putting up.  Fortunately, given the Sage tax, the fielding costs for Black Manta, Kree Captain, and The Riddler are reasonable.

We feel into a bit of pattern where he’d punch out Bishop with Range damage, then use Scorching Ray on the turns where he drew said action.  He was wearing me down, but it was slow going.

Eventually he noticed the Seething Corruption Basic Action Card, and that the last die was still on it available for purchase.  I’d never had the energy and the stomach at the same time to purchase it, given how the miserable rolls on the first two dice had been choking me in the early game.

It took him a while to draw it after his bag refill, but I didn’t discover any magic solutions before that happened, so he rolled it, used it and dealt me the coup de grace.

This was a fun team to run once.  Sentinel and Brainiac are not always going to be useful, but now might be the time if everybody else in your group is besotted with Hope Summers and Cyclops and Jubilee and . . . you get the idea.

The point is both Sentinel and Brainiac are very situational cards.  They’re only useful when a sizable percentage of your regular opponents have started to get, shall we say, a little too predictable.  Be careful not to overdo it and become the predictable one yourself.

Of course the win condition combo of Riddler-Grey Hunter-Seething Corruption is separate from Brainiac and Sentinel.  Red Skull proved useful with that combo, but I don’t think he’s essential.  I wouldn’t necessarily remove Red Skull from the team, but I’d give serious thought to other options with lower fielding or purchase costs.

Bishop was very useful.  These days Bishop is almost an auto-include on all my teams given how burn damage has become so prevalent.

I got a lot of use out of the Kree Captain global, especially in the first game.

Are there any ‘situational’ cards you’ve wanted to try, but never thought the time was right to put them on one of your teams?  Tell us about them in the comments.