The event was a standard Golden Age Constructed event.  The new DC Campaign Box and Team Packs had arrived at the store the day of the event.  Some players cracked open their copies to start using the new cards right away, while others stuck with teams they had put together without any of the new stuff.  I was one of the latter.

In one sense, this team is about Superman using his heat vision to beat down his (i.e. my) opponents.  That’s unusually specific for Dice Masters, where the ‘combat’ is much more generalized than something like Heroclix, but when the team is intended to work by using the Scorching Ray Basic Action to draw Superman dice – well, how can you not make the heat vision connection? 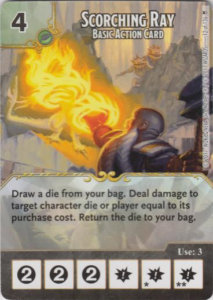 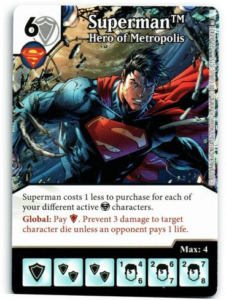 Of course, there’s more to the team than those two cards.  The first addition was Jimmy Olsen – get him active and Superman’s effective purchase cost is cut in half.  Get my first Superman die active with Jimmy and I can buy my other Superman dice for 2.

Getting those characters active quickly was a priority, so Rip Hunter’s Chalkboard went on the team. 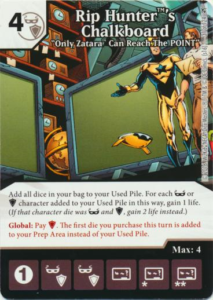 It went on the team primarily for the global, but since the ability involves drawing all the dice in my bag, actually buying the dice was a contingency plan.

Rare Clay Golem went on the team for multiple reasons.  Fabricate would give me a means to KO my Superman dice to refield them – with 6D on Level 1, they’re a little too beefy to rely on combat damage to get the job done.  The other was that they buff the D of other active characters, which would increase the staying power of any Sidekicks I fielded to thin my bag.him

Common Rip Hunter went on the team because his ability would allow me to fine tune how many dice I drew on a given turn, which should make it easier to get the empty bags I’d be looking for.

Create Food and Water was chosen as the second BAC for both the global and the action.  The action, if I resorted to it, should hopefully clear multiple Sidekick dice out of my bag, and the global would potentially clear one more.  That would mean if I did have a Scorching Ray to use, the odds I’d pull something that would at least do some damage would improve considerably.

Mister Miracle went on the team to give my action dice, particularly my Scorching Rays boomerang.

Shriek was on the team primarily as an anti-Tabaxi measure.  As I mentioned last week I’ve seen entirely too much of Tabaxi Rogue the last couple of months, and I wanted a counter.  Shriek, of course, counters any 1 character I choose .  Basically, if I saw a Tabaxi Rogue, out came Shriek.  Otherwise, I was going to stick to the plan and try to win without buying Shriek

There may have been a design flaw with this team.  The question is if I have Jimmy and Superman active, and I use Scorching Ray to draw a Superman die, how much damage does it do?  When I was putting the team together I was under the impression the answer to that question was ‘6’.

My Game 1 opponent felt differently, thinking if I could purchase Superman for 2 energy (given the existing board state), his purchase cost was ‘2’.  I don’t really think that’s correct, but I accepted that for the night, and played it that way.  I will discuss this further in the post-mortem.

My opponent hadn’t fully understood how Instant War worked when he put the team together.  It has both players draw multiple dice, but they are not rolled.  The Spot only has a player draw (and roll) extra dice for dice that are drawn and rolled.  So his plan to have his Mr. Mxyzptlk turn one of his opponent’s dice into a Spot, then use Instant War to force the opponent to draw 6 dice and take 6 damage from Tabaxi Rogue was a non-starter.

His backup plan wasn’t much better.  He had the new Martian Manhunter which gives his character dice Overcrush on his team (if his opponent has a Villain active), but everybody else on his team had low A.

He used Instant War and Tabaxi to deal me 3 damage early on, but I got Shriek out shortly after that, which pretty much neutralized the only viable weapon he had.  On top of which, the three Sidekicks this put into my Field Zone stayed there for the rest of the game, thinning my bag, and simplifying the use of Scorching Ray.

Anyhow, I got Mister Miracle out, bought a couple of Scorching Rays and started burning him down.  My success rate on the Boomerang rolls allowed by Mister Miracle verged on the absurd – I was something like 4 for 5 on the game.

It didn’t work exactly as envisioned – I bought Rip Hunter, but for various reasons never fielded him.

At one point, I had two Scorching Ray dice on Action faces, with a bag containing two Superman dice, one Rip Hunter die, and one Sidekick die.  I pulled the Rip Hunter die with both Scorching Rays.  Which was the best result I could hope for given the rules confusion.

Given my flawed build and Lady Luck clearly favoring me this game, it wasn’t much of a contest.  He did manage to buy my last Scorching Ray and burn me for 4 with it, but that was about all he could muster.

A bunch of new cards on this team.  Superman with the new Strike keyword.  Parasite that allows you to had his A and D to one of your other dice in lieu of attacking.  Not to the mention the Clayface with the absurd global.  We both made good use of said global, but we didn’t come close to exploiting it the way Laurier told us about in his Mudslide article.

Burned him for 6 early.  KOed Jimmy and a Supes to fabricate a Clay Golem, primarily so neither would be active when I used Scorching Ray.

He got Superman, Hawkman and Parasite in his field and kept bashing away at me.  Between the D buff from Clay Golem, and some timely use of the global on the Superman card he was getting very little actual damage through, even with the Overcrush from Strike (which was only on fielding turns, and there were few of those, because I wasn’t knocking his Supes out if I could help it.)

I got a lot of stuff KOed on his turns, but I always managed to reroll Jimmy on a character face, which made it fairly simple to field any Superman dice I had in my Reserve Pool.

We went to time with me ahead on life, mostly due to the 6-point Scorching Ray burn early in the game.  He had his final turn first and did enough damage to even up our life totals.

That left my final turn.  My field was empty after his final attack, with 4 characters in his Field Zone.  I rolled 5 characters in my Roll and Reroll Step, with enough energy to field them all, giving me the win.

This was against Jourdo’s Mjolnir Clubbing team.  Once I realized what he was up to, I abandoned my burn strategy, and decided to buy and field as many Superman dice as I could as fast as I could.  It wasn’t fast enough.

On what (unsurpringly) turned out to be my final turn, I used a Cake die when I had five Sidekick dice (and nothing else) in my bag.  Then I KOed a Jimmy and a Supes to Fabricate a Clay Golem.  He hit me with multiple Mjolnirs to finish me off on my next turn,  KOing two or three more of my characters in the process

If I’d survived to start another turn, I would have started it with eleven dice in my Prep Area.  Just for laughs, we decided to see what I would have done with all those dice if I’d gotten that turn.  I ended up fielding a Level 2 Jimmy Olsen, 4 Superman dice (1 x L1, 1 x L2, 2 x L3), 4 Sidekick dice and a Level 3 Clay Golem.  Oh, well – I don’t think ‘Too Little’ applies in this case, but is was certainly ‘Too Late’.

This is not going to be a meta team.  It’s slow and finicky.  On multiple occasions, I declined to field characters to send them to the Used Pile at the end of the Main Step.  After that came sending those dice to the bag with the Groot global and then pulling them with Scorching Ray for damage, usually ‘6’ as it was a Superman die on each occasion.

My first round opponent is the only person I spoke to who genuinely seems to think the damage for pulling Supes with Scorching Ray is reduced if Jimmy Olsen and/or Superman is active, but I do have to admit the wording on the cards in question is ambiguous – Superman (dice) cost(s) 1(2) less to purchase – which is arguably a cost reduction as opposed to the ability to make purchases at a discount.

I was using Fabricate to KO Jimmy (and Supes) before I used Scorching Ray to get max damage – not part of the original plan, but an easy enough revision to make once I’d had the issue pointed out to me.

Is it?  Not really, at least not in high-level events.  There’s too much setup involved before you can really go to town with it.

Still, I enjoyed conducting the test.  Some days I’m just in the mood to play a teams that’s more bells-and-whistles.  Something where the ‘operating manual’ isn’t simple and straightforward, that’s a little more of a challenge to run.  This was one of those days.

What are some of the cards you find the most fun to use?  Let us know in the comments.