Is the theme song going through your head?  Good.

This one started out due to a random comment from one of the players at our local store.  We were joking how the Black Panther dice kind of looked a little on the pink side.  From there, I was determined to make a Pink Panther themed Team.  Seeing as Black Panther was going to be the centrepiece, I decided to look at this one. 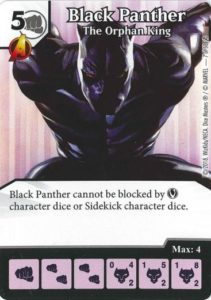 Yeah, he is a bit of a bigger cost character… and there are other unblockable characters that may be more efficient, but I wanted to focus on this guy and this version seemed to be one of the better choices.  Looking at the ability, the obvious combo was going to reach back into the Golden Age. 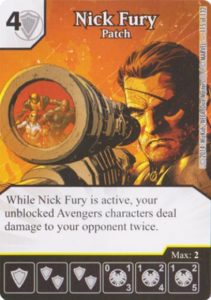 Good old Patch would be a decent partner for this kitty cat.  Panther is already an Avenger and as long as he is up against Villains, he will be unblockable and quite possibly a OTK.  If only there was a way to guarantee that I would be playing against Villains with 100% certainty.  Enter the Rare Danger Room.

So, the core combo is set.  Get Patch and Panther out and swing when the Field is full of Villains.  Pump up Panther as necessary to murder with unblockable damage.

The Team:  Revenge of the Pink Panther.

So, the core is pretty obvious.  The rest will just be accessory pieces and new toys that I just wanted to play with.  The first addition was one of my favourite new cards, the Avengers ID Card.  This served a few purposes:  1.  Anything that goes unblocked while Fury is active can become an Avenger and double their damage, and 2.  When I use Danger Room while Panther is already in the Field I need a way to give him his Affiliation back.  Also, the buff is not terrible and adds to the core nicely.

The next piece I added was the Kree Captain.  His Global gave a discount option for Black Panther and his Villain buff would work well with this Team.  It never hurts to have a potentially big beefy character around.

Arnim Zola was the next choice, as I had a feeling Thanos would be snooping around tonight.  He is an excellent counter to Overcrush, and a cheap source of Bolts for Danger Room.  I decided to add some other new cards to the mix for some control/burn options.  Deadshot was put in to clear the field of tiny walls and could be KO’ed at will with the Danger Room Global.  Poison Ivy was an interested add to pair with Deadshot for some burn damage in the right situation.

Speedy Delivery was there solely for the buff Global.  Thrown Brick was included because I wanted to try it out as a Ramp engine and many of my characters had higher defensive stats.

With that all said, let’s put it to the test.

I was up against a Black Manta/Hush Retaliation Damage, with a Nobby for good measure.  I wouldn’t even need to purchase Danger Room here.  Everything was already a Villain.  He made one mistake in this Team build.  He forgot the Bat character to KO Hush and had to rely on the BEWD Global, which slowed him down drastically.  I got Nick out early and snuck some Avengers affiliated Sidekicks through where possible until I got to Black Panther.  He rolled on Level 1 and I had to buff him with Bolts, but I hit for lethal.  I bought one Kree Captain here and he helped wear down my opponent prior to the Panther strike.

Overcrush City.  UC Grodd, the double Overcrush Thanos, and worst of all Blink In Betweener.  Hello Arnim!  I purchased him and Kree Captains as quick as possible.  With all the Villains out there, the Captains were buffed at one point to +13/+13.  Arnim kept the Overcrush damage to a minimum due to his ability.  Because of the change in strategy, it took a long time to get to Nick… and I never got to the Panther.  We were at a stalemate for most of the game.  His Blink cleared out all of my Kree a few times, but I got lucky and they kept coming right back.  I took an Overcrush swing as time was called and could not push through enough damage to come back.  He won on life points.

Thunderbolt Attune here with Techno and Mach-1, along with a nice unblockable Ant-Man.  I actually had both Fury and Panther purchased early and they were both in the bag when his Field was clear.  Unfortunately, they would not come out together for a while.  I attacked as often as I could, but with the lack of Villains, it was trickier to get the damage through.  I just kept the Field thin where possible.  It turns out Attune is much faster than my combat damage strategy.  Some early scares were not enough to get the win.

I would say that this Team was an interesting test of some different tech pieces.  Avengers ID Card and Patch are a match made in heaven.  While Black Panther was fun to play around with, there are so many better characters that could be used in his place.  Yuan-Ti and AVX Angel immediately come to mind.  Panther’s stats are tough to beat though, so he was still a decent choice.

Arnim Zola proved to be a lifesaver against an Overcrush Team.  If that is part of your meta, I highly recommend putting him on your Teams.  Thrown Brick proved to be interesting, but I honestly did not get as much practice with it as I would have hoped.  Maybe another go with it is necessary.

I did use Deadshot sparingly, but most of the defensive values I was up against were greater than 1.  He was not as effective as I had hoped, but I still think he has a good ability.  Although I did not purchase her once, I think this Poison Ivy can pair well with Deadshot on the right Team.  I will have to look at this combo for another Team.

Let’s talk about the Kree Captain for a sec.  Holy crap he gets big fast… and he is a 3 drop.  I can see this guy getting a lot of play,  especially with Danger Room available.  He could be a beast for very little investment.  He was not the original core to this Team, but proved to be one of the more interesting pieces.  Seeing how he played, I might have been better to swap out Speedy Delivery for something like Raised Shields to have access to both a buff and Overcrush.  This guy will definitely be seeing more play from me.  Loved him.

Overall, this was a fun Team to play with and let me try out some interesting tech with the newer cards.  While not a fully cohesive Team by any stretch, I think there are pieces that will work well together for other builds. 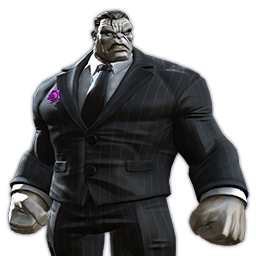 Just a reminder that our Mr. Fixit Challenge is set to run this coming Saturday (August 25).  Check out the article information for detail and Team submission links.

Looking forward to seeing what you can come up with for Mr. Fixit… Hint:  This article might contain some decent tools to use.

Hope to see you on Saturday!

2 Replies to “Revenge of the Pink Panther”