I have received a lot of positive feedback from the Avengers Infinity Gauntlet analysis.   After I was able to speak to Matt at DM-North, he had a draft pack box from Tomb of annihilation and we wanted to check a couple of the questions i had proposed in my latest article.

Or course if you have not seen the first article, please click here to review.

The questions to be checked in this analysis were:

Matt and I, opened up a full TOA feed in this video below:

(Please let us know what you thought of the format we used, as we will be using this format if we ever get the chance to un-box and preview any further cards going forward)

We did not go over the cards in the set, as they were previously spoiled and the cards are about to be rotated out by Wizkids rulings. (We almost Rip a Green Devil Mask card in the video, but somebody not named Reg didn’t have a foil version of the card…)

I wanted to do a little further analysis and compare the data pulled from the AIG and the TOA boxes.

Are the cards in the set, Alphabetical?

After opening 8 boxes, the answer to this is YES!
We started opening the boxes and we knew this was true about box 3.  Starting with Basic actions, then the commons they are listed from A-Z from the front of the pack. From this, I can only assume that there is some sort of distribution at Wizkids that either verifies that cards are preset for each Feed, and there was instances were previous Draft Boxes contained exactly the same cards… While the individual boxes might differ, the overall card pulls might just be the same. Of note, one of the boxes, we pulled 6 Pseudodragon dice. We actually  comment in the video that we had zero Psedodragon dice so far, and then we pulled the Common, Uncommon, and Rare in the same pack!

The Arrangement of Rarities in the Boxes.

From opening the TOA boxes, we found the same distributions over the 8 boxes. While you have more Rare characters starting in the AIG set, This looks like the same going forward. This is bad news for collectors, and I will cover this information in the Rare section below.

On a good news point going forward in packs is I know in the Avengers Gauntlet they will have an extra Basic Action Card in the packs to choose from. (Excellent news when playing drafts to have that extra BAC option, and much appreciated Wizkids!)

In Comparing the two box openings and looking at the Basic Action pulls, I found the following information.
The TOA opening, netted us 10 of the 12 available cards (83%), and AIG was 15 of 16 (93%). This is an obvious change in chance as while there are 4 more cards to be pulled in the newer sets, we are given 3 per pack (instead of the 2) and more likely to get ourselves all the cards.  It was odd that we pulled 6 doubles in the TOA packs, which would lead me to believing there was not a set distribution for each box set, as most likely we would have pulled all available cards.

There were only 2 foils in the whole box, and the odds of pulling a foil in a pack are 1 in 4 (25%) It is worthy to note that for both of the foils pulled in the video, we also pulled a non-foil version.

In regards to basic action cards, I believe this is great news going forward, as hopefully the distribution is better, and from one box you can hope you will get most or almost all of the BACs for the set.

In Comparing the two box openings and looking at the Common Card pulls, I found the following information.
The TOA opening, netted us 53 Common cards (55% of the total cards pulled), and AIG was 50 commons (52% of total cards pulled). This is most likely due to the fact that there are more Rare cards in the AIG set, and the distribution would allow for less Commons to be put into a full draft box. The Numbers are almost on par, and pulling 6 to 7 commons each box would be the expected value. The odds of pulling a Foil common is similar in both openings, at 62.5% (5 out of 8 boxes)

This is good news going forward, as hopefully the distribution is better, and from one box you can hope you will get all the commons for the set, and thus granting you at least 2 dice for each. I also noted in some of the dice bags, the dice were not side by side, and I would like to think they were hand filled, and thus could be susceptible to human error in a box. 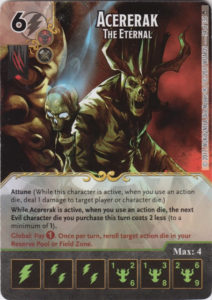 In Comparing the two box openings and looking at the Uncommon Card pulls, I found the following information.
The TOA opening, netted us 27 of Uncommon cards (28% of the total cards pulled), and AIG was 28 Uncommons (29% of the total cards pulled). Again, like the Commons the Numbers are almost on par, and pulling 3 to 4 Uncommons in each box would be the expected value. The odds of pulling a Foil Uncommon had different results as in TOA we pulled 8 Foils (1 Uncommon foil in each box), while in AIG we pulled 4 (One in every other box). Interesting, and would need more stats to confirm if any distribution of the foils were changed since TOA boxes.

One note, in the AIG, and TOA box pulls, we received the same percentage of unique Uncommon character cards. (62% – 25 of 40 available Uncommons)

I would assume this is the same distribution that they used in the past.

For Collectors, most likely you would get most of the Uncommons with 2 boxes, and would have lots to trade to get the remaining cards you do not pull from 2. 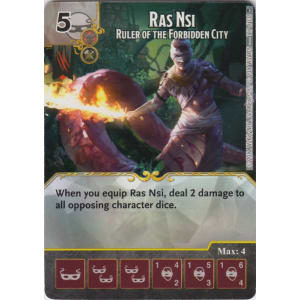 In Comparing the two box openings and looking at the Rare Card pulls, I found the following information.
The TOA opening, netted us 15 Rare cards (16% of the total cards pulled), and AIG was also 15, but the percentage of available Rares cards pulled was actually higher (47% compared to 38% in AIG). While like the Commons and Uncommons that the numbers were on par, and you can be expected to pull 2 Rares in each box, you need to remember that starting in AIG, there are 40 Rares instead of the 32 that were in TOA. This is due to Wizkids making a extra rare card, instead of having the Super Rare replace the Rare versions of a character. The odds of pulling a Foil Rare had different results as in TOA we pulled 4 Foils (1 Rare foil in every other box – 50%), while in AIG we pulled 6 out of the 8 boxes (75% of the boxes). Maybe this would also need more stats to confirm if any distribution of the Rares foils were changed since TOA boxes.

One note, We pulled zero doubles in the TOA, and only 1 double in the AIG boxes.

For Collectors, I would be guessing that 4 Full AIG Draft Boxes (32 Draft Packs) will net you all the Rares in the AIG set. You would have doubles to trade, and the trade market might only require you 3 boxes. 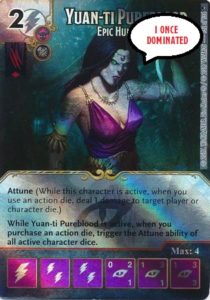 Of Note, Was there only 3 Super Rares in the video Jimmy showed? Wasn’t there supposed to be 4?? (Please comment down below if you saw something I didn’t…)

Of note while the rarity distribution looks different from TOA and AIG, the numbers were 20 Foils in both. This looks like 20 is the magic number for a Draft box, and on average you can find 2.5 Foils in each pack you open going forward but what Rarity I cannot determine from these samples.

For Collectors trying to collect all the foils, I wish you luck like you have had in the past, as I would assume to buy you would require 10+ Full Draft Boxes (80 Draft Packs) to have a chance to pull them all yourself, and you are looking at the same buyers market you probably did previously.

While in the video, Matt and I predicted we were going to pull 8 Pirate cards, we never pulled more than 4 of any one character. The AIG video had one character (Black Panther) that had 5 cards pulled. I believe you can be safe to say you will not get more than 10 dice from one box, and either way you will have spares to share…
Another interesting stat, is that in both box openings, we had 9 characters that only had 1 unique card pulled, and thus 9 characters we would only have 2 dice for out of the Max 4.
There were 6 characters that had 8+ dice in both sets, and it would make me believe that we can assume this similar distribution where you can just hope that the 9 characters you pull only 2 dice for are 4+ cost characters and not a Chwinga, like we did in TOA.

For Collectors, Buying 2 boxes will most likely net you all the dice you will need for Max dice.

We also, did not pull any triplicates of any character card in either of the videos. While this can be assumed to be true, it would require further data to support, but it go with the theme that the distribution is not done via just Random cards being selected for each pack.

Thanks for reading, and please let me know what you think of this article and if you would like to see more of its type.