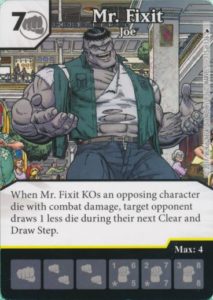 Rare Mr. Fixit is a card that has always intrigued me.  The idea of limiting my Opponent’s ability to draw dice during their Clear and Draw Step is just too good not to experiment with.

So, the goal of the night is simple… Have a turn where my Opponent draws no dice AND ideally rolls no dice during their Turn.  To make that happen, I have to KO four characters with Mr. Fixit with combat damage.  That means he needs to be blocked by at least four characters to trigger this. 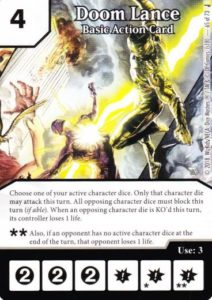 One option to accomplish this goal would be to include an old school force block Global, but I wanted to keep this Modern.  I actually chose to dip my toe back into the Doom Lance pool for this build.  This was actually thanks to a suggestion from our local Edmontonian (whom we love even though he is from Edmonton).  Now, I play Doom Lance on Fixit and KO four things and part one of my plan is accomplished. 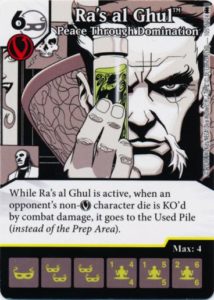 The problem remains as to how do I prevent my Opponent from rolling those dice that I have now KO’ed?  This is where I turned to Ra’s al Ghul.  His ability will pair very nicely with Fixit.  If I have Ra’s active when I pull off my Fixit/Doom Lance shenanigans, I have a good chance of pulling off the second part of my goal… as long as the dice I KO’ed with Fixit are non-Villains.

That is the core to the whole combo.  Let’s see If I can pull it off limiting myself to Modern.

The Team:  Pass Your Turn.

The core to my Team is expensive, so I need all of the Ramp options.  For that reason, I included Rez (Resurrection) and Fez (Atlas) for their Global Abilities. I also threw on Batiri Battle Stacks for the Swarm option.  Toss in a Kree Captain Global and I should have full access to the tools that I need in order to buy my 6 and 7 costs.

Those choices have eaten up a lot of slots for my Team.  The remaining slots would have to give me a little flexibility.

Poison Ivy was included as a backup/removal option to pair with Doom Lance.  There would be the possibility of needing to remove things from my Opponent’s Field, and this gives me a good option to do that.

Hulk was put on mainly for the Global Ability.  On the off chance that Fixit does not have enough attack to achieve my goal, this allows me to buff him as needed.

The final slot went o Beast Boy.  I will fully admit right now that this was an error.  I like his ability to remove things from Prep but realized too late that he really doesn’t help when Doom Lance fires off.  I didn’t have time to change the Team and had to live with my mistake.

I’ve got a bit of a slow build here, but the shenanigan potential is high.  Let’s see if the combo can fire.

The first game of the night was against a Doppelganger/Obelisk Team powered by old school PXG.  Ramp was not an issue here.  Rolling Fixit was.  I chose to use Beast Boy to mess with his Prep a little bit, but with the low cost Morphing Jars powering his engine it didn’t make much of a difference.  I took two level 3 Obelisks to the face before I was even remotely ready.  He went wider than I could and got me before I could make any headway.

Bat Family where gigantic Robins with Parasite powered Overcrush would be on the menu.  He brought Thrown Brick as his Ramp engine, so I dipped into that and managed to get all three.  He also had Misdirection (which was on my short list of actions to include my Team), which I thought would help get things out easier… which it did.  His field was getting wide with scary Robins, so I had to resort to the Poison Ivy/Doom Lance option to remove them.  Fixit triggered once or twice n this game, but really did not make a significant splash.  At most I prevented my Opponent from drawing one die… maybe two, but he had stuff in Prep to make up for the shortfall.  Ivy ended up doing most of the heavy lifting in this one when paired with Doom Lance.

Technically a win, but it was still a failure in that I didn’t achieve my goal.  Maybe it is not possible.

One more kick at the can here.  The final game of the evening was up against an Orbital Strike Team using Improvised Weapon as his Ramp engine and… Iron Will???  Well, that is going to be a pain in my rear.  I decided to take two of the Weapons to try and maximize any Ramp I could.  Pairing that with pretty regular Rez/Fez got me to Fixit and Ra’s al Ghul fairly quick.  Once they hit the Field, I loaded up on Doom Lance dice.  The miracle turn came when Doom Lance rolled and he had some small (non-Villain) stuff in the Field and I triggered the combo.  I played Doom Lance on Fixit.  KO’ed four (actually 5 dice I think) of his dice with a large Fixit.  The Demon sent those dice to Used instead of Prep.  After I passed the turn, he proceeded to roll exactly zero dice on his turn.  He called me an a*****e (which was well deserved), and he was more or less locked out for the remainder of the game.  Ivy would deal with Steel and his Iron Will, while Fixit would take care of most everything else.  As long as Ra’s was around, his dice were going to Used when KO’ed with the combat damage.

It took some time for the stars to align, but they eventually did.  Thank you Quade for being a good sport when I did something really horrible to you.

The combo is super slow to set up with only Modern tools available.  Using something like the OG PXG would definitely help.  Ramp and discounts are rally the keys here.  Anything to help you get what you want easier was a god addition.

Ivy (and really any Deadly character) was great removal with Doom Lance.  This is really nothing new.  There were just not many slots open for removal on this build, that it made sense to use this mechanic.  I never really wanted to ever win with this combo, as it was not the point of the build.

As I mentioned right at the start, Beast Boy was the odd man out here.  I messed up on the timing of his ability when putting the Team together.  My original intent was to use his ability to help clear out the Prep Area when Fixit was doing his thing.  However, I forgot Doom Lance limits you to one Attacker.  I realized my mistake while on the way to the store event and it was too late to change.

I won’t really dive much deeper into the build as everything made it easier to grab the big parts.  Once they were in place, things became more difficult to deal with.

I may need to play around with Ra’s on a different build, as putting things in Used instead of Prep is devastating to your Opponent’s flow.

Now, the big question is would I play this again?  Hell no!  When I did get it to fire, it was funny… but it was not fun to play against.  I am glad to see that the theory works in practice, but I would not bring this one out ever again.

So, what do you think?  How could you make this more efficient?  What have you done with Rare Fixit to limit your Opponent’s rolls?  Let us know in the comments below.