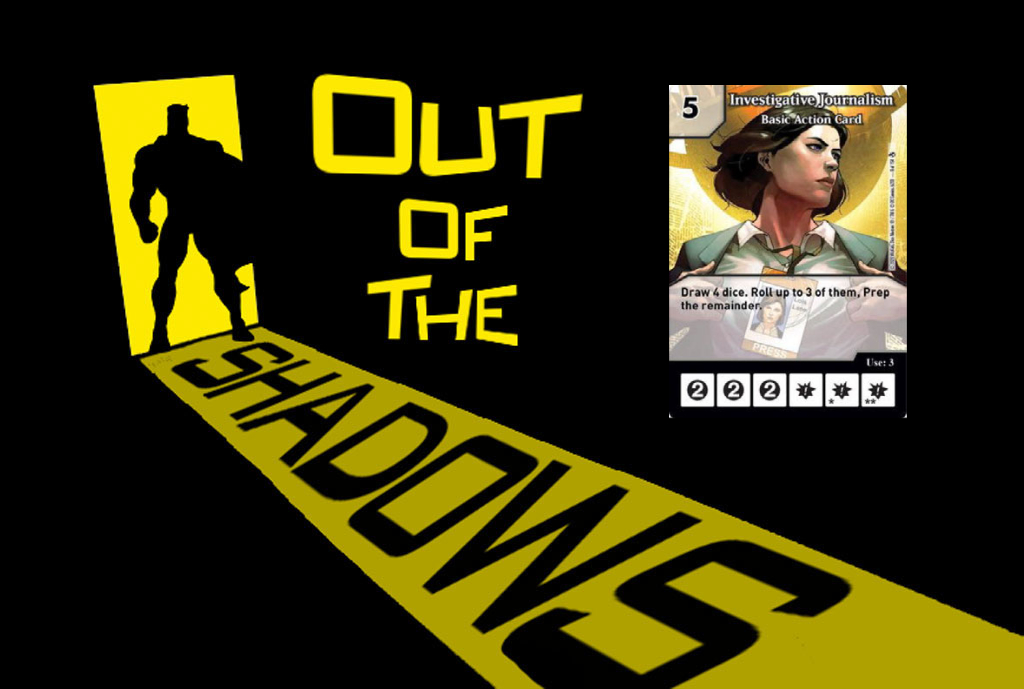 Welcome back to Out of the Shadows…a series of articles highlighting fun, helpful cards that may not be getting a lot of attention.  They might be meta-worthy, or they might not be, but they are definitely worth looking at for casual play.  Today, we look at…

Guess what?  I bought it.

Now I put it on most of my teams.

Best five energy I’ve ever spent in a game (ok, maybe not, but it’s really good.)

This card gives you OPTIONS, and flexibility, and all the ramp and churn you could want in a single die.  You can roll “up to” three dice – which means you can roll 0 and prep all 4, or you can roll  1, 2 or 3 of the dice that you pull.  If you just need that one more energy, or one more character, to pull off your win – roll the dice.  If you are building for a future turn – prep some or all.  You get to draw your four and then choose what to do next.

Yes, it’s an investment, but when played well, you can roll it every turn (and hopefully get the action) to help you keep going.  It can turn the tide of a game very quickly.  In playing some of my recent opponents, I’ve invested in this die and my opponent has in turn gone ahead and bought one as well, as they are afraid of being left behind in the ramp and churn department. 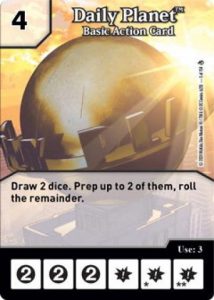 In set, there is another Basic Action that I thought I would use more…Daily Planet.  This is a four cost action, which feels infinitely more achievable to purchase than a five cost, and offers some options and flexibility as well.  Daily Planet reads: “Draw 2 dice.  Prep up to 2 of them, roll the remainder.”

However, for that 1 extra energy, you get 4 dice, which is double what Daily Planet offers, and we all know that double is always better than half…that’s just good math…unless it’s a bill of some kind…

What else can it do?

With that said, one of the risks of playing this card is that your opponent can buy it too.  If you’re planning to buy Investigative Journalism, you probably brought the Thor Global (IG), which your opponent can also use to discount it.

Thor’s Global Ability reads: “Pay bolt.  Once per turn, the next action die you purchase this turn costs 2 less (minimum 1).”

All of the modern Thors include this Global Ability, so I have pictured here the best one, which is the Super Rare, subtitled Jormungand’s Fear (IG).

For a single sided action die discount in Modern, there is Magik: Wielder of the Soulsword (DPS), a 3 cost mask, which reads: “When fielded, the next action die you purchase costs 1 less (to a minimum of 1).”

One other option you could choose to run is the Dark Phoenix (DPS) Global (again, choose your rarity – they all have the same Global Ability that reads: “Pay bolt and KO one of your character dice.  The next die you purchase this turn costs 2 less (minimum 1).”

However, I feel that the Thor (IG) Global or the Dark Phoenix (DPS) Global are both easier play and you are likely better to set up a way to punish your opponent for using Actions rather than trying to use Magik (DPS).  Consider cards like Lilandra: Majestrix (DPS), Forge: Reverse Engineer (DPS), or D’Ken: Obsessed (DPS).  You can check out what these do by visiting the Team Builder.

What do you think of Investigative Journalism?  Have you tried it on your teams?  Is there any better Basic Action in Modern Dice Masters?  Let us know your thoughts in the comments below!

4 Replies to “Out of the Shadows…Investigative Journalism”