Originally, we were planning on using the “Chaos” format this week and finally leave our legacy league to rest. But seeing as we only had one week left before a short holiday hiatus, it was decided we’d give this legacy league one last hurrah. I decided to go with some chaos anyway. Some…

The Team:  Let’s create some mayhem.

We’re going all out with the jank for this one. Orbital Strike is the centrepiece, with which I hope to deal most or all of my damage. Thunderbird is there to complement the Strike, to return any KO’d characters to the field. This removes a fundamental problem with Orbital Strike, allowing to recover more easily if (when) things go wrong. But I also included the opposite option: Harley Quinn. If she gets KO’d, she can completely upend the board state by possibly KO’ing both my and my opponent’s characters; it creates the potential for sheer chaos. I mustn’t use both together, though, or Thunderbird will return my opponent’s characters as well; it defeats the purpose of using Harley. 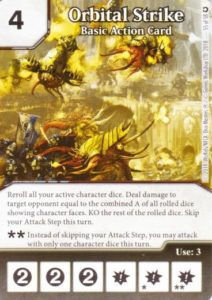 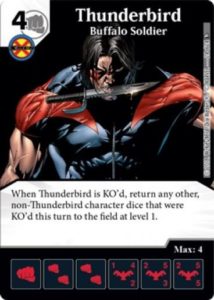 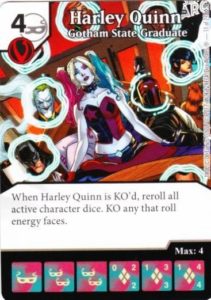 For Orbital Strike to be worth it, though, I need a ton of characters to roll. I decided to use Steve Trevor, who I can KO by using Fabricate (hence Tomb Guardian). By doing so, I can then purchase a Wonder Woman for cheap. By KO’ing 2 characters and paying 2 energy, I buy 2 dice with decent stats. Pretty nifty!

And if you add Tomb Guardian and Wonder Woman, I hurt globals, “When fielded” effects AND “When attacks” effects. So I have some pretty decent control, all things considered. 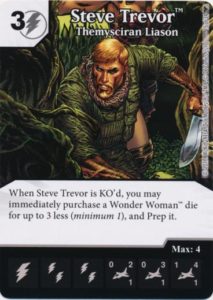 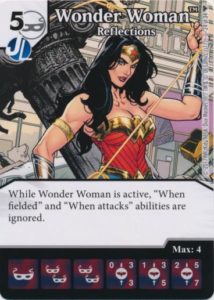 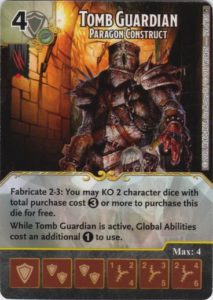 I also added other dice that are inexpensive and can have enough attack to be worthwhile. I threw in Rocket, who has good attack and a nice “When KO’d” ability for when Orbital Strike inevitably goes wrong. I also added Batiri Battle Stack, who has the added benefit of ramp. As if I needed that with the whole Fabricate + Wonder Woman combo. 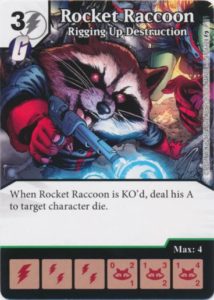 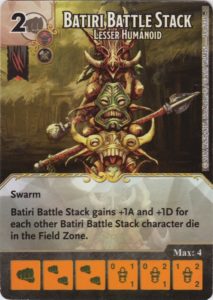 I added other sources of ramp in the other slots, primarily because the rest of what I would use is already banned. Shocking Grasp is another way to KO Steve Trevor if I feel like it, and it’s another form of cheap ramp I wanted to try in a constructed setting. Atlantis’ global needs no introduction, as it’s just S.T.A.R. Labs with a different cost. That last one, I figured I’d use it if Orbital Strike went wrong and Thunderbird was the last one left standing. Bring in a sidekick (assuming there’s one in Used), and I can now Fabricate to KO Thunderbird and return my stuff to the field. Fun times. 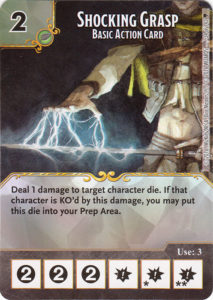 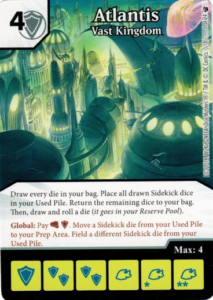 And with all that said, on to the games!

I started off the evening against Immortals. Thunderbird was an all-star here. I knew I’d need to block a lot, with my opponent relying on Overcrush to win. Thunderbird, returning my characters to the field, was essential here. I also got Steve Trevor early to Fabricate him out, and Prep some Wonder Woman dice for defense. This allowed me to slow the bleeding from my opponent’s Overcrush. Eventually, I used Orbital Strike and dealt 15 damage in one blow. My opponent tried to charge in with Overcrushing Immortals, but he didn’t have that many characters active, and all my stuff came back because of Thunderbird. I took advantage of this, and overwhelmed him with sheer numbers for the last few points of damage. I won.

Next up, I went up against a Justice League/Strike team. I went for Steve Trevor early again to get some Wonder Woman dice early. I also got as many Batiri Battle Stacks as I could; after my last match, it was clear that I needed to respond to large beat sticks with big numbers. Before I even got Orbital Strike to fire off, I got a bunch of Batiris and a Tomb Guardian to swing in for a ton of damage; even blocking all that he could, he took 8 damage. A few turns later, Orbital Strike dealt him 9. He was at 3 life, and I had over 10 attackers (with him having 3 characters). I won due to sheer numbers.

I went up against a Black Bolt Deadly team. In theory, that was a very favourable matchup for me. After all, all of his best characters rely on “When fielded” (Black Bolt) or “When attacks” (Bloat-Drone, Basilisk) abilities. Meaning that Wonder Woman could shut him right down. But when you play with dice, anything can happen. I took a chance with Orbital Strike, using it before I had Thunderbird on the board, going for the Harley play instead (big, big mistake). I assumed I could get a good amount of damage, and I should’ve been able to. But I rolled horribly, leaving only my Wonder Woman dice on the board. My opponent then attacked repeatedly, knowing I wouldn’t want to block with the only character that stopped his main combo from firing off. I then had another Orbital Strike bad luck, leaving me with no Wonder Woman at all. He took advantage of the opening and fielded Black Bolt, forced me to block his weakest Deadly character with all of my stuff as everything else went unblocked. He won.

-A janky team ended up being janky. Not surprised, to say the least.

-The Steve Trevor/Wonder Woman/Fabricate combo was very effective to buy tons of dice easily. I should’ve brought 4 Wonder Woman dice, but I just didn’t have space.

-Thunderbird was far superior to Harley with Orbital Strike, but those times I used Harley without Thunderbird, it was hilarious. However, it would’ve been far more useful to use Harley if I could’ve forced my opponent to attack. To revisit in the future.

-Shocking Grasp…is a mixed bag. I used it a lot on game 1, but afterwards, it was just clogging the bag. Relying on Fabricate to trigger Steve Trevor was far better.

So overall, this team was a fine way to end the legacy league on a funny note. Our local group is now taking a couple of weeks off, and then we’ll be right back to some fun on January 9, right on time to hopefully have that sweet, sweet new D&D stuff available. After I finish up the Essentials List, I’ll take a bit of time off and return at that point. Until that time, keep on rolling!