This was an interesting night.  Someone had suggested that we build one card Teams.  That’s it… Two BAC’s and one other card.  The only stipulation was that we could not use Super-rares.  We wanted to avoid the Tsarina onslaughts.

This actually proved tougher to decide what to build as there were really not many accessory pieces to use.  Do you pick something easy like Boom Boom or Yuan-Ti?  Stick with something with Overcrush?  Unblockable?

I decided to use this opportunity to play with some cards that I had not used before… and also maybe include something to mess with people (because that can be more fun than winning).  Most of us could not settle on one card, so we decided at the beginning of each match you would randomly select a card from what you brought and play that.

Since there is really no “build” here, I will include a link to each Team I played. 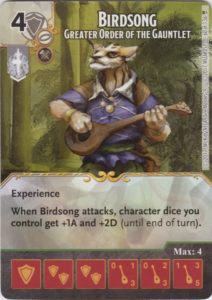 First draw was Birdsong.  Heavy Armor was an easy add here in case of Overcrush.  Rally was to get as many Sidekicks out as possible to make my Field big.  Turns out the Overcrush protection was a good thing, as my opponent ran the Giganta that could spin up to gain Overcrush.  He made a big error by not including a buff global.  Essentially, I did not even need the burst face on the Heavy Armor as the defence of my Birdsongs were enough to deal with the bulk of the problems.  Eventually, I built up my Field enough and swung in enough times to kill him with Bard-lite.  This would have been a different game with a buff. 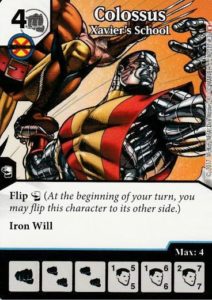 Ok… The smart play here would have been to go with an Overcrush action, but I have always wanted to try Hypervelocity and this seemed like a good choice.  My opponent ran a Team that I had thought about making.  Malekith to make Sidekicks Villains and Villainous Pact to kill me by numbers.  Luckily, he also brought Distraction because he feared Unblockables.  I was able to get 2 Hypervelocity’s out which forced him to attack when he didn’t want to.  I tried to keep the wall down to a manageable size by swinging with Colossus on every turn.  Thanks to Distraction, I stayed alive a lot longer than I really should have.  The game went to time and he beat me in life points by 1. 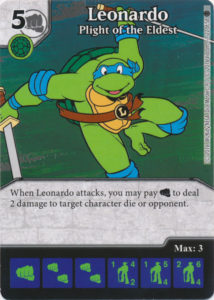 My opponent joked that I broke my one rule… I went full Turtles.  To be fair though, this was a random draw.  Leo drew up against Rare Nightwing.  Similar strategy between the two of them.  Give Me A Break was to get around pesky Blockers as the likelihood of other Turtles would be slim.  Dice Masters as a game works better when you can roll characters.  I missed way too many Leo’s and actually had trouble ramping up to him in the first place due to bad rolls.  By the time I was able to mount anything, I was on the defensive and could not withstand the Nightwing attacks. 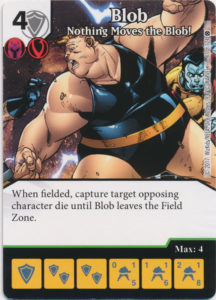 This was one of my “mess with you cards” that I brought.  I decided to go all-in on this and threw on Imprisoned.  Call to Action was really the only thing I could think of to make Blob a little better.  This big boy went up against Rocket Raccoon (deals damage when KO’ed).  Basically, it was a race for Imprisoned dice, of which I got 2.  Then it was build up the Blob army.  Now I had 6 dice that could take things away.  However, we went the aggro route and never really had anything in the Field for long.  Blob is not a good Aggro character in case you were wondering.  I eventually was able to get a level 2 and 3 Blob in the Field which protected me from Imprisoned and made his Rockets less dangerous.  He got me down to 2 when I managed a god-roll to buff another Blob and send in enough Sidekicks, all while Imprisoning his entire Field, to deal just enough damage for lethal.

This was a really strange format… and a really fun one.  It is really hard to build something around only one card.  Knowing that you lose a lot of the accessories that make something good.  I am glad that everyone didn’t take the easy way out with their builds as it resulted in some really fun matches.  I also liked the randomness of the matches.  You really did not know which card you were playing until you flipped it over.  Then you had to scramble and figure out what BAC’s would work with it.  Definitely worth trying out if you are looking to do something different on your Dice Masters nights.

If you had to pick one card to rule them all, what would you go with?  What are some unique cards that could hold their own in a one on one match?  Share your thoughts in the comments below.

2 Replies to “One Card To Rule Them All”