We held a One Big Weekend Event in Calgary on the afternoon of Saturday, March 9.  We had a total attendance of eight, three of whom weren’t regulars at the local weekly events.

Please note, the draft pack boxes in the cover photo are do it yourself stuff designed and printed by some of the locals.  They are NOT something you can order from Wizkids, so please don’t try.

Jourdo used one new campaign box and one each of the new team packs supplement with spare cards and dice from the Justice League set to prepare 10 draft packs, each with 2 BACs and 16 other cards with ~matching~ dice (i.e. colors probably weren’t going to match for some of your characters, and proxies were used for most of the action dice).  That was used for the first half of the draft.

Everybody got a half-dozen Justice League team packs for the back end of the draft.

We ran the draft so that everyone passed one of the two BACs we originally drew.  I drew Pick Your Battles and Static Field, and opted to pass the former, receiving Villainous Pact.

That was good and bad.  Good, in that it gave me easy access to a ramp global, in a set that was not exactly overflowing with ramp options.  Not as good, I needed to include a number of affordable villains on my team.  Because using Villainous Pact without using Villains is inviting your opponent to buy the action and kill you with it.

Since I opted to keep the Static Field BAC and its global I wanted a burn damage option.  This turned out to be the Zatanna which gave Mystics attune.  I only managed to draft one other Mystic – the Black Adam that allows Legion of Doom characters to send opposing characters they KO to the Used Pile instead of the Prep Area.

Also, I had this Parasite: 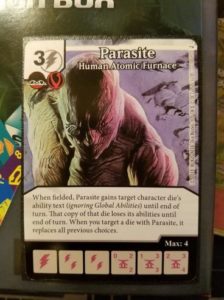 If my opponent has no abilities of interest, I can have Parasite steal Zatanna’s text.  Parasite would gain Attune, Zatanna would lose Attune when her text was stolen, but since she keeps her Mystics affiliation, the text Parasite stole from her will end up giving her Attune anyway, and I end up with an extra character with Attune until end of turn.

Now if you plan on using Attune having some decent low cost action dice to buy comes in handy, so the Yellow Lantern Ring that gives Intimidate to characters in my Reserve Pool was the next addition.  (Note:  There is an error in Team Builder.  If you’re looking in List View, that Yellow Lantern Ring shows as a 3-cost bolt, but that card is actually a 2-cost.)

I figured the presence of the Villainous Pact BAC would provide a strong incentive for my opponents to field villains.  That convinced me to include the Martian Manhunter than would give all my characters Overcrush if my opponent had any active Villains.

Next came the Darkseid that gets +4/+4 when engaged with Justice League characters.  He’s only a 4-cost, I had two dice for him, he’s basically guaranteed to KO any JL character he blocks, and while I’m unlikely to have him blocked by a JL character while he has Overcrush my opponents at least have to be wary of the possibility given Martian Manhunter’s presence on my team.

The last two cards I opted to run were The Joker:  Not Funny Anymore and Scarecrow:  Choose Poorly.  The first deals an opponent two damage whenever they field a character that shares an energy type with a character they already have active.  The latter has an ability that allows me to increase the purchase cost of one of my opponent’s cards by 3 so long as Scarecrow is active.

I drafted a Black Manta:  Deep Sea Deviant but decided not to run it.  I’m not a fan of how that card uses a keyword quite differently from every other card that uses that same keyword.

This opponent was using the new Ping Basic Action, which proved pretty useful for me, as well as (the also new) Energy Field.

I got my Zatanna and Black Adam out early, then bought a couple of Pings and my Yellow Lantern Ring dice.  I also bought a Joker somewhere along the way.

For about the first four or five turns my opponent could not roll a character face, not so much as a single Sidekick.  Then, when I started drawing action dice, I had similar troubles and took several turns before I could manage to land any action faces on any of them.

Eventually, things settled down some.  I started dealing Attune damage.  He got some characters out, including, eventually his big gun: 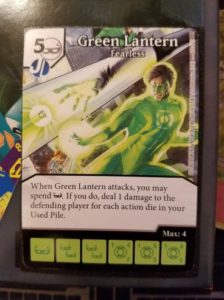 He only managed to deal me 1 damage with its ability, the first time he attacked with it.

Shortly thereafter, I managed to field Parasite, steal GL’s ability and hit my opponent for 4 with it.  I’d actually managed to start landing some action faces by that point, so between Attune and Ping damage  I was starting to wear him down pretty quickly.  He also took 2 damage from Joker to field one of his characters.

I eventually managed to finish him off with some Attune damage.

The feature pieces on this team were the same Phantom Stranger that Laurier just highlighted in his Stranger Danger article, and 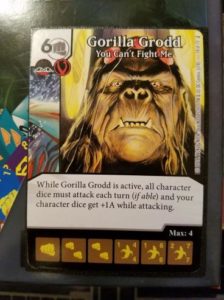 If I may paraphrase, my opponent told me after the game he found this card to be a real double-edged sword.  He Forces the entirety of your own field to attack, and that is not always a desirable strategy.

He chipped away at me, mostly with the Zatanna that deals the controller 1 damage when a character die is spun up.  I did some Attune damage to him.

He did get a Phantom Stranger out, which complicated things, but since he didn’t have a force attack other than Grodd, it was manageable.  And when he did field a Grodd, his field was forced to attack first.  He had more characters in the field than I did, but most of them were Sidekicks.  He did a lot of damage, given the Grodd buff, but not enough for lethal.

Combining this Grodd and this Phantom Stranger might be very interesting if you have something like the True Believer/Odin’s Fury global so you can avoid having Grodd make you shoot yourself in the foot.  Lucky for me, neither of those were in the available pool of BACs for this draft. 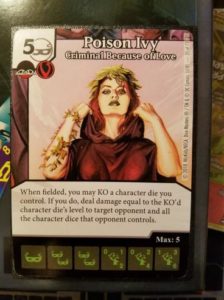 Basically, his team was the above Poison Ivy, the Zatanna that spins up characters as they’re fielded and a Catwoman that allowed him to Prep a die when she was fielded.

I pretty much lost the game when I didn’t buy my Scarecrow before my first bag refill and target his Poison Ivy card with it.  That would have made his Poison Ivy dice cost 8, which may have slowed him down enough to give me a chance.

Jourdo recorded video of this game, so you’re going to have the opportunity to see for yourselves just how much of a butt-kicking I received in the not too distant future.

Basically, factoring in Zatanna’s spin up ability, he could field her, then KO her to effectively hit me with a Breath Weapon 3 (at no energy cost).  And, she winds up in his Prep Area, primed to repeat the procedure on his next turn.  Technically, on average, she should wind up at Level 2 a third of the time, but in our game she was at Level 3 all 6 times she hit me.

Add it a couple of early pokes from Sidekicks, and that’s everything he needed to finish me.

With Zatanna’s max D being 3, she kept getting KO’d and I never got any Attune damage.  The Joker die I bought didn’t seem to want to come out of my bag, and when it finally did, it stubbornly stayed energy.

I wasn’t going to win anyway, but my dice seemed to be against me in this one.

First, big props to Jourdo for hosting the event and assembling the Draft Packs.  He’ll be giving you a little more detail on how he went about that in a forthcoming post of his own.

The event was a great deal of fun.  That Poison Ivy is brutal, and easy to overlook.  If you have an opportunity to participate in a draft involving the Justice set, don’t make the mistake I did (i.e. passing her).

After the games, we divvied up some swag in a snake draft.  I’m lukewarm on foils (I like to be able to read the cards I’m using) so I focused on grabbing spare dice for the new characters and actions from the new stuff.

I gave all the new cards I’d drafted to one of the non-regulars who didn’t have any of the new DC products.  I have all of those cards, and didn’t see any need to include duplicates in my collection.

Thoughts on the new cards I ran in this event:

Parasite:  Human Atomic Furnace is a lot of fun, but I suspect it’s not going to see a lot of play, simply because players are going to gravitate to Maxwell Jensen instead.  Still, how can you not be at least a little bit tempted by a card that allows you to steal the ability of your opponent’s most dangerous character card?

Black Adam:  Angered is pretty useful on a Legion of Doom team.

I will point out again the purchase cost error on Team Builder regarding Yellow Lantern Ring:  The Weaponer’s Ring.  Because, in my opinion, it’s a card worth running at its actual 2-cost, but would not be at the listed 3-cost.  How many characters you will have in your Reserve Pool to give Intimidate to when it comes up will always be something of a crapshoot.

As for Zatanna, anything that gives Attune to everything sharing an affiliation is pretty useful.  I was barely able to draft any other Mystics and I still did quite a bit of Attune damage in my first two games.

I didn’t get much of a read on Joker.  I think I bought at least one die for him in each game, but they were all late game purchases, and he didn’t have much impact on any of them.  I think the card has a lot of potential, it just wasn’t a big part of the team on this day.