One of our local players had saved an unopened gravity feed of Thor which we decided to draft this week.  For BACs we decided to shuffle up the BACs from Avengers Infinity and the Harley Quinn team pack and dealt 2 at random to each player.

I didn’t see anything that stood out in the packs I opened.

I decided to try using 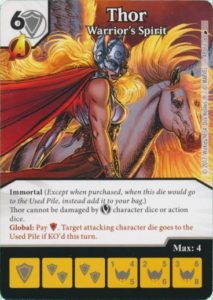 and going the Immortal route.  I was hoping I’d be able to use her global on opposing attackers to keep my opponent’s field thin.  There was a risk of the global being used on my attackers, of course, but if those attackers were Immortal, the global would send them to my bag rather than my Used Pile.

Still, I won’t deny I was very happy to get a hold of an uncommon Jarnbjorn late in the draft.

This was against a Warriors Three less Fandral team.  Of course, it’s the Intimidation from Hogun and the Overcrush from Volstagg that truly makes the Warriors Three so difficult to cope with.

I let a Volstagg-Hogun pair through for 14 damage, and got 10 damage  of my own in with a Jarnbjorn boosted Balder and Volstagg.

Target Lock saved my bacon in this game – well, nearly, as, on three separate occasions my opponent had to send a Volstagg he’d  drawn to his Used Pile because of it.

I couldn’t do enough with the time it bought me.  Eventually, he drew a Volstagg and a Hogun on the same turn.  He landed Volstagg on his initial roll.  If he landed Hogun on the re-roll, the game was his – but he whiffed.

I drew Jarnbjorn on my subsequent turn.  If I’d landed it, I’d have had the game.  But I whiffed.

Time had been called during that turn, and my opponent was ahead on life, giving him the game.

Bye.  At least I wouldn’t go winless on the night.

Note:  As I’d used Target Lock heavily, and hadn’t gotten much use out of the Thor global, I switched out Thor for common Malekith between rounds 1 and 3.

This was a mixed bag team – Blackheart, common Hulk, Absorbing Man, and most problematic for me – the Loki that, when he was active, made Immortals only deal 1 damage.

He didn’t field any Sidekicks on his early turns, so I repeatedly poked him 1 Sidekick/turn.  Along with some buffs from his Hulk global that quickly got him down to around 13.

Then he got Loki out.

Since all my big characters were Immortal, I decided my best play was to try and swamp him, buffing any unblocked characters as much as possible.

It came closer to working than it probably should have, and it certainly gave my opponent a scare – I think I got him down to 3 life.  But eventually it left my own field too thin, and he was able to swamp me.

This was my first time seeing Target Lock in use.  It can be incredibly useful (or aggravating, if it’s used against you.

As for the rest, it was draft – it’s fun, but it’s difficult to reach any broad conclusions, since the whole point of drafting is having limited options.