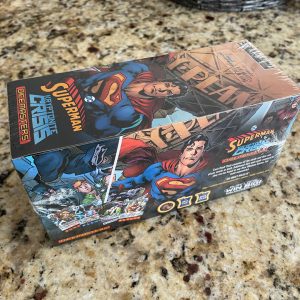 Tonight was supposed to be our regular constructed Dice Masters night, but a little package arrived at dmNorth HQ that threw a happy wrench into that plan.

Thanks to our kind friends at Wizkids, we received a preview box of Superman: Kryptonite Crisis.  Since this box arrived on our regular live Dice Masters night, I decided it would be fun to bring it down to the local game store and give our group a chance to draft from the newest Dice Masters set.

Everyone was game to drop their constructed Teams this week in order to play with the new toys.  Players were encouraged to draft for a good Team instead of collecting.  We have other plans for these cards, so everyone returned what they drafted tonight.  Don’t worry… players were compensated with Dark Phoenix OP goodies to make up for their sacrifice.

As our friends over in the UK have already had access to this product officially, we decided to dub this the unofficial North American Superman Kryptonite Crisis Preview Draft.  Let’s take a look at some of the card combos that showed up on the night!

What Did You Draft?

There were three players who made it out tonight.  We all picked a pack and had at it.  Draft your best and see what you could come up with.  Each of us managed to find a legitimate win condition and gained some insight into the new toys that are coming in Dice Masters.  Unfortunately, the Team Builder links (as of the publication date of this article) currently do not work for Kryptonite Crisis and we cannot easily share what we had to pick from in each pack.  That should not be the case once the set has officially been released. 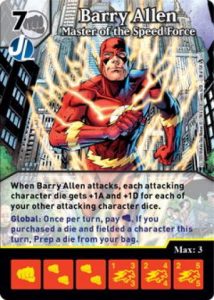 I was presented with a difficult choice for my first choice.  I had the super-rare Wally West and rare Barry Allen in my opening hand.  Under normal circumstances, I would have drafted Wally as I am a red stripe guy 9 times out of 10.  Since this was a non-keeper draft, I went for win condition and took Barry Allen as the first overall pick.

For those not familiar with the ability, Barry Allen is essentially a reprint of Half-Elf Bard from Faerun Under Siege.  It buffs all of your attacking characters based on the number of characters that you attack with.  The strategy is pretty basic with him.  Load up the Field with as much as possible and swing with as many characters as possible.  Hopefully you have a wide enough Field that you get large chunks of damage around your Opponent’s blockers.

The challenge I found in the Draft Format was that Ramp seemed to be limited.  I did not have any great options myself (even though Barry Allen has a Global Ability that is Ramp-like… just not a great one).  That meant that reaching for the 7 cost was going to be the challenge.  The rest of the Team was built with low cost characters to help build to purchasing Barry.   When I could get to Barry, he is just as good as you could expect.  When I couldn’t, the Team struggled.

Really, this was a no brainer draft Team.  If you see a yellow striped Barry Allen in your hand, take him. 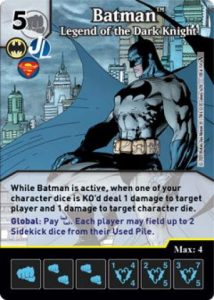 The common Wally West was the first overall pick in this Draft Pack, as he is a very cheap character in the early game.  He probably will not win you any games, but at least he has a decent body.  Son of L got lucky and was passed a nice yellow stripe early in the Draft.  He got to play with the new rare Batman, which we recently showed off in our Dice Masters Rewind video on YouTube.  The goal with this guy is to be able to KO your characters and deal direct damage to your Opponent.

Batman also provided a Global that allowed you to field Sidekicks from your Used Pile.  This Global has definitely gotten some hype leading up to the release of this set, but funny enough it proved very difficult to pull off.  It was either a lack of energy to use the Global, or a lack of Sidekicks in the Used Pile when the energy was available.  It will be interesting to see how this Global ends up playing in the constructed game.

In constructed, this is not hard to pull off.  In draft, it is a little more difficult.  Son of L chose to pair Batman with the uncommon Mary Shazam and common Green Kryptonite.  Mary Shazam had a “when fielded” effect that allows her to deal damage to up to 2 character dice.  She could help remove blockers or maybe start a KO train on your side of the Field.  The Green Kryptonite would allow him to potentially KO and recycle Mary Shazam to repeat the process.

He also brought the only real viable Ramp Global on the evening.  Starfire, while not the greatest Global, proved to be the only consistent source of Ramp.  You need to be able to purchase a character in able to trigger it, but it was better than nothing.

The Team was on the slower side, and ended up more being a Team of stats than a Team of KO shenanigans.  There was definite burn damage from the Dark Knight, but not nearly as much as I hoped to see.  Rare Batman is a great card, but maybe not the best draft card. 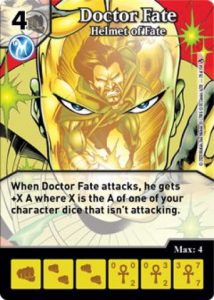 The first draft pick for kksimons was the common Harley Quinn.  That is no surprise when a 1 cost character is available.  Unfortunately, there was only one Harley in the draft pool and dice numbers were limited.  While a cheap character is always great in Draft, they are generally not solid win conditions on their own.

Enter Doctor Fate.  The common Doctor Fate gets a solid stat boost from characters that do not attack.  With the right bodies in place, the good Doctor can easily push significant damage through to your Opponent.  Superman: Kryptonite Crisis is not lacking in that department with the plethora of Kyrptonians available to pick up.  Kksimons chose to pair Doctor Fate with the 3 cost Supergirl, who tops out at an 8A/8D on level 3.  Yes, there was the drawback of boosting your Opponent’s Sidekicks… but the payoff was worth it when you could potentially attack with 15A Doctor Fates.

Add Thrown Car into the mix, along with some spin up Globals and this became a solid Team that really did not need a lot of pieces in order to work.

Tonight was not a large sample size, but still got to show off some of the toys available in this latest offering in Dice Masters.  I am always happy to see more DC offerings in Dice Masters, and so far this set does not disappoint.

While Batman and Barry Allen are great cards to pick up, I would not be counting on seeing them in every Draft due to their rarity.  Doctor Fate, on the other hand, will very likely be in most Draft Pools.  You definitely want to be counting those dice when you look at the rainbow and be prepared to deal with this beefy attacker.  Of all the Teams tonight, Doctor Fate was probably the most solid “Draft” Team as it made use of the most common cards and the pieces would likely be seen in many Draft Pods.

All Teams went 1-1 on the night, and if all things go according to plan we should have coverage of those games over on our YouTube channel.  Superman: Kryptonite Crisis was definitely a fun set to draft tonight, and we cannot wait to Draft for keeps when the set releases in North America next week.

But wait… this was only 3 packs.  What about the other 5?  Stay tuned to dmNorthTV for more on that in the next couple of days.

What card will you be most excited to see in your Draft Pack?  What is your general Draft strategy going into this Format?  What card are you most looking forward to playing with from Superman: Kryptonite Crisis?  Let us know in the comments below, or on our Socials (@dmNorthTV), or join the conversation on our Discord.

Finally, if you are in the Calgary area, feel free to join us every other Wednesday at Sentry Box, starting between 6:00 PM and 6:30 PM local time. If you want to join a great group, get in touch with us on the Calgary Dice Masters Facebook Group. Come join a welcoming community and play some Dice Masters live!!