This post is a separate point of view, but is for the same event Jourdo described in his Reading the Meta article, where our teams were required to include one of these three cards: 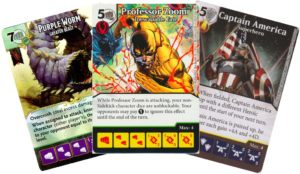 Heroic is a mechanic with a deservedly terrible reputation, but I have always maintained there is one decent Heroic card and Captain America: Superhero is it.  I actually ran a Heroic team using Cap, Cyclops and Thrown Car with some success several years ago, so I decided to go the Cap route.

Like Jourdo, I put SR Mimic on my team so I could get Cap’s effect twice when they paired up.  I included Rare Warth as the pairing up of Heroic characters happens as a ‘When fielded’ effect, and Mimic can’t copy Cap’s ability until they’re both active.

I decided to try something besides the overcrush route, and since I was going old school with Heroic I decided to add Spider-Man:  Webslinger 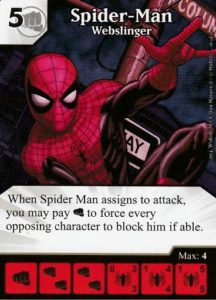 That’s 3 5-costs and a 4-cost so far.  I figured I needed some cheaper characters, so I added some common Batiri Battle Stacks.  2-costs, fist energy to potentially pay for Spider-Man’s ability or if I get all 4 out with Webslinger to tie up my opponent’s blockers, that’s 16-20 damage.  And also, Swarm to give me early ramp.

I rounded out the team with three control cards – Shriek, Scarlet Witch, and Wonder Woman:  Ambassador of Peace.  For BACs I went with Thrown Brick and Resurrection for some more ramp options.

Purple Worm, Batman: Plays Too Rough and Investigation.  I Shrieked Batman, and got Scarlet Witch out, but I’m pretty sure he got action faces on more than 25% of his action dice.

I avoided fielding any Sidekicks even if his Batman was Shrieked, because I had a suspicion about how this would end.  He got his Purple Worm out before I got my pieces set up, he KO’d Shrike with Purple Worm’s effect to restore Batman’s buff and Overcrush, and I was dead.

Purple Worm, Rare Human Outlander supported by Uncommon Absorbing Man, Golden PXG, and Wonder Woman: Reflections.  And also Kryptonite to blank his own Wonder Woman and unleash his Purple Worm when the time was right.

He got his Wonder Woman out early which made my Shriek useless.  My Wonder Woman refused to roll a character face when I drew her on Turn 3, but I did eventually get her out and it did slow him down quite a bit.

His Wonder Woman nullified the Webslinger ability, leaving me no better option than bashing at his wall and hoping he wouldn’t reroll the KO’d characters.  There were only so many times could go to the well on that one, since it gave him a means of KOing his Human Outlander die (fortunately he only managed to get one in the field) which combined with Absorbing Man meant I took four damage each time it happened.

Somehow, I lasted to the time call, but he got to lethal on his final turn.

This was against our group’s resident youngster.  She doesn’t pay attention to our ‘Special Event’ stuff so she was running a Justice League team with JL characters from the new campaign box, supported by the Clayface with the global and Black Manta.

I actually managed to field a Warth die with Captain America and Mimic in the field.  She had only one die in the field – a Black Manta – at that point, and I had enough other dice I didn’t even need the extra damage from the Heroic ability to get to lethal.

With the advantage of hindsight I now realize a Heroic team was never going to work at this event.  There are too many ways of sabotaging the mechanic, and too much incentive for players who thought things through to bring Wonder Woman: Reflections or something similar.

What would I do differently?  Probably bring Reflections myself (instead of Ambassador of Peace) and come up with a different alternate win con (that didn’t rely on a ‘when attacks’ ability).

Thanks for reading, and Happy Rolling