Thanks to some technical difficulties at work, I am missing my regular Dice Masters night tonight.  So, I have decided to reach way back to last Sunday and share my little annoying Team from that day.  The whole idea was to play around with these two and basically un-purchase everything. 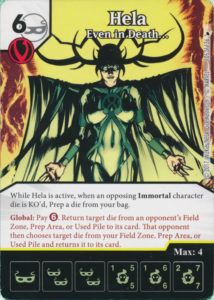 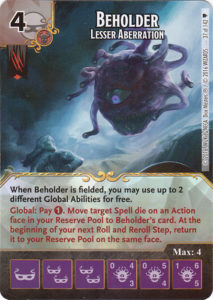 I have been wanting to play with Hela and Beholder for a long time now, and since this was the early part of our Achievement League, I decided to throw away the achievements this week and just have some fun.  Let’s check out the build.

The Team:  Returns and Exchanges.

The core of the concept was simple:  Field a Beholder and use the Hela Global to send dice back to the card.  How do I make the most out of that without hurting myself too much?  Enter Madame Masque and Collector.  Collector allows an “on-demand” fielding of Beholder, which is great in this build.  Masque will prevent my dice from being targeting by the Hela Global, so everything should be one sided here (more on that later).

With the core in place, I needed some accessory pieces.  Kate Bishop works here for two purposes:  1.  Her Global will help me by Bishtracting my Opponent’s attackers as I plan on having a fairly lean field, and 2.  Her ability works well with Collector is everything is going to hell (more on that later).  Falcon was put in place to deal with things like Shriek, Blob, and in this Team’s case Wonder Woman (she kills it hard).  Absorbing Man was added to help double up on my “When Fielded” effects and also protect me a little from my Opponent’s.

With only one slot left, I figured that this could be a high energy requirement Team, so I added in HXG purely for Ramp.  On that note, I tossed in Resurrection and Create Food And Water for the same reasons.

I was up against a blank Team that originally had Resurrection and Imprisoned on it.  He is still a newer player and I pointed out that Team-Up might be a better BAC for him as he had a few different Affiliations and could get beefy fast.  He agreed and I lent him my card to use for the games.

Now for the later that I had mentioned earlier…  During this game we were chatting with one of the players who had the Bye and we were discussing the Hela Global and Madame Masque.  After some serious considerations, we all agreed that Masque would prevent my Opponent from triggering the Global.  However, if I chose to trigger it, I would have to follow through and put one of my dice back on the card.  It actually made sense, but threw my entire plan out the window.

New strategy:  Collector in Kate Bishop as much as possible.  By the time we had made the Hela/Beholder decision, I already had Collector, Absorbing Man, and Masque in the Field.  Time to Bishop.  I essentially sent through paper-cut after paper-cut on each of our turns.  His field was growing and I knew Team-Up was coming.  He swung and I ate a bunch of damage (remember kids… life is a resource), but it left his field small.  The next turn, I fielded a Falcon and also brought one in with Collector to clear the board.  I marched through for lethal.

This game was against the guy who ruined my fun in the previous game… Also, he was playing Big Immortals with Limited Wish.  Collector, Absorbing Man, and Kate Bishop was the plan for this game.  He was buying things with Limited Wish like crazy.  However, his cycle was a little slow.  I would swing early with some characters while the Field was open before moving to the Collector/Bishop combo.  The paper cuts definitely hurt more when Absorbing Man is making them worse.  Eventually he bled to death as a result.

A all Fist Team.  This game he was focusing on Guy Gardner, as he had not used him most of the day… lucky me.  The plan here was to get stuff in the Field to block Guy if I couldn’t Bishtract him.  I didn’t care what it was.  Eventually, I got my Collector out and he had just bought his Purple Worm.  If you have not played against that, let me tell you that the worm is brutal.  I decided that I was going to pull off the originally planned combo and risk my own characters to save myself from that beast.  I used Collector to bring in a Beholder to send the 7 cost Worm back to the card, but lost my Collector in the process.  The rest of the game was more or less just smashing back and forth with a couple Beholders I had in the Field until I got Kate Bishop into the Prep Area.  He was down to one life by then and conceded when he missed his rolls.

This did not end up being the Team I went into the games planning to play.  Hela/Beholder is a great combo when it is balanced like we played it.  I think saying that Madame Masque makes your characters completely immune to the effects borders on broken.

Either way, Wizkids… If you are reading this… Please make a ruling one way or the other with regards to this.  Actually on all of the Hela cards.  She has some interesting abilities, but there are just too many questions out there as to how they actually work.

Back to the Team though… Collector is still just plain old fun to mess around with.  Pairing him with Absorbing Man is almost a no brainer here.  Double every effect  you create with Collector?  Yes please!

Kate Bishop proved to be the All-Star today, even though she started as an accessory piece.  Thankfully I had her to lean on, or I would have struggled more.

Overall, I like Collector-based Teams, and this one worked just as well as any of them.  I will be sad to see Beholder rotate out as it has such great abilities and the stats are amazing for a 4 cost.

What are your thoughts on this Hela/Beholder/Madame Masque combination?  Would you let Masque’s ability prevent the Global from targeting your characters, even if you initiate it?  Let us know what you think in the comments below.

One Reply to “No Returns Without a Receipt”