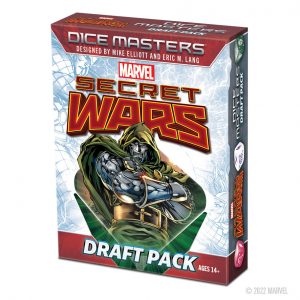 We learned that Secret Wars will be the launching point of a new Card Design, as well as a new entry point for new players, called Origin Packs!

Read on for more details and images, and make sure you check out the WizKids release article!

WizKids has started fresh with the new Card Design. Here you will see two Super Rare cards, both Spider-Man, the one on the left is the current card design, from Avengers Infinity Gauntlet (IG), and the one on the right from the upcoming Secret Wars set (SW). 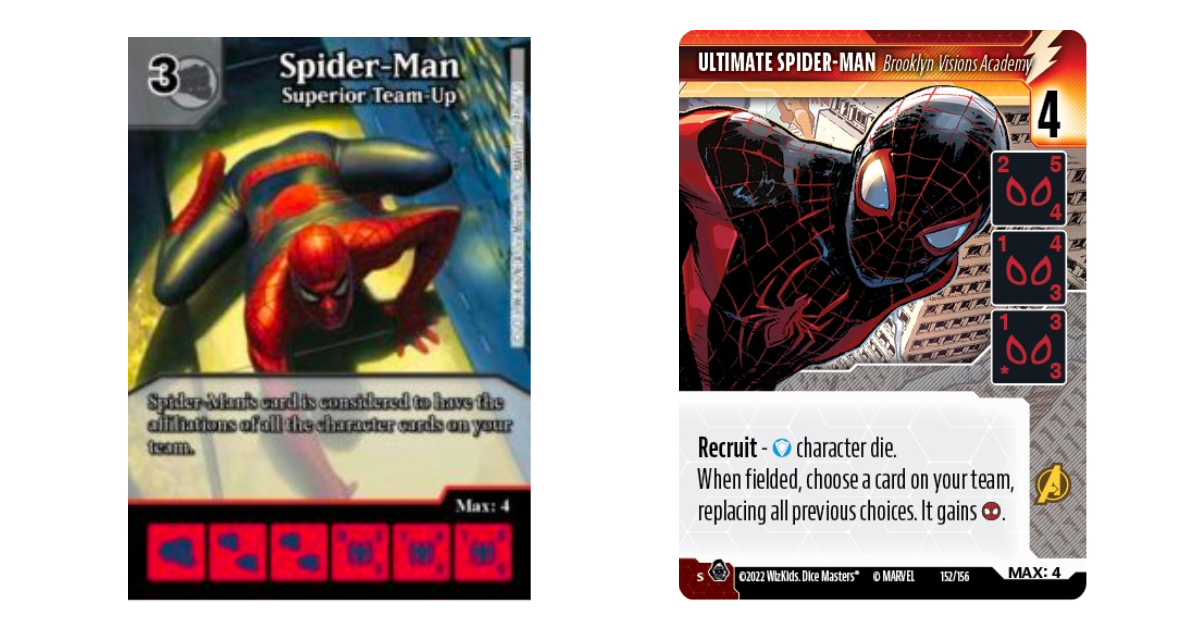 The first thing that I noticed is the modern design of the new card.  The art pops out as if Spider-Man is going to jump off the paper and onto my mat!  Next, the card text is so much easier to read, both in the white text box and also along the top, with the Card Name and Subtitle all on one line.  The Energy Type and Purchase cost are clearly indicated in the top right corner of the card, and as you’ll see throughout this article, energy types are also colour-coded, both for purchase costs and for abilities like you see in the Recruit ability of Ultimate Spider-Man.

Redundant information on the card has been removed, such as the energy faces of the die, to give the art and text more real estate.  Everything you need to build your team is along the right side of the card, so if you splay the cards in your hand to the right, you can see the purchase cost, energy type, die levels, affiliations and max dice for the card – everything you need to build your team.

Important information for Collectors is now all along the bottom.  Starting on the left, you have the rarity indicator, which has a colour and a letter to indicate the rarity, and the set symbol.  Trademark information will follow here, along with the IP information (in this case, Marvel), and then the set number.

Of note in regards to the die levels – they are read from bottom to top – level 1 being the bottom, and level 3 (or 4!) being the top level.  This makes sense from a logical perspective, just like from left to right made sense before, but it may take players a few games to get used to this.

A classic Basic Action returns in Secret Wars, as a reprint of Distraction.  I’ve pulled up the original Distraction Basic Action from Avengers vs. X-Men for comparison. 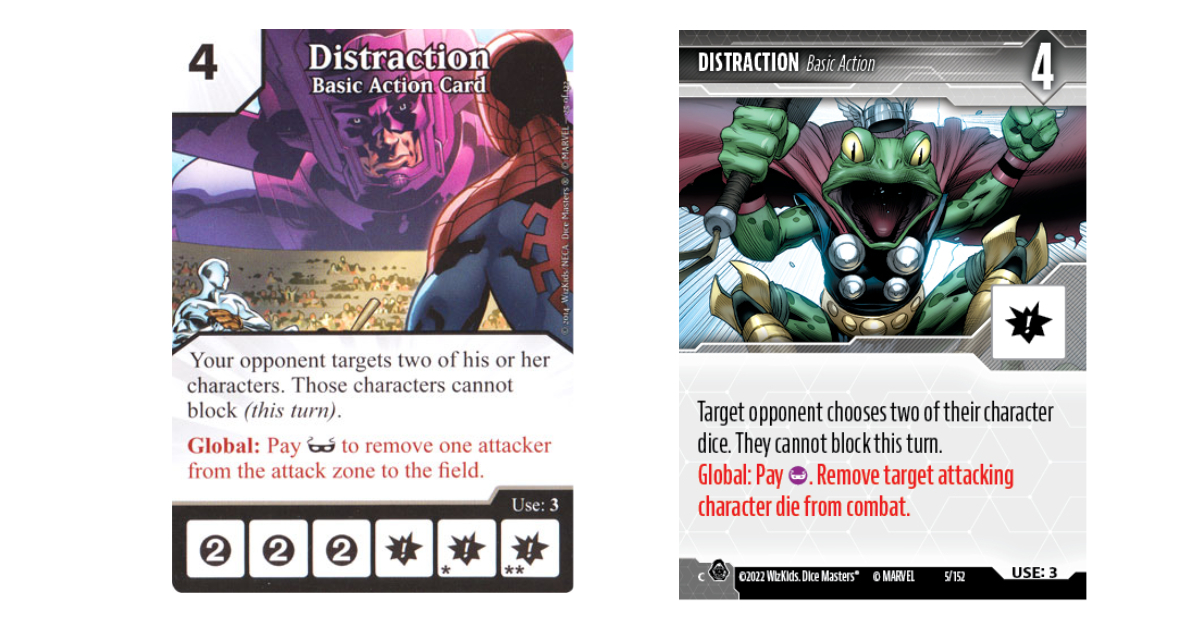 Once again, we see the modern card design with easy to read text, and the colour-coded Global Abilities, as compared to the original card.  WizKids continues to remove redundant information, as the subtitle for Distraction removes the word “Card”, along with the multiple sides of the Action die, similar to the work done on Character cards.  The new design is a much cleaner look than what we’ve been playing with for the last (nearly) 10 years. 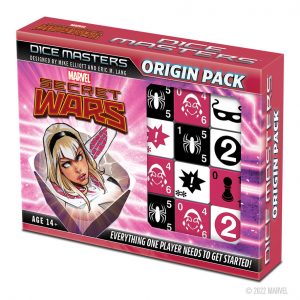 Origin Packs are now the entry point for a new Dice Masters player, but there’s something in each one for a Collector as well!  Each pack includes two character cards that will be available in the draft packs, but those character cards will have a different art treatment in this pack.  The pack includes three dice per character, two sets of Action Dice, and one set of Sidekicks – in a unique colour that will not be available anywhere else! 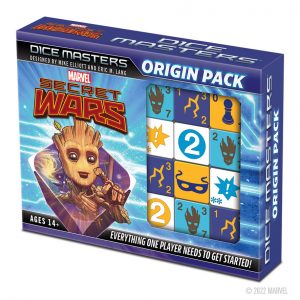 The pack will also include a quick start rules document to help a new player learn, a QR code that will link to the full rules online, a small paper playmat and basic action colour indicator cards.  There will be two unique sets available with the Secret Wars launch.  One includes Spider-Gwen & Spider-Man, and the other is Baby Groot & Storm.

The MSRP on these packs is $6.99, so it’s an easy entry point for a new player to learn.  Once your new player has picked up the basics, it’s easy to grab a draft pack and start making teams.

One thing to note: in order to keep the price low, the pack will not include a dice bag.  As suggested by listener jackalopespam (Nick), the box could, in a pinch, double as a dice bag for teaching purposes…until the player is ready to bling out their game.

A Few Other Notes 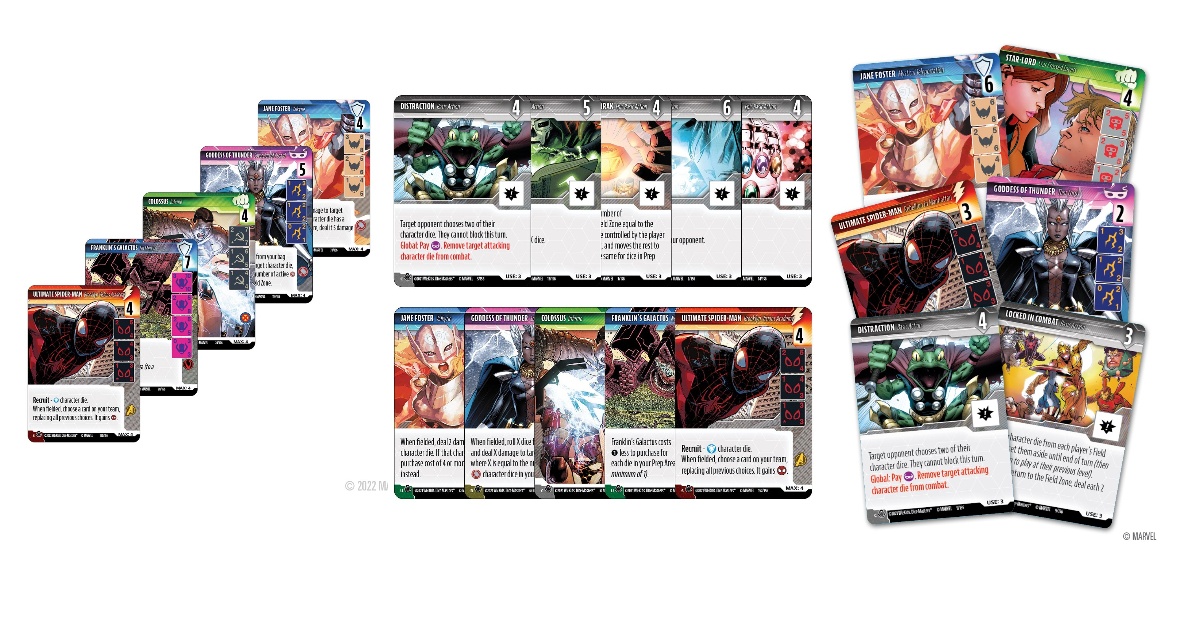 A couple of things I noticed looking at the cards that have been shared in the preview article.  All “vanilla” cards – cards with no ability text – are full art.  This will be standard and will not be something Collectors need to chase.  As Jimmy said, if there’s no text, who needs a text box?  Let the art shine.  You can see hints of this from the Colossus card pictured above.

The Rare rarity has changed from bright yellow to a more gold colour.  It’s much more prestigious looking than it has been in the past, which is fitting for a more exclusive card.

Epic Basic Actions are coming our way!  These unique Basic Actions will have a subset of rules for their play, and for full details, you can hear more about them on The Ministry of Dice Podcast, episode 125, be sure to check that out!

Franklin’s Galactus is coming our way as the first ever character with 4 character sides!  We chatted a bit about this with Jimmy on the podcast and encourage you to listen to the episode for all the details we could get.

The biggest and most important takeaway for me, as a result of the redesign and Jimmy’s press tour, is that WizKids is committed to Dice Masters for the long haul.  They’ve invested time and money into redesigning the game, the entry point, and are preparing for a big launch this fall.  They’ve listened to the players and fans, taken feedback from retailers and distributors, and they want to see this game grow and succeed as much as we do!

If you are hungering for more info, be sure to check out The Ministry of Dice’s video about the redesign and Origin Packs…and tune in to A Double Double ‘n Dice on Monday, June 13 for another reveal.

There’s been a lot of chatter on this reveal already, but we want to continue the conversation.  Let us know in the comments below, on the Socials (@dmNorthTV), or join the conversation on our Discord, what you think about the redesign and what’s next for Dice Masters.